After briefly peeping above the all-time high last Tuesday, Bitcoin has spent the week finding a firm foothold around the $19K mark.

The market’s resilience is supported by growing acceptance of cryptocurrency among the biggest global companies. S&P Dow Jones Indices, the firm behind the famous market benchmarks, has announced that it will debut digital asset indexing for more than 550 of the top traded coins in 2021, and Visa has said it will be linking its network of 60 million merchants to the dollar stablecoin $USDC. 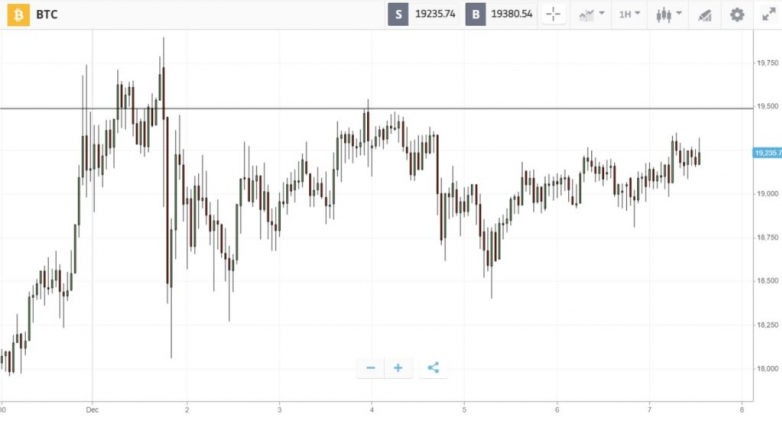 Institutional investors opting for Bitcoin over gold could cause the price to double in 2021, according to Bloomberg.

Analysts at the firm expect Bitcoin to hit $50K as the flow of institutional funds into crypto continues, driven by unconventional monetary policies designed to counter the coronavirus-induced slowdown.

The prediction follows a spate of similar forecasts from other institutional analysts. Bloomberg’s Mike McGlone said in October that the first-born crypto could hit $100K in 2025, and Citibank made an even bolder prediction in November, projecting a high of up to $318K in 2021.

Even as policymakers seek to make their mark on the rapidly growing crypto industry, Bitcoin is holding steady.

On Wednesday, Congresswoman Rashida Tlaib announced the STABLE Act that would effectively hold stablecoin issuers to some of the same standards as banks, which many argue would stifle innovation.

Elsewhere, Congresswoman Maxine Waters is calling on Biden to rescind progressive guidance that would let banks take custody of cryptocurrency. Yet as the news was released, Bitcoin didn’t even flinch, suggesting that any selling pressure was met with equal force from buyers.

After making the highest monthly close ever in November, Bitcoin has closed the first week of December even higher, breaking a new record and setting the stage for another upswing.

Now that Bitcoin has tested resistance at $9.5K three times, the wall of sell orders is likely to have been gradually eaten away, making it more possible that Bitcoin could soon break through and follow Wall St. indices to hit new highs.

In the coming week, several potential macroeconomic triggers could help push the market above this critical juncture, including continued economic stimulus discussions in both the US and Europe, the final stages of long running Brexit talks, and growing optimism around the rollout of the coronavirus vaccine.