US NFP numbers for May were worst-than-expected, as the United States only added 38,000 jobs during that month, according to the report published by the Labor Department, which absolutely put it below the 165K forecast. In terms of statistics, that's the weakest number of jobs released since September, 2010, and of course, it weightened on the Greenback, that is expecting a possible rate hike by the Federal Reserve in mid-july, at least an scenario that is still expected to happen by the Cleveland Fed Chairwoman, Loretta Mester, in a speech held during saturday after the US “black friday” of jobs numbers.

However, following the jobs sector numbers in the US, unemployment rate decreased to 4.7%, which means a number below the expectations of 4.9% for May. In a technical overview, EUR/USD closed the week with a huge bullish move and an afterwards consolidation above the 200 simple moving average at H4 chart, also confirming the bearish trend line breakout (projected from May 3rd high). A corrective move could be expected in coming days toward the 200 SMA, as it's facing-off a resistance around the 1.1348, but an upside continuation will lead the pair to test the resistance zone of 1.1431. 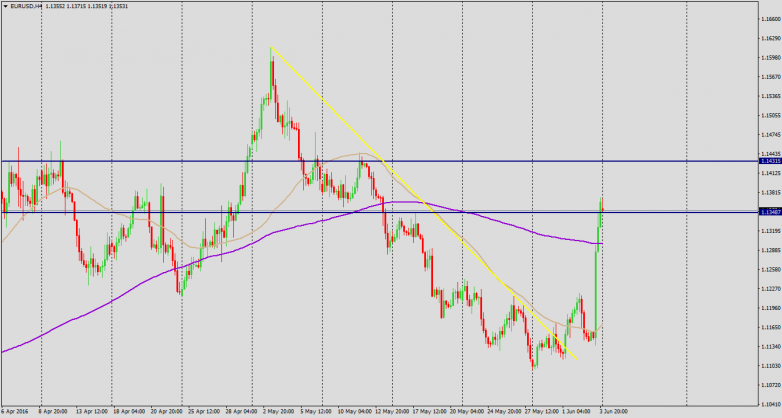