EUR/USD & Draghi's speech from Brussels: Will the upside be limited?

Today at 07:00 GMT the ECB's president Mario Draghi will speak at Brussels Economic Forum and investors will be aware of the tone that the speech will have, after Draghi decided to keep unchanged the interest rates for June and the European Central Bank started to buy corporate bonds, in an effort to revive the economic growth in Eurozone. Nothing great is expected in today Draghi's words, as it's expected that he still ask to governments to do more in favor of the region's growth.

However, as we saw during last ECB press conference held during last week, market could see some volatility. The H4 chart of EUR/USD shows that the pair is facing a strong resistance around the 1.1415 level and we highlighted with yellow color the move that last Draghi's speech produced on the major pair. A hawkish-than-expected speech will push the EUR/USD to break the 1.1415 zone, toward next resistance at the 1.1484 level, while a dovish or “nothing new” speech from Draghi could trigger a pullback to test the support level of 1.1342, which is very close to the 200 SMA. 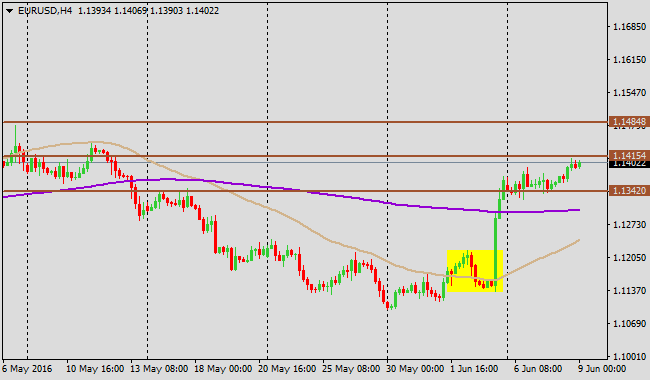