Today in Switzerland at 07:30 GMT will be released the Libor interest rate decision and SNB Chariman Thomas Jordan will speak at same time. It's expected that the current negative rates remains unchanged (-0.75% v -0.75%) on this quarterly meeting and the stance from Swiss National Bank to intervene in foreign exchange market when they think it should be necessary will be something that, at least in the short-term, cannot be changed as well.

The technical picture for USD/CHF at daily chart is showing some interesting patterns, as the pair has been reacting to the downside when the SNB meeting is done and as you may see on March 17th, it consolidated below the 200 SMA. Currently, it's facing a strong support zone around the 0.9586 level and while the Fed didn't push lower the pair (CHF strong) enough during wednesday's session, a breakout below the price zone 0.9586 towards the 0.9480 level in a mid-term basis cannot be discarded at this stage yet. However, if Jordan's words are very dovish, then it could rebound to the 50 SMA (0.9742). 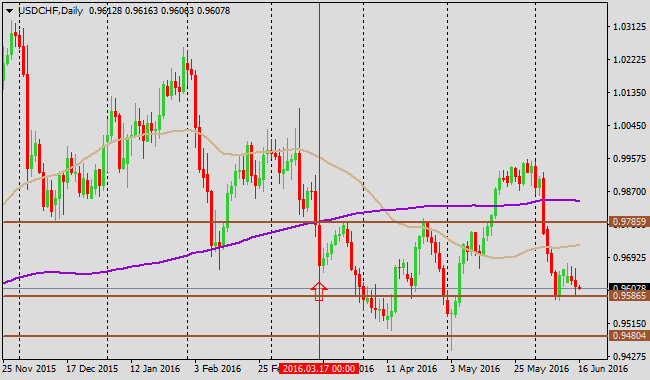