Last week USD/JPY tested 103.55, the lowest level since the end of August 2014. US dollar declined and Japanese yen gained as the Federal Reserve didn’t tighten monetary policy and the Bank of Japan announced no new monetary easing. In addition, traders were stressed by the risk of Brexit.

This week market’s risk sentiment improved as the fears that Britain will leave the European Union subsided. USD/JPY looks currently oversold and found support in the area of 50-month MA at 104.35. However, US dollar should remain under pressure until the market starts pricing in higher interest rates in the United States.

USD/JPY closed below the 200-week MA at 106.20 and 38.2% Fibonacci retracement. These levels now function as resistance. This makes the greenback vulnerable for a decline to the 100.70 mark – this is 50% Fibonacci. Japanese monetary authorities are not expected to do currency interventions until the pair is trading above this point. The big trend is still bearish. Only the increase above 110 and 110.15 will return power to the bulls. 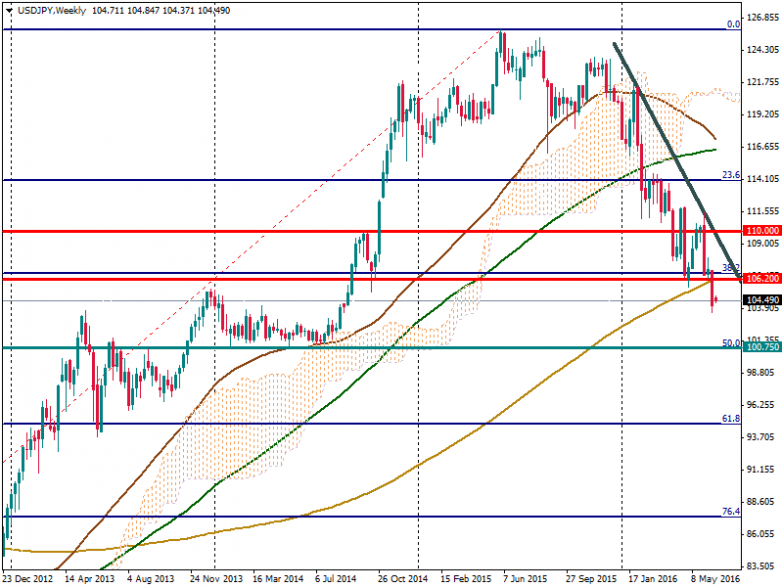 The Bank of Japan will release monetary policy minutes on Tuesday and Japan’s flash manufacturing PMI on Thursday. At the same time, risk sentiment will be the main driving force of the market. If Britain remains in the European Union, USD/JPY will get a chance to revisit the 110 mark - in case of Brexit we’ll see the pair closer to 100.