Today at 12:30 GMT will be released the Core Retail Sales indicator in Canada, which favors to have a positive reading from -0.3% to 0.7%, which is the latest consensus by analysts. Later at 14:30 GMT, we expect the reading from Crude Oil Inventories in United States, which could have a dip from -0.9M to -1.3M. Both indicators will be likely to move CAD pairs during wednesday session, but because of the Brexit's referendum that will take place this thursday, we should expect less volatility for USD/CAD after both indicators' release.

Technical overview for USD/CAD at H4 chart is calling for a bullish continuation, as it remains supported by a trend line plotted from the May 3rd lows. If Crude Oil inventories are within expectations, then it could build the ground to test the 200 SMA afterwards. However, if the reading is worst-than-expected, it could attempt to break the resistance level of 1.2953, while a better-than-expected can push the Loonie to test the support zone of 1.2678, which is below of trend line's zone. 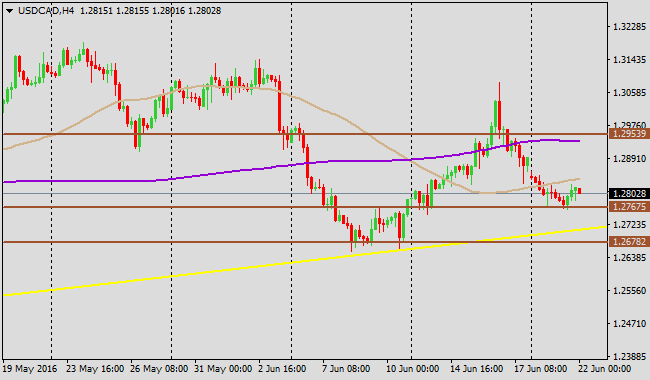