The NZD has been among the best performing currencies today, boosted mainly by weekend news that New Zealand’s real retail sales had jumped by 1.7% quarter-on-quarter in Q4 of 2014. This was the strongest rise in sales in two and a half years and easily beat the median forecast rise of 1.3%. Core sales were likewise strong, coming in at 1.5% vs. 1.1% expected. In addition, both the Q3 headline and core sales figures were revised higher by 0.1 percentage points each. What’s more, New Zealand’s performance services index reached the highest level since July after expanding for the eighth consecutive month. As a result, the AUD/NZD has now dropped to a fresh record low after taking out January’s low of 1.0350, while the NZD/USD has broken the key 0.7450 resistance level. There are plenty more macroeconomic pointers that could impact the NZD/USD this week, including Tuesday’s Global Dairy Trade auction and the FOMC meeting minutes on Wednesday. For a more comprehensive preview of this week’s data (and our fundamental and technical views on the FX, equity and commodity markets), read our usual Week Ahead preview HERE.

From a technical perspective, and as my colleague Matt Weller’s aptly titled article on Friday (“NZDUSD: Why the Rest of Q1 May Hinge on the .7450 Level”) suggested, the short term outlook on the Kiwi is now bullish, as it has broken back above the key 0.7450 resistance level. In addition to the base of an old, long-term, triple bottom pattern, this level also market the 38.2% Fibonacci retracement of the recent downswing (from point D on the chart).  As Matt suggested, now that we are back above this key 0.7450 support-turned-resistance level, a “stronger rally is likely on the failed breakdown.”

In fact, the NZD/USD gapped higher at the open overnight as the retail sales data were released before the open. There is thus the possibility for price to come back lower and fill this gap above 0.7450 before making its next move. Indeed, the next move from there could well be lower, such as a daily close back below 0.7450. If this happens, it would be significantly bearish development as it would suggest that there was a lack of conviction from the bulls to hold their ground above this critical juncture. Smelling blood, the bears may then absolutely crush this pair.

But if it continues to find fresh buying interest above 0.7450, which appear the more likely scenario, then it may make a move towards the next key resistance at 0.7615/20 soon. As well as old support, this is where the 50-day moving average meets the 61.8% Fibonacci level of the last downswing. En route to that target lies the 50% retracement a 0.7530/5 which may offer some resistance in the short-term. A potential rally above 0.7615/20 would obviously be another bullish development, but the longer-term bearish trend would still remain in place for as long as the downward-sloping trend line is intact. 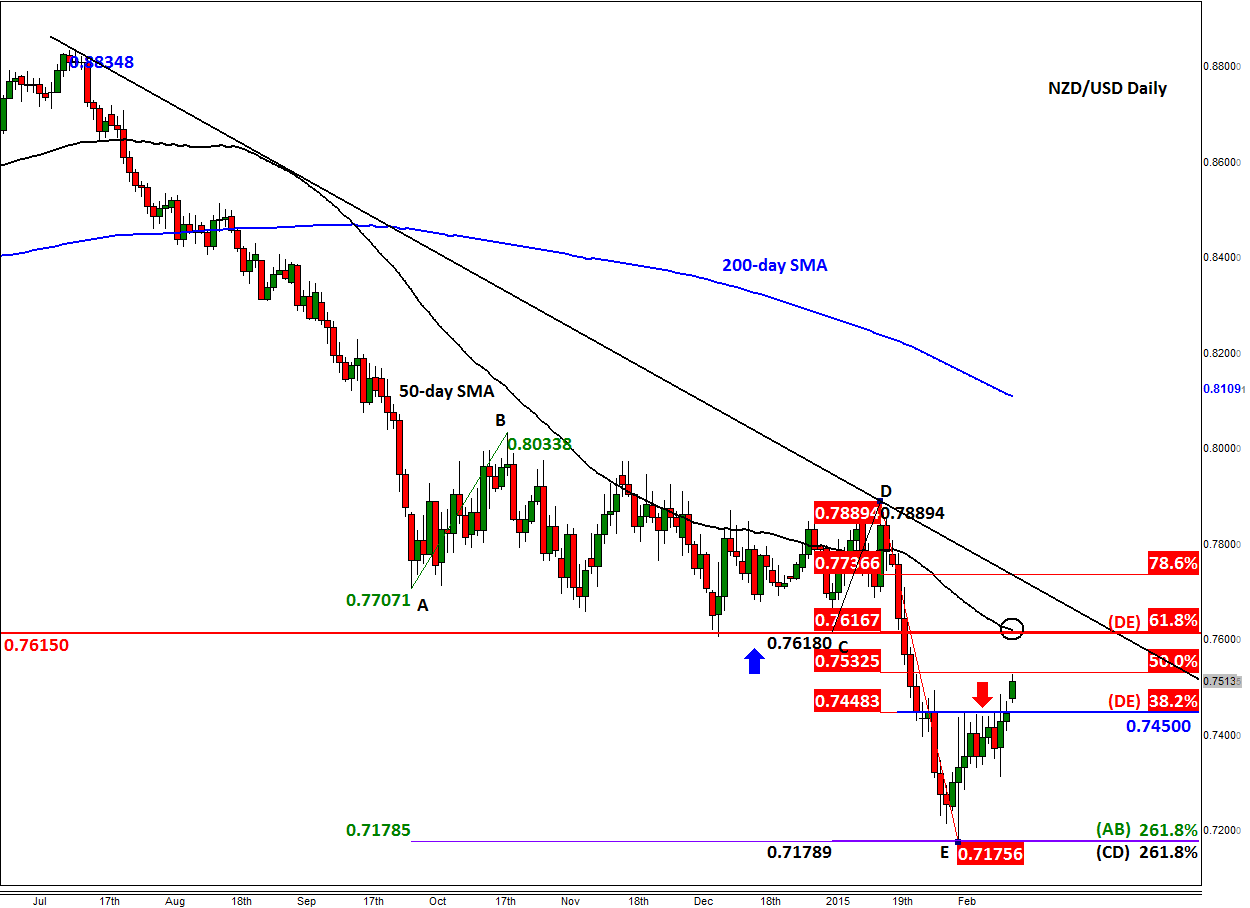