RBA Preview: interest rates and the aussie are expected to drop

It’s going to be such an eventful week for the Australian dollar that it may set the tone for weeks to come. There is a deluge of economic data due from Australia, China and the US, as well the constant threat of the storm clouds hanging over Europe. The most important event for the Australian dollar however, is a monetary policy meeting at the Reserve Bank of Australia (RBA) on Tuesday.

To cut, or not to cut

There is even more uncertainty surrounding this week’s policy meeting than there was in the days prior to the RBA’s meeting in February. At that meeting the RBA decided to move the official cash rate for the first time since July, 2007. It was a lineball decision that could have easily resulted in the bank remaining on hold, as opposed to lobbing 25bps off the cash rate. Inevitably, the RBA decided that the Australian economy required more stimulus and the benefits of a lower OCR outweighed the threat of a bubble in residential property prices.

This time around the RBA must decide if even more stimulus is needed in light of some soft economic data and heightened concern about Australia’s growth and inflation outlooks. One of the most concerning pieces of economic data was Australia’s labour market report for January. Australia’s unemployment rate unexpectedly jumped to 6.4% in January (expected 6.2%) from 6.1% in December as 28.1K full-time jobs disappeared. Despite the possibility that this data was somewhat distorted by statistical volatility, it was still enough to spark calls for back-to-back interest rate cuts.

However, as the shock of the employment numbers began to wear off, the market slowly began to discount the idea that the RBA would loosen policy further in March. That was until the release of Australia’s private capital expenditure figures for last quarter. Private capital expenditure fell 2.2% last quarter, missing an expected 1.6% drop, and investment intentions for the year also underwhelmed expectations.

Not a question of if, but when

Even prior to this deluge of disappointing economic data the RBA’s own quarterly report indicated that it was anticipating the need for further monetary policy loosening, despite a lower Australian dollar and some reservations about the diminishing effectiveness of lower interest rates. So, it’s really not a question of if the RBA will cut another 25bps off the official cash rate, but when. After last week’s disappointing CAPEX figures, the market is pricing in just over a 55% chance of lower interest rates in March, at least according to the OIS market. Most market commentators, including FOREX.com, are a little more confident that the RBA will cut the official cash rate to 2.00% on Tuesday.

What does this mean for the Australian dollar?

The uncertainty regarding the outcome of this week’s policy meeting at the RBA means that we may see some big moves in the Australian dollar on the back of the bank’s decision, no matter what it decides. As we have previously stated, we put a higher probability on the RBA cutting the OFC than leaving it unchanged, which may keep AUDUSD on the back foot.

There is the possibility that the RBA may maintain an almost-neutral bias and cut interest rates to 2.00% due to the diminishing ability of further policy loosening to effectively support growth and inflation outcomes. Yet, this would be dangerous for the bank’s outlook for an even weaker Australian dollar, as it may place a matching floor on AUD weakness. The most effective strategy would be for the RBA to adopt at least a slight easing bias if it cuts interest rates, keeping the door open for further AUD downside. In the event it does this, AUDUSD may break out of its medium-term upward trend and begin a push towards its 5.5-year low around 0.7625. 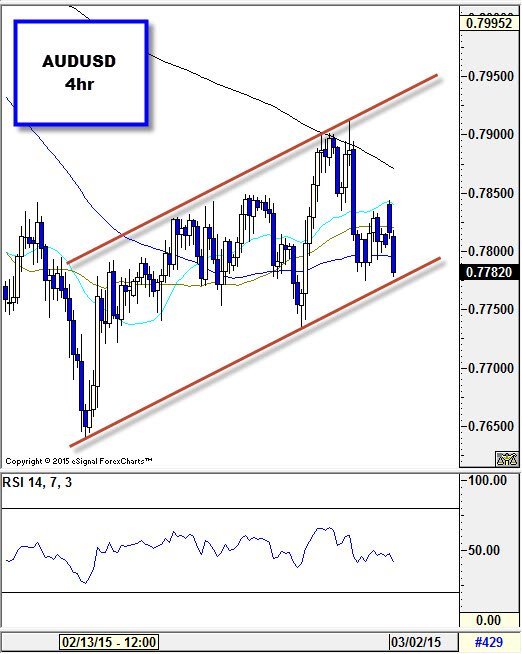 Other economic data to watch out for when trading AUDUSD