Nothing can save the aussie today

It has been a horrible day for the Australian dollar as the market prepares for tomorrow’s policy meeting at the RBA. As we stated in our RBA preview, we expect the bank to cut the official cash rate by 25bps, bringing it to a record low 2.00%. The market is also coming around to the notion that the RBA will move to loosen monetary policy this month, which is preventing the Australian dollar from benefiting from some better than expected Chinese economic data and news that the People’s Bank of China (PBoC) cut benchmark interest rates.

The PBoC cut the benchmark one-year lending rate by 25bps to 5.35% and the one-year deposit rate by the same amount to 2.5% on Saturday. This is the second time the PBoC has cut interest rates in three months in response to softening economic conditions and a deteriorating property market. Using the cut in November as a guide, it’s hard to see how this latest move will have a material positive effect on growth. It did have a big effect on the yuan with USDCNY falling to its lowest level since October, 2012.

The big other macro-news from China came from the manufacturing sector. China’s official Manufacturing PMI remained in contraction territory in February, after falling to its lowest level since mid-2012 in January. The index jumped to 49.9 from 49.8, which was slightly better than the market was expecting. HSBC also released its Manufacturing PMI for February, which was uncharacteristically much more optimistic than the official figures. The private sector Index jumped to 50.7 from 50.1 (expected 50.1). 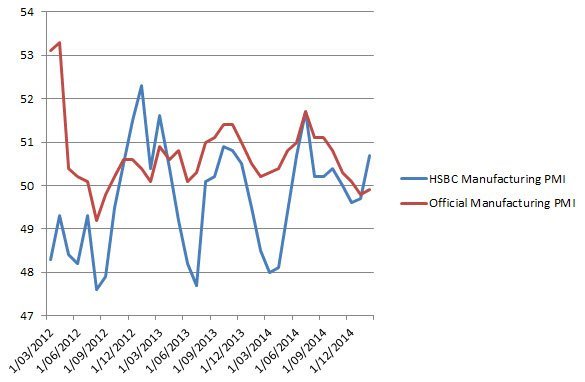 Despite this news out of China, AUDUSD took a beating today as investors priced-in a greater chance of further monetary policy loosening in Australia. The pair drifted below 0.7800 and the sell-off only stopped once it hit a support zone around 0.7760. Even in the wake of this latest sell-off our bias remains lower in anticipation of an interest rate cut tomorrow.