IBEX looking bullish ahead of ECB

After a small hiccup at the start of this month, it looks like the European equity market bull trend has already resumed. Speculators are betting that the European Central Bank will not make any alterations to the €60 billion a month of bond purchases it is planning to launch this month, even if the Eurozone’s economic fundamentals have improved since the bank’s last meeting in January. Indeed, today’s meeting is unlikely to offer many surprises, so the focus will be on the details of the QE programme.  Mario Draghi’s remarks would be closely watched too and if he sounds dovish at the ECB press conference then that may cause the European benchmark government bond yields to hit fresh record lows, thus making higher-yielding equities more attractive.

The ECB’s QE programme is the primary reason for our bullish view on the European markets. If the US is anything to go by then some of the European stock markets have a lot of catching up to do as the ECB’s actions help to push bond yields further lower and, in some cases, into the negative territory. Yield-seeking investors are left with little choice but to invest into the stock markets as the returns on other investments are simply too low or come with undesirably high risks.

In fact, as things stand, the technical outlook on the European indices looks bullish across the board. The DAX, for example, has already hit a fresh record high today, so there is no technical reason to be bearish on the German index. The UK’s FTSE has broken back above the 6900 level and it looks poised for a rally towards 7000. In France, the CAC is now just shy of 5,000 as it continues to make up lost ground. And the next major stock index likely to break out is Spain’s IBEX: 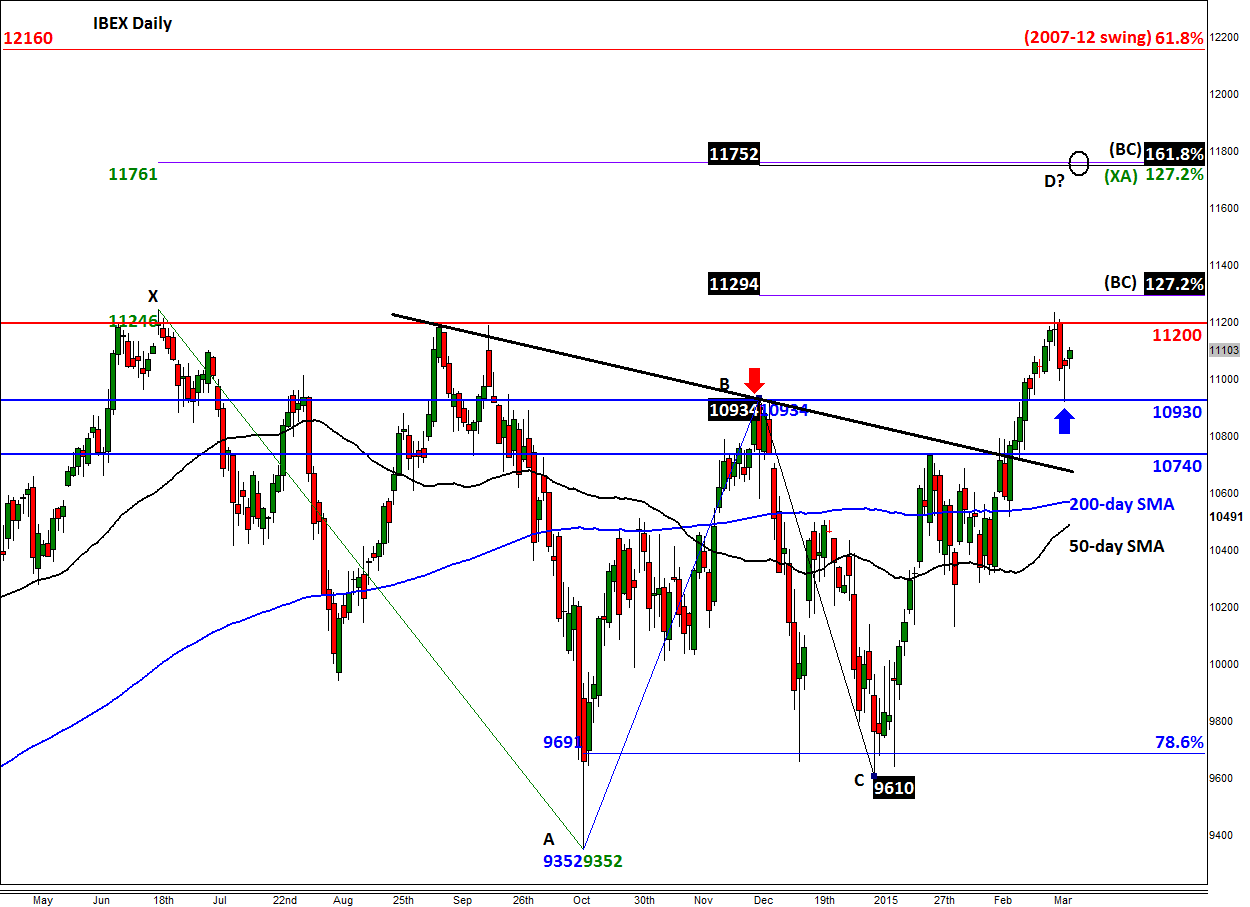 As can be seen on the daily chart, above, the IBEX has recently broken above its main moving averages and also a bearish trend line. The breakout was confirmed once the prior high around 10740 was cleared. It has since been moving higher, breaking further resistance levels such as 10930/5. But as mentioned, the rally paused at the start of this month as speculators took profit around the 11200 handle, which has been a major resistance level in the past. Thankfully for bulls, the broken resistance at 10930/5 has now turned into support. Therefore, the short-term bullish trend is still intact and will remain so unless it closes below 10930/5, in which case we may see a more profound correction towards 10740.

Meanwhile, an eventual break through the 11200 level could target 11750/60. This is where the 127.2 and 161.8 per cent Fibonacci extension levels of the last two downswings converge. From there, it may pullback a little on profit-taking before potentially pushing higher again towards long-term 61.8% Fibonacci retracement of the downswing from the 2007 crash, around 12160. The monthly chart, below, which shows the IBEX has been in an upward trend since bottoming out in 2012, looks even more bullish. In recent months, the index has consolidated in a relatively tight range below the 11200 handle, suggesting that it may be gearing up for a potential breakout towards that 61.8% Fibonacci retracement level and potentially beyond.