The Turkish lira has fallen to another record low versus the USD on Thursday as President Erdogan and other government officials attempt to put pressure on the Turkish central bank to cut interest rates, and reverse last year’s hikes.

The market’s dislike of the TRY right now is two-fold: firstly lower interest rates tend to weaken a currency; secondly, the government is calling for lower interest rates at the same time as inflation remains at a relatively high 7.55% and has been picking up recently. Lastly, and perhaps most importantly, the market doesn’t like it when central banks get pressurised by politicians especially as there is a General Election in June.

As President Erodgan has expanded his own powers in recent years, the market is taking a dim view of his encroachment into monetary policy and the risk is that he could stir a currency crisis. Will the head of the Turkish central bank, Erdem Basci, be able to resist the government’s demands and make his own decision at the next central bank meeting on March 17th meeting? The latest press reports suggest that Basci could resign, which could make this crisis even worse and send the Lira even lower in the medium-term.

A delicate time for EM FX:

The sell-off in the TRY comes at a delicate time for the emerging market space in general. The EM FX space has been coming under pressure since the start of the year, with 20 out of 24 currencies included in a Bloomberg Emerging Market basket losing ground to the dollar since the start of the year. The TRY is the second worst performer behind the Brazilian Real, and is down nearly 10% so far this year.

The EM FX space is at risk from a potential rate hike from the Federal Reserve and a stronger dollar. Back in 2013 the EM FX space experienced a “taper tantrum” when the Fed said it would scale back on its asset purchase programme.

The trouble for a country like Turkey is that its debts denominated in USD have been surging. Turkey’s gross external debt surged last year, and has become more expensive to service as the Lira has lost value. Although overall public debt levels remain low at 36.6%, external debts denominated in foreign currency have risen, which leaves the country vulnerable to a currency crisis.

Unfortunately, this homemade crisis ahead of elections later this year has eclipsed what could have been an economic boost for Turkey. The benefits of a lower oil price and falling price pressures have been reversed by the falling lira and the upward pressure on import prices, which could weigh on growth later this year.

It seems like the market is only interested in one direction when it comes to the lira, and that is lower. The fundamental back drop is weak, the political situation is troubling and if the central bank governor does resign in the coming days, or bows to pressure from the government, then this could trigger another leg higher for USDTRY.

We list the key things you need to consider if you are trading the Lira right now:

Overall, a weaker lira is bad news for the economy (import inflation) and it could make servicing Turkey’s debt more expensive. While we don’t think that Turkey is likely to have difficulty paying its debts, as they are still a fairly manageable size, the government is the biggest risk to the TRY right now, and since its actions are difficult to predict we could see the TRY come under pressure for some time yet. 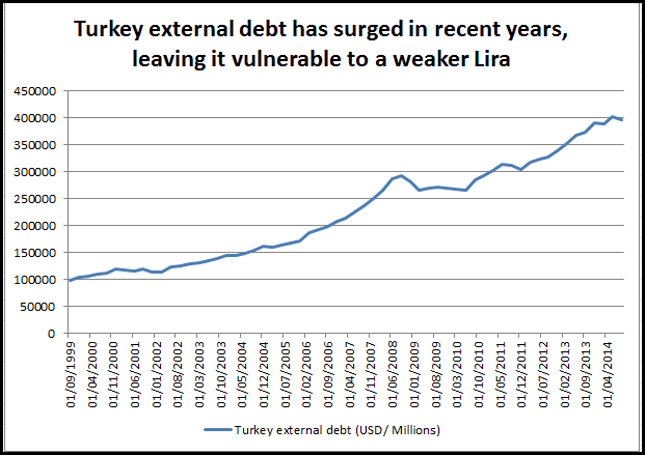