The NZ dollar is looking even more nervous than usual today, largely because it is preparing for a monetary policy meeting at the RBNZ later this week. The NZD began the week on the back foot due to widespread USD strength on the back of Friday’s strong US employment report, and some bearish comments for PM Key today haven’t helped the situation.

The PM stated that the RBNZ was looking at different tools to offset the need for tighter monetary policy. The bank has previously stated that it is looking at using new macro-prudential tools to prevent over-inflation in the housing market (see: RBNZ derails NZDJPY’s rally), but the market is easily spooked at the moment; hence the reaction of the kiwi.

This NZD sell-off has pushed AUDNZD to a critical short-term resistance zone around 1.0500. It looks like some orders are being up around this level and a break here could inspire a push even higher. Beyond 1.0500 there may be further resistance around 1.0610/15 and then 1.0800.

As we have stated in the past, our long-term view for this pair isn’t very constructive, but we can see short/medium-term strength. The pair has tendency to rally after making a new all-time low and the short-term fundamentals may favour AUD. The introduction of tools to cool the housing market would likely push out expectations for another rate hike in NZ, but this must be weighed against the possibility of further policy loosening in Australia, hence over short-medium term view. 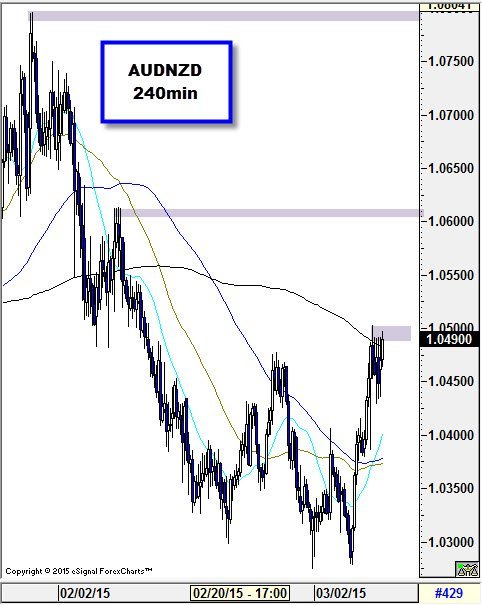