Nearly two years ago, then-Fed Chairman Ben Bernanke (remember him?) suggested that the Federal Reserve was planning to gradually reduce the pace of its Quantitative Easing, a process that quickly became known as “tapering.” The markets reacted strongly to this announcement, with US yields and the US dollar rising sharply, especially against emerging market currencies that were dependent on the vast pool of global liquidity. In the cleverest turn-of-phrase since “Grexit,” this reaction came to be known as the “taper tantrum.”

Though Fed’s taper is now well behind us, traders are throwing another “tantrum” of sorts as Friday’s strong jobs report has put a potential Fed rate hike on the table as soon as June. Just like with the taper tantrum in 2013, US treasury yields have spiked and the dollar is gaining across the board, including a particularly strong rise against EM currencies. While it doesn’t roll off the tongue as easily as “taper tantrum,” I’d like to go first on the record dubbing the recent reaction the “Fed Rate Hike Hissy Fit.”

Then and Now: Taper Tantrum vs. Rate Hike Hissy Fit

Of course, much has changed in the past two years. One big difference is that Europe and Japan have introduced (in the case of Europe) or dramatically increased (in the case of Japan) massive new stimulus programs, partially offsetting the impact of potential tightening by the Fed. At the same time, the precipitous drop in oil prices has reduced the current account deficits of many oil-importing emerging markets. Despite the new wave of global liquidity and lower oil prices though, many of the most vulnerable EM currencies from last panic are arguably more vulnerable this time around.

Which EM Currencies are Most at Risk?

One currency at risk of falling into the market’s crosshairs is the Turkish Lira. We’ve already noted traders’ growing concern with the central bank’s independence, but Turkey’s current account deficit has only worsened over the past few years, with the latest data showing a monthly deficit of -6.8B USD vs. around -5.0B USD back in 2013. This massive deficit in goods and services means that Turkey is heavily reliant on maintaining a capital account surplus (investors buying financial assets in Turkey), a prospect that is starting to look increasingly dubious. USDTRY recently hit a new all-time high at 2.64, but if the Fed becomes more vocal in its plans to raise rates sooner rather than later, bulls could target 2.70 or 2.80 next. The recent big breakdown in the South African rand and Brazilian real leaves means that those two currencies could be in trouble as well. 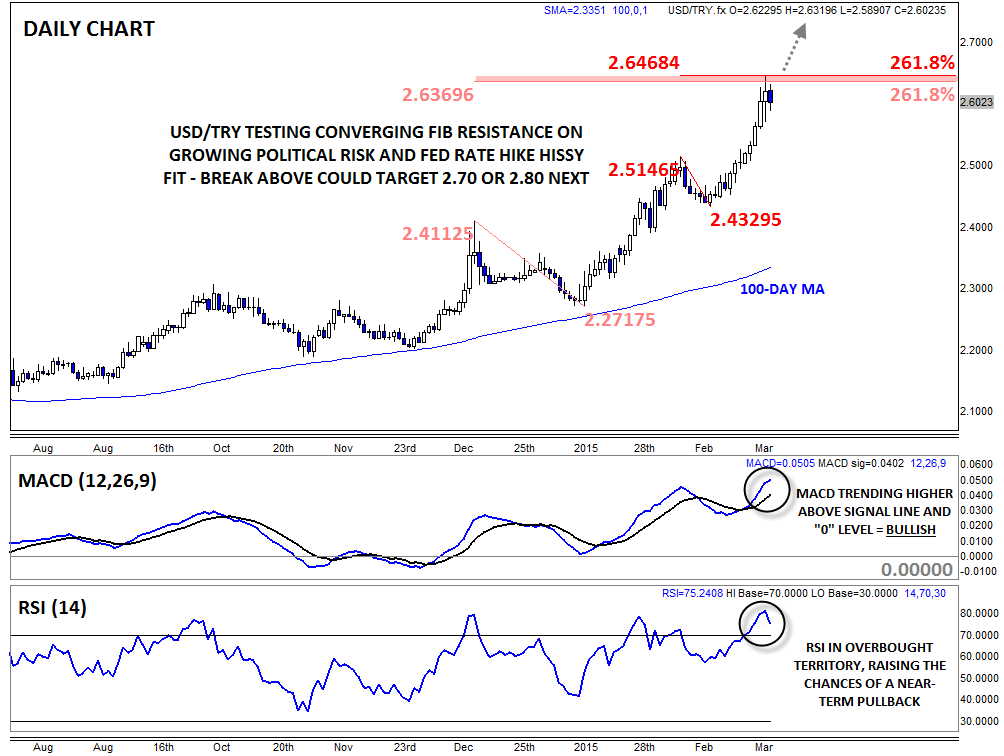