The European stock markets are under pressure today and the FTSE is down for the third consecutive day with a loss of 1.2% so far. Sentiment has been hit by a number of factors, not least the return of “Grexit” fears after the troubled nation was accused of time wasting by the head of the Eurogroup, Jeroen Dijsselbloem, and as the idea of a referendum was floated by Greece’s Finance Minister Yanis Varoufakis. Greece will resume talks with its creditors on Wednesday and although the consensus is that it will eventually be able to gain access to part of its remaining bailout funds, any further delay in the negotiations will undoubtedly unnerve some traders. Investors are also concerned about the emerging market currency rout with the Mexican Peso hitting a fresh low versus the dollar today; fears about Chinese deflation, uncertainty about the outcome of the UK election and an earlier than expected rate hike from the Federal Reserve, among other factors. On top of this, the major indices have come under pressure amid technical selling and as some bullish speculators booked profit following the recent upsurge. Nonetheless, now that the ECB has started QE, this may help to limit the losses for European shares. On top of this, there has been evidence of economic growth in the euro zone of late. As a result, we are fundamentally bullish on European equities over the long-term.

As mentioned, the FTSE’s selling can in part be explained by technical selling. Specifically, it was the lack of bullish interest above the 6900 handle which has really discouraged some speculators. As can be seen on the chart, the index had consolidated in a tight range for a significant amount of time prior to its eventual break through this barrier. This had raised hopes that the index of top UK shares was gearing up for a major rally and finally catch up with the likes of the German DAX index or the S&P 500 on Wall Street.  Though it did rally to a fresh all-time high, it was only a mere 75 points above the 6900 which therefore meant that the psychological barrier of 7000 remained out of reach yet again. As traders realised there wasn’t much juice left in that rally, they started paring back some of their bullish bets.  Eventually, the withdrawal of bids caused the FTSE to break back below 6900, which probably encouraged further follow-up technical selling.

As a result of the sell-off, the FTSE is now trading in no man’s land after another support at 6860 was taken out. The next logical support is at 6750/5 where the 50-day moving average meets a resistance-turned-support level. Below that level is the 200-day moving average, at 6885, followed by another resistance-turned-support level at 6655 and then the 38.2% Fibonacci retracement level of the upswing from the October low, at 6630. The above-mentioned broken supports at 6860 and 6900 may now turn into resistance. However, if they don’t, then the rally towards that elusive 7000 hurdle could be back on. 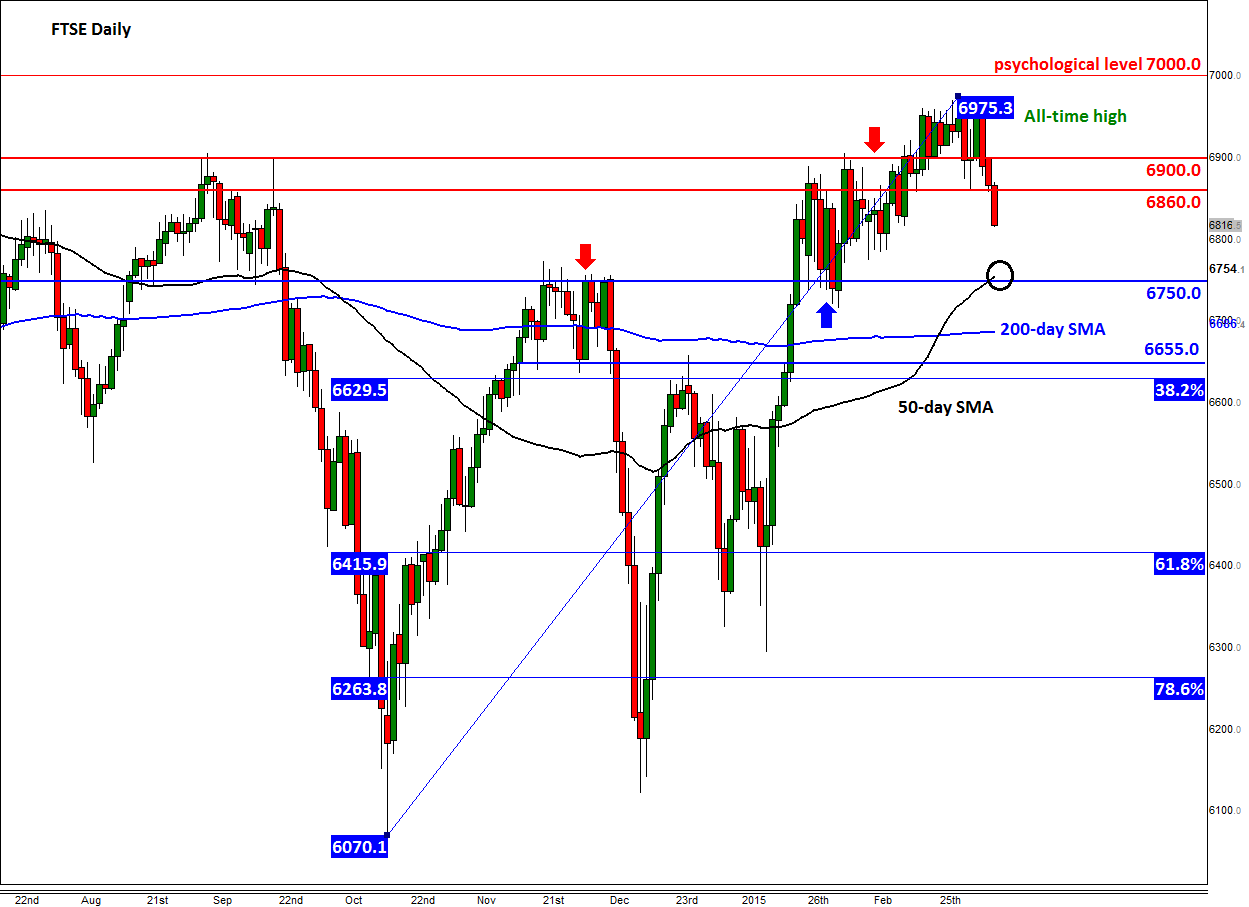