It’s been a relatively slow start to the last trading of the week. From a price action perspective, the dollar is gaining some ground against both the euro and pound while WTI has fallen to a new six-week low near 46.00. Meanwhile, today’s economic data has been disappointing for global growth optimists. The US February Producer Price Index (PPI) was abysmal, printing at -0.5% against a 0.3% gain expected. This marked the biggest miss relative to expectations since April 2009, and suggests that the US economy is “importing” the deflationary pressures emanating from Europe and Japan. More to the point, the weak PPI report has thrown some cold water on the June-Fed-rate-hike crowd ahead of next week’s highly anticipate FOMC meeting and press conference.

North of the 49th parallel, Canada’s jobs report also looked weak at first glance. According to Statistics Canada, employment fell by 1k last month, and the unemployment rate ticked up from 6.6% to 6.8%. Taking a look  under the hood reveals a slightly more optimistic picture though. For instance, the tick higher in the unemployment rate was driven by a rise in the participation rate, which is generally seen as a sign of optimism about the labor market. Meanwhile, full-time jobs actually rose on the month, meaning that the small decline was due to a decrease in part-time jobs, which is obviously less damaging for the economy as a whole. As of writing, USDCAD is not reacting meaningfully to these reports, suggesting that the big breakout from the 1.2350-1.2800 range that we mentioned on Monday may have to wait until next week.

After the disappointing US PPI report, immediate dollar strength may not be on the menu for today. That said, USDJPY will still be a key pair to watch for a possible bullish breakout next week. The pair briefly peeked out to a new 7.5-year high above 121.80 on Tuesday, and rates are now holding just below that barrier. While today’s weak PPI reading could provide a reason for the Fed to delay rate hikes, we still feel it’s likely that the central bank will drop its patient pledge in order to maximize its flexibility, which could lend some strength to the dollar.

On a technical basis, the pair has been trending higher since bottoming in mid-January, and the rising MACD and RSI indicators support that near-term bullish perspective. If we do see a breakout from the 4-month range next week, bulls could look to target the Fibonacci extensions of the December pullback at 123.55 (127.2%) or 125.70 (161.8%). Of course, we could also see the dollar pullback in the wake of the Fed’s meeting, either if the FOMC leaves “patient” in its statement or in a “buy the rumor, sell the news” reaction. In that case, USDJPY could pullback to its near-term bullish trend line at 119.70 or the 100-day MA near 118.00. 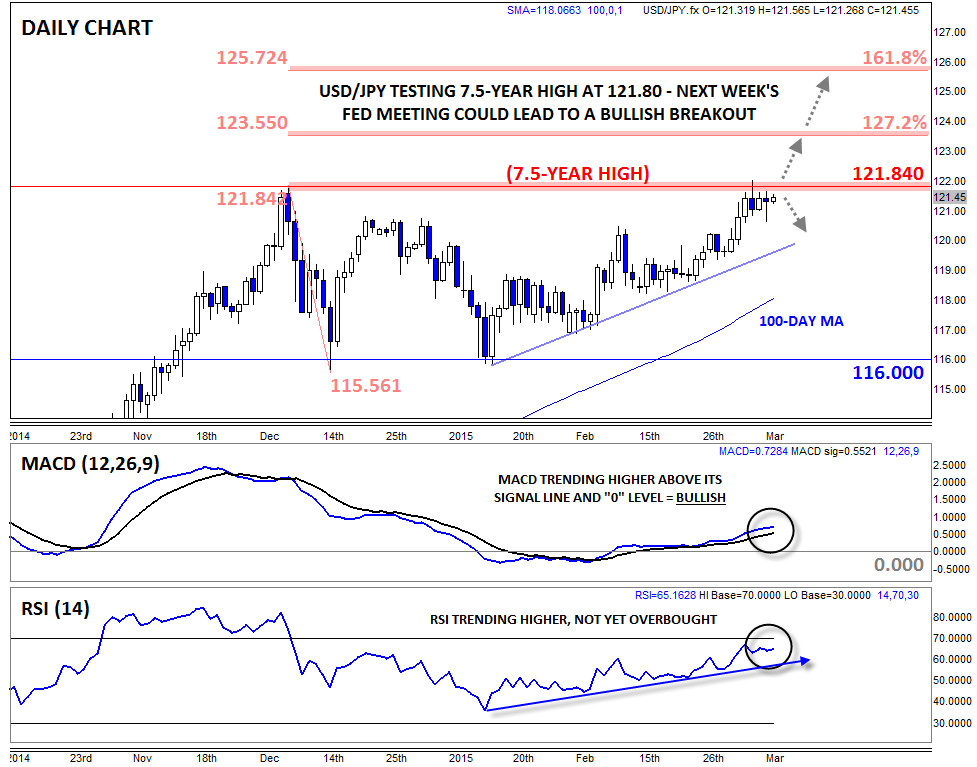