The three factors that may spur a NZD rally…

It has been a light start to the week in regards to data releases, but this didn’t stop a US dollar sell-off mid-way through the Asia session. The retracement helped to push EURUSD back above 1.0500 and has helped the other major currencies regain some lost ground against the US dollar. NZDUSD was propelled around 40 pips higher as it rallied off an important short-term support zone just below 0.7320.

With the RBNZ’s interest rate decision out of the way, kiwi traders are eyeing dairy price and growth data due out later this week…

1. Stable rates should support the kiwi

The kiwi’s fundamental backdrop was bolstered last week by the RBNZ’s decision to rule-out looser monetary policy in the near-term. Governor Wheeler did note that “future interest rate adjustments, either up or down, will depend on the emerging flow of economic data”, but it appears the bank is content to remain on the sidelines for the time being. The anticipation of stable rates in NZ is a major asset for the kiwi against other currencies that are home to central banks with a clear easing bias, including its trans-Tasman neighbour Australia. It will also help the NZ dollar to weather the US dollar strength story that is dominating the FX market at the moment.

Another key factor that differentiates the kiwi from other major commodity currencies is that key commodity prices in NZ are strengthening, while those in other commodity-based countries are still softening or holding at historically weak levels (Australia with iron ore and coal and Canada with oil). The recent strength of NZ’s key export commodities has been highlighted by surging auction prices as measured by the GlobalDairyTrade Index. The GDT will release another set of auction figures for dairy prices on Wednesday morning.

This will be followed by the release of NZ’s Q4 GDP numbers on Thursday at 0845AEST. According to Bloomberg, the market is expecting a growth rate of around 0.8% q/q, which is slightly less than the prior quarter’s 1.0% jump but is the same as the RBNZ’s latest forecast from its most recent MPS. The NZ economy, backed by its very strong labour market, is the standout advanced economy and we expect this to show in the data. Although, economic data from Q4 wasn’t overly impressive and may have put a damper on growth. On balance, we agree with the RBNZ’s and the market’s estimate for growth in Q4, which should support the NZ dollar in the long-run.

From a technical perspective NZDUSD is in neutral territory at the moment. The RBNZ’s decision and this most recent USD sell-off pushed the pair out of bearish territory. If this week’s deluge of NZD related data beats expectations it may give NZD bulls the fuel needed to overcome the bears. Of course, this will have to be weighed against moves in the US dollar, with this week’s policy meeting at the FOMC the big event of the week. While we aren’t expecting any major surprises from the Fed, it may become more uncomfortable with the recent strength in the US dollar in light of disappointing non-labour market US economic data. This could combine nicely with the aforementioned possible NZD strength to support a strong rally in NZDUSD. 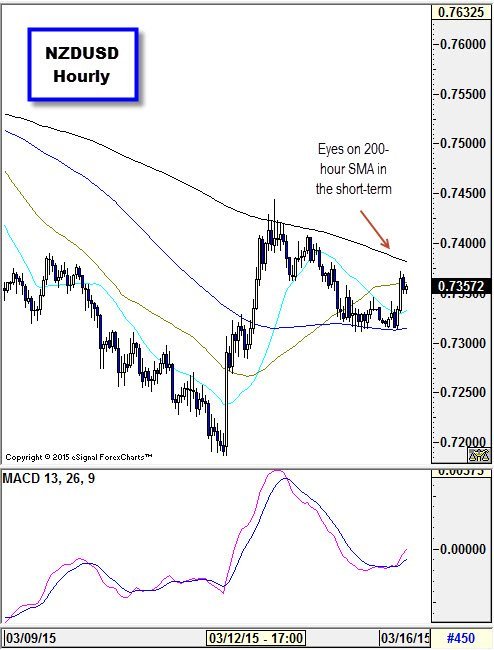