The FTSE is outperforming European indices for once. Although the UK benchmark index is off its earlier highs and is trading flat at the time of this writing, it is still doing much better today than, say, Germany’s DAX index which is off by a good 1.2% and threatening to fall further lower. Profit-taking is weighing on the European indices after the recent strong gains. This was triggered by the release of the German ZEW Economic Sentiment index, which, at 54.8, came in below the expected reading of 58.9 and only slightly above February’s 53.0 print. In addition, the euro is a touch firmer and given the single currency’s recent negative correlation with European shares, this too is having some impact on the markets. The EUR/USD is likely to remain range bound until after the release of the FOMC statement on Wednesday in which the Fed is likely to drop the word “patient” used to describe the eventual first interest rate hike. If the Fed is no longer “patient”, it may increase speculation that the central bank will increase interest rates by as early as June, and cause the dollar to rally and the EUR/USD to slump. This in turn may help to underpin European stocks. But the potential gains could be short-lived for European stocks as further appreciation in the dollar may help to exacerbate the emerging market currency turmoil and lead to all kinds of problems. Meanwhile as far as the FTSE is concerned, we’ve had some individual company news this morning that have also helped to provide the index some support. Although Sainsbury’s sales fell for the fifth consecutive quarter, the latest drop was not as bad as some had feared. Shares in the world's biggest miner, BHP Billiton, rose after it announced plans to spin off South32 – which is a group of non-core assets. However another miner, Antofagasta, dropped to the bottom of the FTSE with a 3.8% decline after it reported lower than expected earnings.

The FTSE’s technical outlook appears more constructive after the buyers recently managed to hold their ground above the 200-day moving average at 6685. That said however the index still needs to break above the prior pivotal levels of 6860 and 6900 before the bullish trend can be confirmed. If the sellers do not step back in there then this could give rise to further follow-up technical buying towards at least the prior record high of 6975. A potential break above 6975 would be a major technical breakthrough; in this scenario we could easily see the index break through the psychological barrier of 7000 before pushing higher. Meanwhile things could get ugly if the index goes on to break back below the 6750 support level. In that case, a drop all the way to the next support at 6655 could become a possibility. 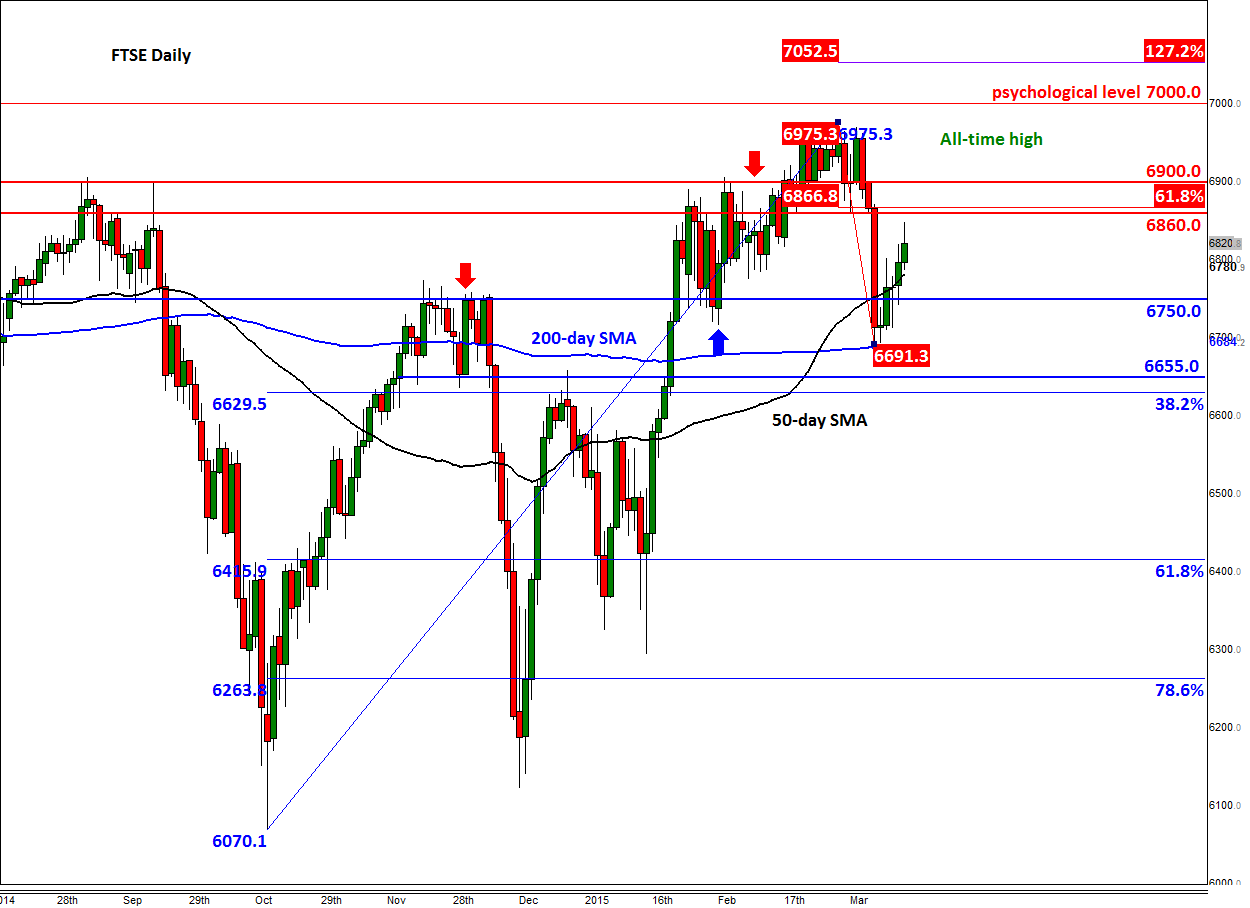