NZDUSD: Waiting Patiently for the Fed

Early North American trade has been much more pessimistic today than yesterday which saw equity markets stretch for gains over 1%.  So far stocks are turning lower which has continued the recent habit for good days followed by bad days and vice versa.  Much of the indecision is most likely in anticipation of the Federal Reserve’s monetary policy decision that will be released tomorrow afternoon where they are expected to remove the word “patient” from the statement.  The question that is on everyone’s mind though is whether they will signal that an interest rate hike is imminent, or whether the string of underperforming US data points of late will make them use a synonym of “patient”.  The significance of that verbiage is the central theme in the eyes of investors and could influence markets accordingly.

The Fed’s word play will also have a significant impact on currencies as well.  As my colleague Matt Weller noted in his FOMC Preview earlier today, an optimistic Fed could make the USD become the greatest thing since sliced bread.  The USD would probably gain against virtually every other currency on the planet as an imminent rate hike in June would be the most likely conclusion if they lean more toward the positive side of the ledger.  However, that outcome is anything but certain mainly due to the Fed’s recent history of erring more on the side of caution than anything else.  Remember, the Fed has kept interest rates on the lower bound for nearly six and a half years now even though the US has been technically out of the recession since the second quarter of 2009, and it has gained back more jobs than were lost during the Great Recession.  Simply judging by historical precedence would seem to indicate the Fed will be more prone to wait even longer, but rates eventually have to go up at some point; now may be as good a time as any.

The idea of now being an opportune time to signal a rate hike may start to permeate market thought over the next 26 hours as we approach the Fed’s statement.  Therefore, there may be some USD strength heading in to the event.  However, that opens the door to a lot of disappointment when the statement is released, especially if it is opaque in its intentions.  I could easily imagine them unleashing a line like this: “Based on its current assessment, the Committee judges that it can utilize forbearance in normalizing the stance of monetary policy.”  Notice that “forbearance” is simply another way of saying “patience” which could throw the USD for a loop and probably bump the stock market higher.

One currency pair that could be setting up technically for this event is the NZD/USD.  After the Reserve Bank of New Zealand signaled they would be remaining static for an extended period of time last week, the NZD has been relatively strong.  Some of that strength has been retraced over the last few days, but could be renewed if the USD were to take a Fed related hit.  Fortuitously, the NZD/USD appears to be falling toward a combination Fibonacci retracement (78.6% of XA) and extension (161.8% of BC) near 0.7250 where a Bullish Gartley pattern would complete.  If that pattern timing rings true, the support could be found mere hours before the Fed makes their intentions known and could be the base for a strong rally thereafter. 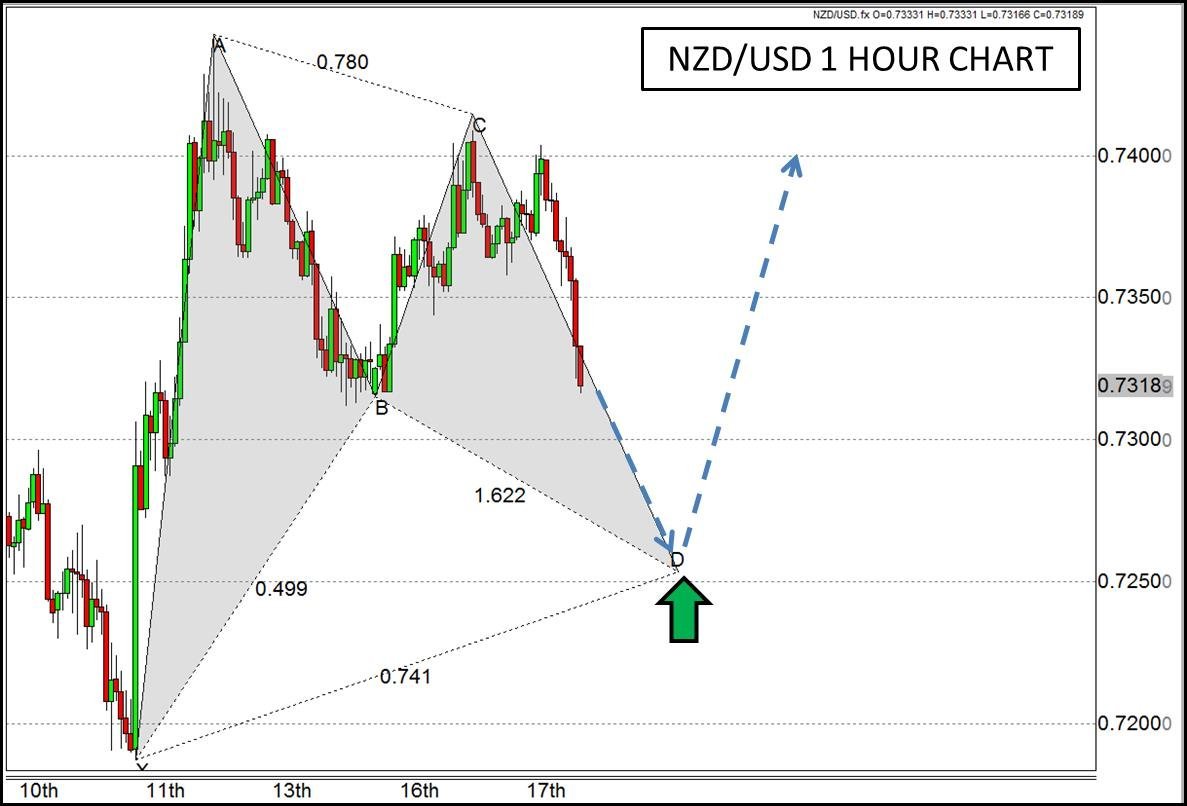