GBPUSD has fallen to a fresh near 5-year low on the back of disappointing labour market data. Labour market data, and particularly wage data, which slipped from 2.1% in Dec to 1.8% in Jan, put the boot in the pound. Excluding bonuses, wage data was even weaker at a mere 1.6% vs. 1.7% in Dec.

Although the FX market has taken this report as another reason to sell the pound, which slipped below 1.4700 on its release, this report suggests that the UK labour market is still extremely strong. For example:

January wage data is usually boosted by bonuses that tend to be paid at the start of the year. Not so in 2015. The decline in bonuses could be down to the rise in workforce participation, i.e., there were more people trying to get a slice of the bonus cake. Also, we need to remember that real wages, when adjusted for inflation, continue to grow due to falling inflation. Of course, today’s data pushes back a BOE rate hike, as the Bank is likely to await evidence that strong jobs growth is feeding into wage packets before hiking rates, however we expect wages to pick up in the coming months.

Today’s wage data might make the UK Chancellor George Osborne uncomfortable as he delivers the last Budget before the election, but the fall in UK prices can help to lessen some of the effects of Britain’s stagnant wage growth.  Read our UK budget preview HERE.

The impact on GBPUSD:

GBPUSD took a hefty tumble after the release of the data and reached a low so far of 1.4658. Attempts to bounce off this level look paltry so far, we will have to see if the UK Chancellor can announce anything that will boost sterling’s fortunes.

Wage data is the most important part of the labour market release at the moment, as we mention above, the BOE is unlikely to raise rates without a pick-up in pay packets. Since monetary policy divergence is a key driver of FX at the moment, the further the BOE is to raising rates, this is likely to weigh on the pound. As you can see in the chart below, the 2-year UK – US yield spread is close to its lowest levels since 2006, which is driving the pound lower. Until we see this yield spread pick up we may not see the pound stage a meaningful recovery.

The Fed meeting this evening is another major event for the pound. A hawkish Yellen could drive GBPUSD to 1.4500, a break below this level could open the way to the May 2010 low of 1.4230. Read our FOMC preview HERE. 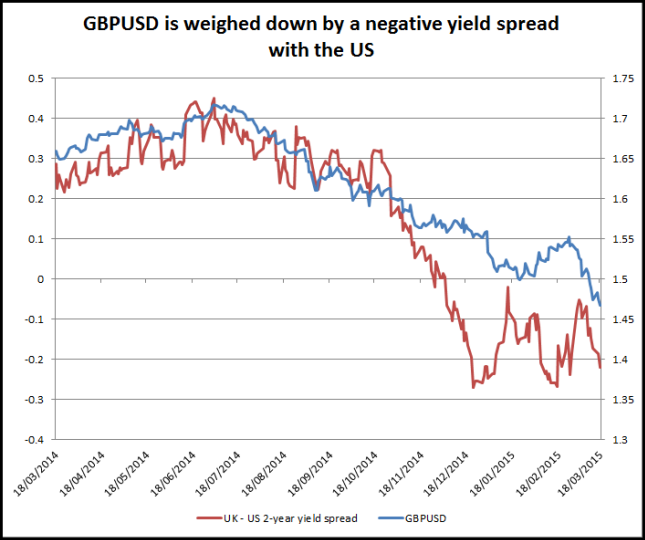