Gold drops $30: is the selling overdone?

Gold has been hammered today as it dropped by a good $30 or 2.5% from its intraday high at one stage. The vicious sell-off took place in the space of a couple of hours’ time. Evidently the bear stampede was in response to the release of some stronger US data that suggested the Fed may have been correct in their assessment of the economy after all. In yesterday’s policy statement, the central bank had acknowledged the slowdown in activity, but said the risk to the economic outlook was still “nearly balanced” as it blamed “transitory factors” behind the soft data in Q1. Some market participants had prepared for a more dovish statement than that. After all, on the same day we saw the first quarter GDP estimate showing a meagre 0.2% annualised growth which failed to meet even the most pessimistic forecast. But judging by some of today’s data releases, the Fed’s less pessimistic view of the economy can be understandable. After all, the latest jobs data showed that the number of people seeking unemployment benefits dropped last week to 362,000 from 296,000 previously – its lowest level in 15 years, no less. The Chicago PMI was also a touch stronger than expected. However although personal spending was up 0.4% month-over-month in March, it was still below the expected 0.6% reading. On top of this, personal income was flat over the month and the Fed’s favourite gauge of inflation, the core PCE Price Index, edged up only 0.1% in March when a rise of 0.2% was expected. Nevertheless, the dollar managed to bounce back a touch as investors welcomed the sharp drop in the unemployed claims. On top of the dollar rebound, global equities also managed to stage a short-lived recovery, apparently on receding concerns over Greece where the Athens stock exchange closed 3 per cent higher. All this meant therefore that there wasn’t much appetite for safe haven assets such as gold and silver. The usual end-of-the-month reshuffle by some money managers may also have had a part to play in gold’s $30 drop.

Gold’s dramatic plunge was also partially driven by technical selling. On Tuesday, the yellow precious metal had failed to break through the key resistance area between $1213 and $1220 (shaded in red). The lower end of this range is a Fibonacci retracement point while the upper is a horizontal resistance level. As the rally had stalled at this key technical juncture, some of the buy side speculators had probably moved up their stop loss orders to just below the low of Wednesday’s candle around $1200. It is likely that when gold fell through this level in the afternoon, these orders were triggered which probably helped to exacerbate the sell-off. Naturally, the price of gold has dropped to the next logical support area around $1174 to $1178 (shaded in blue). If the yellow metal goes on to break below here too then the sell-off could continue towards the 78.6% Fibonacci level at $1160 in the near-term. However following such a steep decline, we would not be surprised if traders now take some profit on their short positions. This could see the metal bounce back a little as we enter the late New York session. 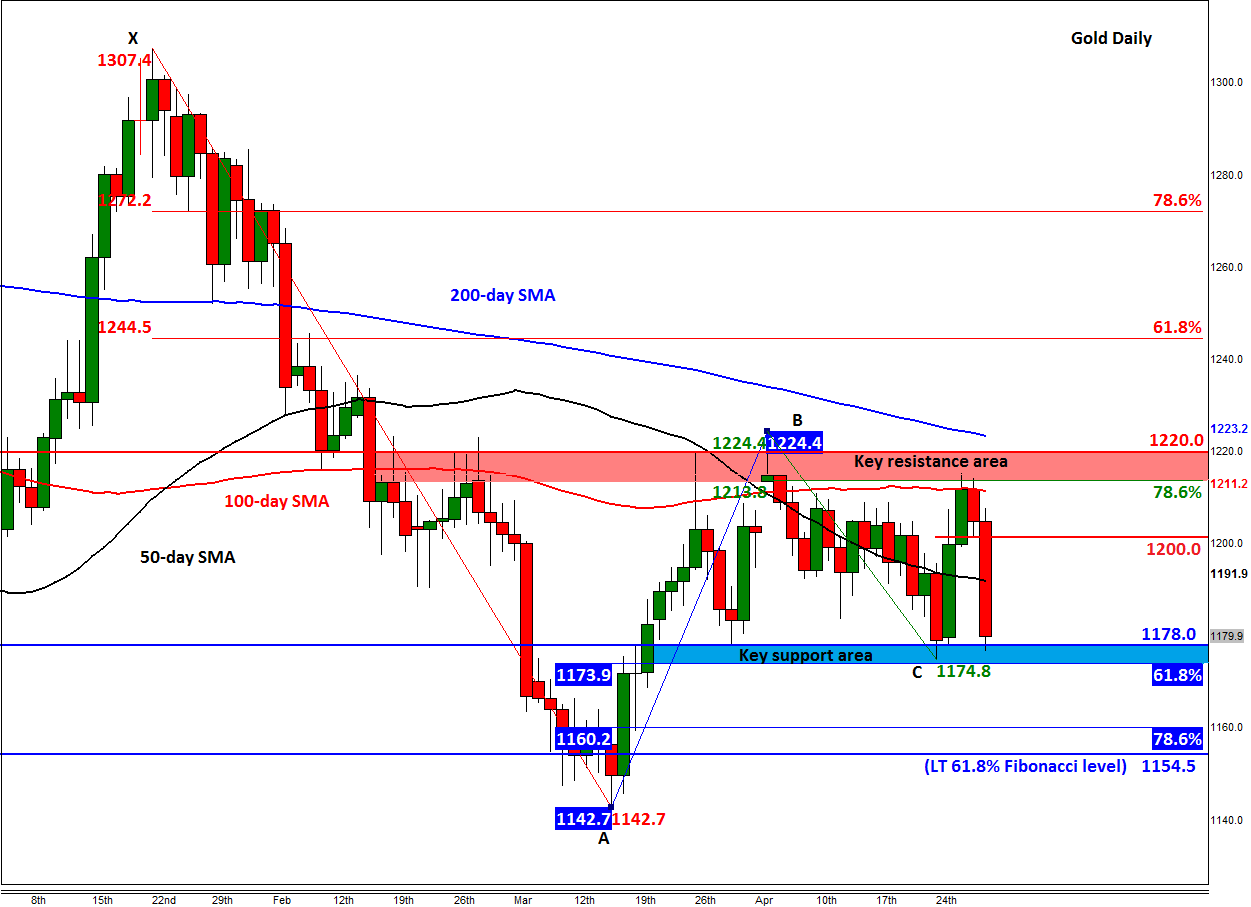