It’s been a full two weeks since we highlighted USDCAD’s big breakdown from its 1.2400-1.2800 range, but the pair has finally reached support at the key 1.20 level (see our report “USDCAD Finally Breaks Down – Could 1.20 Be Next?” for more). Not coincidentally, the pair’s initial drop coincided with the bullish breakout in oil prices (see my colleague Fawad Razaqzada’s most recent piece on oil here); for the uninitiated, it’s worth noting that Canada is the world’s sixth largest oil producer and the largest single exporter of oil to the United States. With West Texas Intermediate oil prices hitting a fresh YTD high near the 60 level, it’s no surprise that USDCAD finally meandered its way down to 1.20.

Moving forward, the technical picture for USDCAD is more nuanced. After briefly dipping below the 1.20 level yesterday, bulls have stepped in to drive USDCAD all the way back up to 1.2100 today. In the process, the pair has broken near-term bearish trend line resistance and is currently showing a 3-candle reversal pattern called a Morning Star formation. This relatively rare pattern shows a gradual shift from selling to buying pressure and is often seen at meaningful lows in the market. The 14-day RSI indicator (bottom pane) also dipped into oversold territory yesterday, suggesting that the bears may have gotten ahead of themselves. Combined with strong psychological and 38.2% Fibonacci support at 1.20, a compelling case can be made for a near-term bounce in USDCAD.

That said, USDCAD bulls may have contend with one particularly strong headwind: oil prices. The chart of WTI (not shown) is in a clear upward trend, with the commodity seeing a bullish breakout from its tight pennant formation earlier this week. While WTI could encounter some resistance at the psychologically-significant 60.00 level, there is no notable resistance above there until the early December low at 63.00 next.

Therefore, short-term traders may want to wait to see if oil breaks below its bullish trend line before committing too strongly. If, on the other hand, we see USDCAD break 1.20 support and WTI clear 60.00, USDCAD could fall toward its 200-day MA around 1.1700 next.

* A Morning Star candle formation is relatively rare candlestick formation created by a long bearish candle, followed a small-bodied candle near the low of the first candle, and completed by a long-bodied bullish candle. It represents a transition from selling to buying pressure and foreshadows more strength to come. 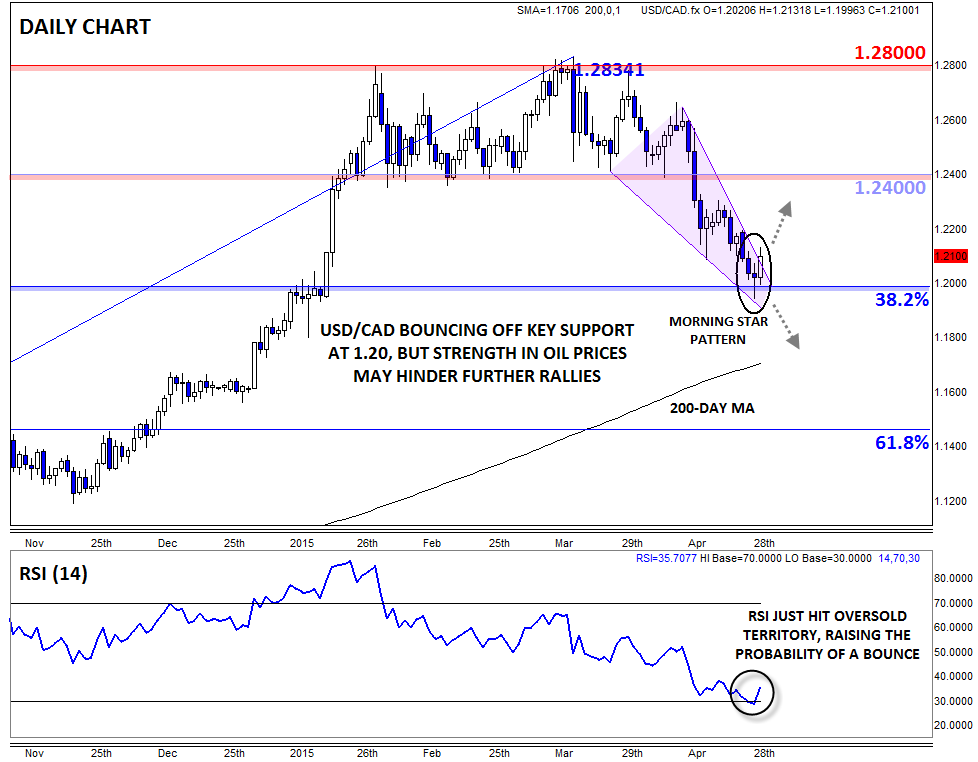