The EUR/USD has started the month of May on the back foot after a surprisingly strong performance in April, a month in which the world’s heaviest traded currency pair gained about 470 pips (or 4.4%) on the back of some disappointing US economic data and generally stronger euro zone numbers. Since reaching a high of almost 1.1290 in the first day of the month on Friday, it has since dropped to a low so far of 1.1065. In other words, it has shed more than 200 pips in the space of three trading days, albeit it is off its lows as we go to press. As well as rebounding dollar this month, the EUR/USD has been weighed down by the on-going Greek saga. This morning the leading shares index in Athens was down 3% with yields on government bonds being higher across the board. The risk off tone in Greece appears to be in response to a report in the FT yesterday that said that the International Monetary Fund has warned Greece that it is so far off course on its $172bn bailout programme that it could potentially lose IMF support. That is, the IMF said, unless European lenders write off significant amounts of its sovereign debt. If the story gains traction then it could put further pressure on the euro and potentially European stocks, too.  The latest news on Greece is that Germany’s finance minister Schäuble says he is ‘sceptical’ that a deal will be reached by May 11.

The EUR/USD could find clearer direction from this week’s key data releases, starting with the US non-manufacturing PMI this afternoon. As well as the headline PMI figure, the market will be watching the employment sub index as this will provide a good clue for the April jobs report due out on Friday.  The ADP private sector jobs report will come out on Wednesday, followed by the usual weekly unemployment claims on Thursday. Last week saw the latest claims figure come in at a 15-year low of 262,000. If we get a similar figure this time around then expectations may rise that the jobs growth rebounded strongly last month following the unexpected slowdown in March. Ultimately however it will be the nonfarm payrolls data itself that may provide the main source of support, or otherwise, for the dollar – and in turn, the EUR/USD – this week.

As mentioned, the EUR/USD has retreated quite sharply after rallying into a key resistance zone at the start of this month, around 1.1285/95. As can been on the chart, this area was formerly support which also marks the convergence of the 100-day moving average with the shallow 23.6% Fibonacci retracement level of the downswing from May 2014 peak. Here, traders who had bought the break above the prior resistance around 1.1050 probably took some profit. Now that price is falling back towards 1.1050, it will be interesting to watch what the EUR/USD may do next. In our view, a short-term bounce is likely around 1.1050 as some traders who missed the initial opportunity to go long, especially those who expect to see further weakening in US economic data, may wish to join the rally here. The potential bounce could turn out to be a significant bullish development if US data does turn out to be disappointing this week, or if Greece reaches a deal with its creditors. But as the long-term fundamental outlook for the EUR/USD remains bearish due to the divergence in monetary policy stances of the ECB and Fed, among other factors, most traders are probably waiting for a confirmation that the long-term downward trend has resumed. Indeed, if the EUR/USD goes on to break decisively below the 1.1050 support level then we may see an acceleration in the downward move, as the exiting longs also exit their trades. In this case, price may then make a move towards the retracement levels at 1.0995 (38.2%), 1.10905 (50%) and 1.0815 (61.8%) before deciding on its next move. 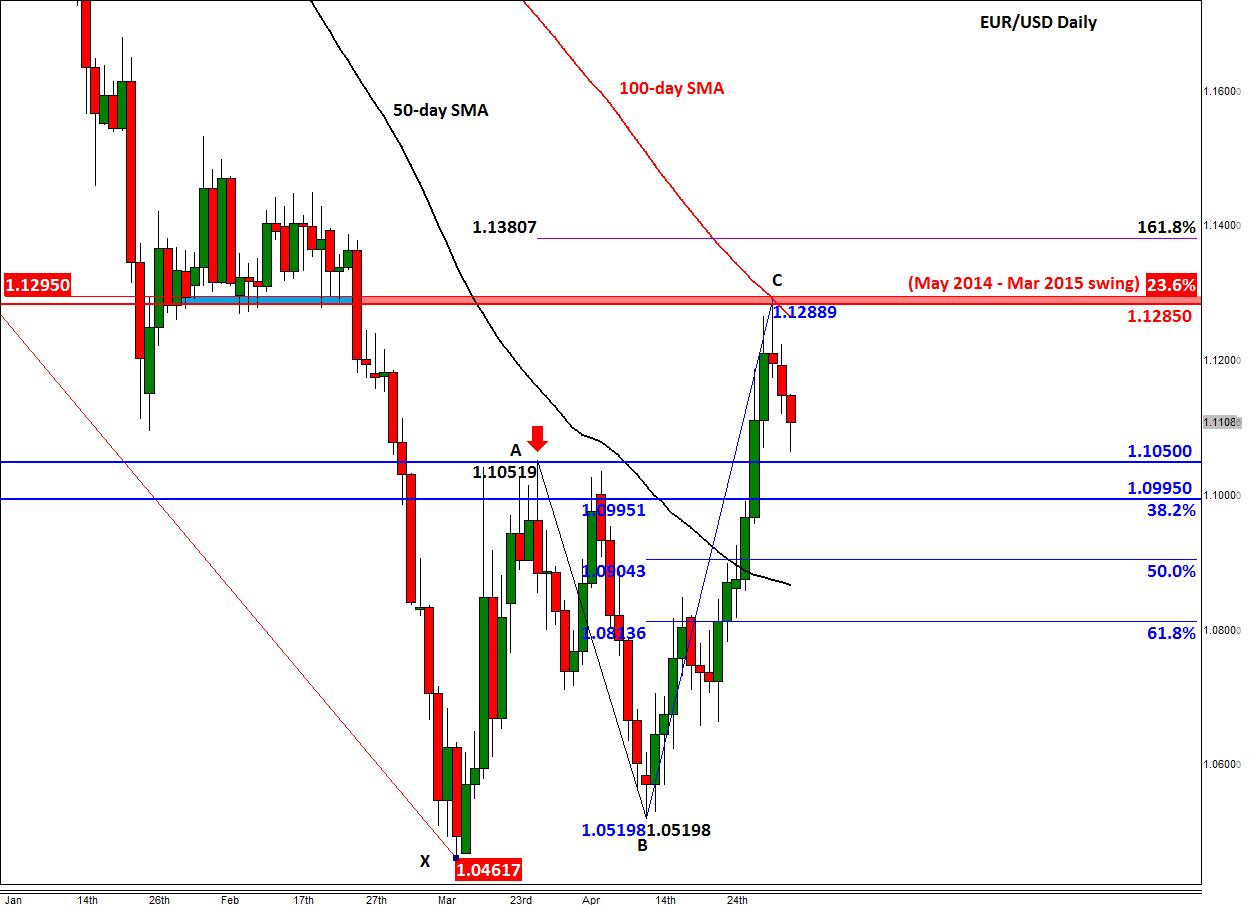