King Dollar Suffers a Setback in the Game of Thrones

“When you play the game of the thrones, you win or you die”

HBO’s epic “Game of Thrones” series, based on the books by George R. R. Martin, has captured the world’s imagination with its massive scale and brutal violence. In some ways, the HBO series’ constant competition and unexpected twists of fortune mirror the forex market, though until last month, there was just one unchallenged “king” of the forex market: The US Dollar.

After rising for an incredible nine straight months, the US Dollar Index finally took a break in April, pulling back 4% on concerns that the US economy was stalling. Last week, we highlighted that Citigroup’s US Economic Surprise Index dropped below -0.75 to the second lowest level since inception in 2000 and that “the dollar drop may be just getting started…[t]o the downside, the 100-day MA around 95.00 may be the next support level to watch” (see “Why is the Dollar Diving Ahead of the Fed?” for more). This key 95.00 level was hit faster than anyone, ourselves included, expected and as we head into a new trading month, the question on the tip of every traders tongue is, “Have we seen the end of the dollar’s massive rally?”

This week’s US economic reports will go a long way toward answering that question. Later this morning, the market will see one of the best measures of broad economic activity, the ISM Non-Manufacturing PMI survey. Expectations are centered around a roughly steady headline reading of 56.2 after last month’s 56.5 reading, but dollar bulls will be looking for the measure to accelerate after a supposedly weather-constrained first quarter. Beyond the headline reading, the employment subcomponent of the report will also be closely scrutinized, as it tends to be one of the best leading indicators for Friday’s Non-Farm Payrolls report. Traders will also keep an eye on Wednesday’s ADP Employment report and speech by Fed Chair Yellen, as well as Thursday’s Initial Unemployment Claims report.

Turning our attention to the dollar index, there is certainly a technical case to be made for a bounce. The trade-weighted index is finding some support at the convergence of the aforementioned 100-day MA and previous support in the 94.00-95.00 zone thus far this week. The lagging MACD indicator continues to trend lower beneath its signal line and the “0” level, signaling bearish momentum, but the RSI dipped into oversold territory late last week, suggesting that we may have hit a near-term bearish extreme.

Unless we see absolutely abysmal or stellar US economic data this week, the dollar index appears set for a period of consolidation between 100-day MA support in the 94.50 area and resistance at the 50-day MA near 97.50. Traders’ blind worship of King Dollar has likely been put on hold, but that doesn’t mean that the greenback has to suffer a proverbial “death”; instead, the world’s reserve currency may just bide its time and wait for its next opportunity to ascend to the throne. 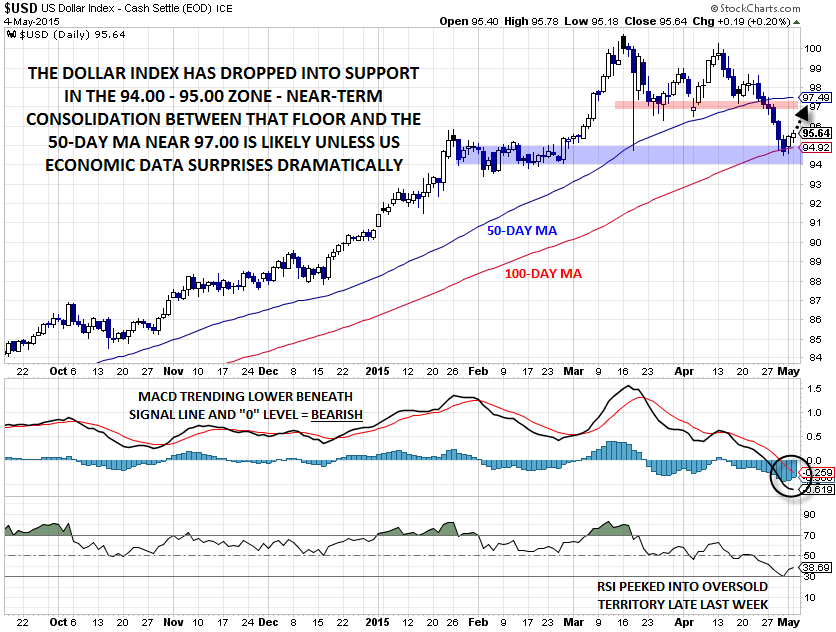