EURGBP: The Lesser of Two Evils?

Did you hear that Greece’s financial woes are in the news again?

If there was an award for “Least Surprising Economic Development of the Last Half Decade,” the above question would be the runaway winner. As my colleague Fawad Razaqzada noted earlier this morning, “the International Monetary Fund has warned Greece that it is so far off course on its $172bn bailout program that it could potentially lose IMF support.”

This leaves Greece caught between a rock and a hard place: Greece needs to secure its next tranche of bailout funds, but the members of the bailout “troika” (the ECB, European Commission, and IMF) all have different priorities for Greek reforms. Earlier today, a Greek government official noted that the IMF won’t negotiate on pension and labor market reforms, but is open to tweaking Greece’s required primary surplus; the European Commission refuses to discuss the primary surplus but has left the door open to changing pension and labor market reforms; meanwhile, the IMF is arguing for a haircut on Greece’s debt, but the European Commission has staked out a position in staunch opposition to haircuts. Confused yet? So is Greece.

As always, traders still seem to believe that some sort of “kick the can down the road” deal will eventually be worked out: After all, Greek 10-year bond yields edged up by about 50bps to 11.10% today, but are still trading over 2% below last month’s peak. While the two parties may or may not reach some sort of agreement ahead of Greece’s €780M debt payment next week, the true Greek Gorilla in the Room is the €11 billion in required payments over the course of June and July. Regardless of what happens in the near term, the uncertainty surrounding the scope and details of any bailout deal will remain major headwinds for euro bulls.

When it comes to EURGBP, traders must pick the lesser of two evils. The euro and pound each feature unusually elevated uncertainty at the present moment (from Greece and the UK election, respectively), but over the last week, traders have felt more comfortable with the euro. As of writing, EURGBP is up over 200 pips in the last week to test key converging resistance at .7400, where the 38.2% Fibonacci retracement and falling 100-day MA converge. The secondary indicators are relatively bullish, with the MACD trending higher above its signal line and the “0” level and the RSI trending higher, but not yet overbought.

As it stands, bullish traders will remain cautious until the .7400 barrier is conclusively broken, but if that level gives way, a continuation toward the 50% or 61.8% Fibonacci retracements at .7510 or .7625 is in play. 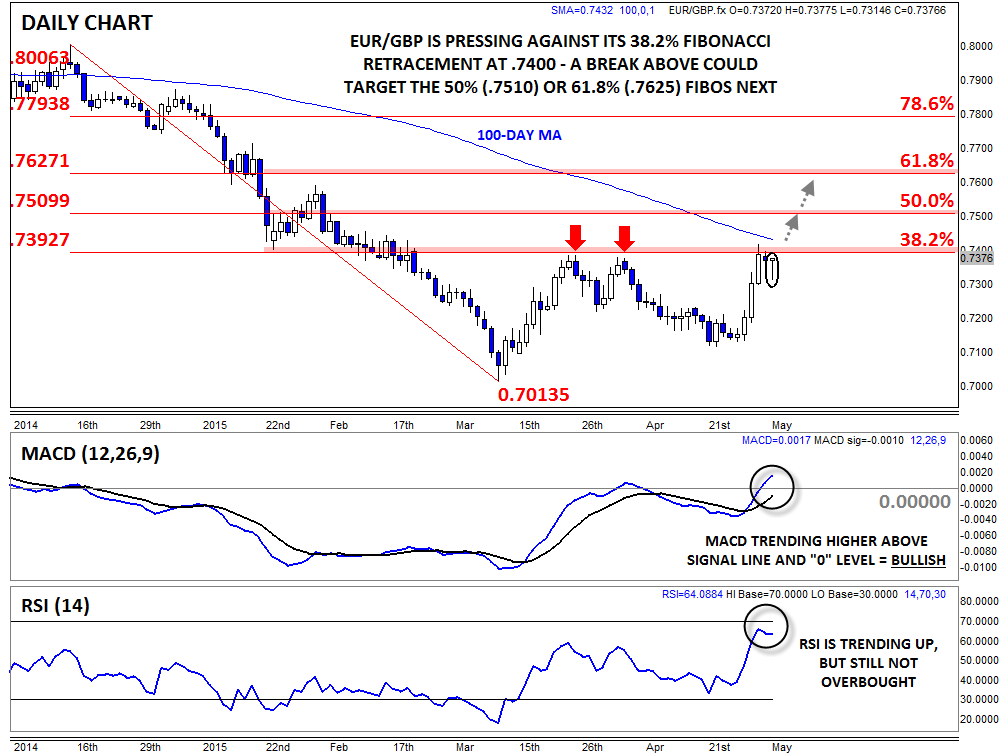