The second half of the North American trading session didn’t provide any new wrinkles to the already determined path of most trading instruments from the morning session.  The USD continued to lose ground, US equity markets crept ever lower, and commodities enjoyed a little strength.  As we head in to the Asian trading session though, there will be some major market moving events that could upend some of these moves, starting with New Zealand’s Employment reports.

Typically, whenever we see employment reports being released in a particular region, we look toward the total number of jobs gained or lost instead of the unemployment rate.  That’s why Non-Farm Payroll is more scrutinized, Canadian Net Change in Employment is combed over more fastidiously, and New Zealand’s Employment Change will be more dissected than any of their individual unemployment rates.  However, another Kiwi employment-related release this evening may be even more important than the Employment Change, and that is the Labor Cost Index (LCI).  The LCI measures how much people are getting paid, or more specifically, how much their income is increasing.

Considering the lack of inflation that has been a scourge in economic circles over the past year or so, a lackluster increase in wages would confirm that the low inflation environment is creating a type of deflationary mindset; essentially individuals don’t see a need to ask for, and businesses don’t see the need to grant, raises because stuff isn’t costing more.  That is a mindset that central bankers loathe because history (and textbooks) have ingrained in them that a 1%-3% inflation rate is healthy and prosperous for a nation or region.  If they see inflation rates falling below those levels, it sounds off the alarms that interest rates need to be cut, or in extreme examples, Quantitative Easing needs to be implemented.  Though you could argue that QE isn’t so extreme anymore since we’ve seen it from the US, Japan, and Europe within the last year.

According to most guesstimates, New Zealand’s employment situation in Q1 2015 could turn out to be pretty good this evening.  Unemployment is expected to decline to 5.5% from 5.7%, 0.8% more people are expected to be employed over the last quarter, and the LCI is anticipated to increase 0.4%.  If all of these bars can be cleared, then all may end up turning roses for the Reserve Bank of New Zealand and their future policy, but if the lack of inflation monster rears its ugly head again, the RBNZ may be ready to act.  As they said in their monetary policy statement last week: “It would be appropriate to lower the OCR if demand weakens, and wage and price-setting outcomes settle at levels lower than is consistent with the inflation target.”

If we go with the assumption that everything needs to be great this evening for New Zealand in order for optimism to reign, then that may be a particularly daunting task.  In addition, the Global Dairy Trade’s Price Index declined for a fourth straight auction, this time by 3.5%; a development that certainly doesn’t help inflation.  One currency that may find the most strength against the NZD if employment goes awry could be the CAD which may get an extra boost from increasing oil prices.  The NZD/CAD is also bumping up against a declining trend line that has been holding strong for the past couple weeks.  Considering both the fundamental and technical backdrops of this currency pair, a move lower just may be in store. 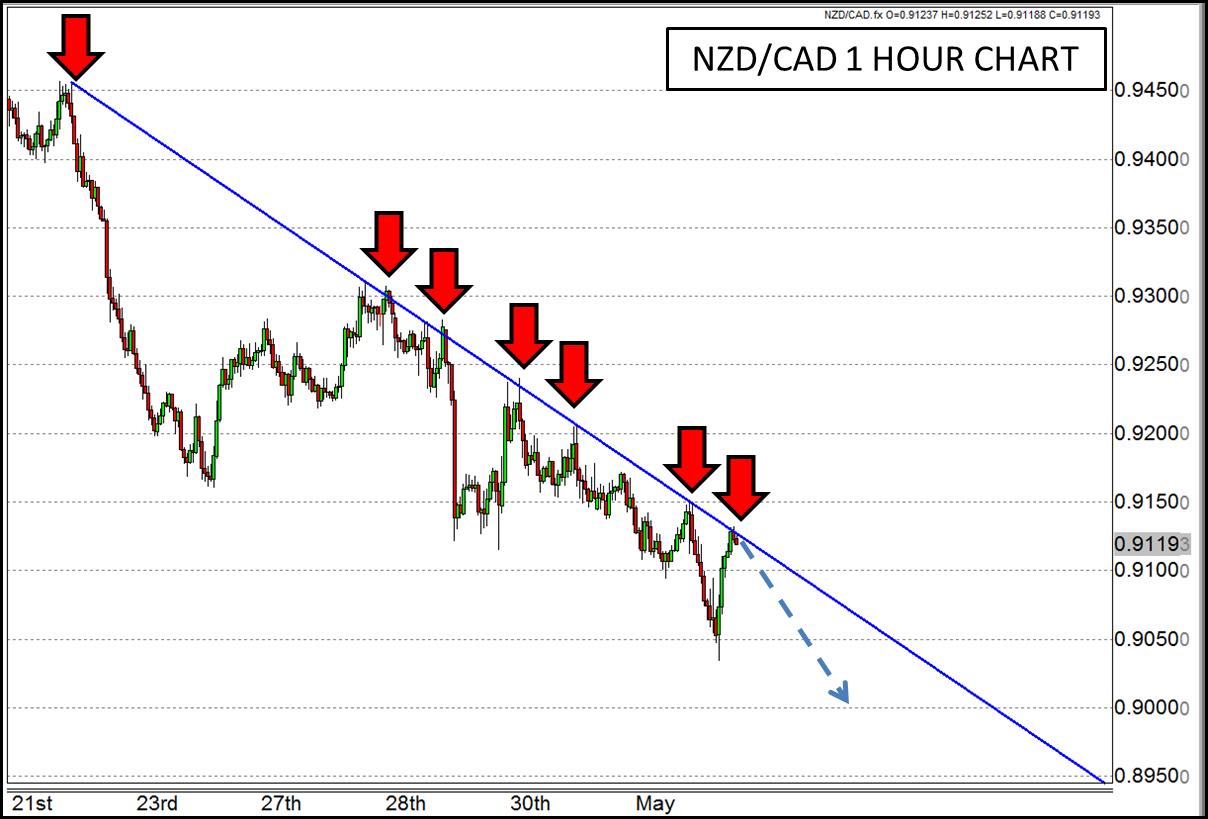