CAC: stock market sentiment remains cagy ahead of US data

The European stock markets have recovered somewhat after Tuesday’s sharp sell-off. Sentiment has improved a little on the back of mostly better-than-expected European data but remains cautious due to the on-going uncertainty over Greece, the UK election, and ahead of key US macroeconomic pointers this week. The latest services PMI figures out of Spain and Italy topped expectations this morning while the final version of the euro zone PMI was also revised higher. However the German services sector PMI was revised down slightly. Meanwhile retail sales in the euro zone fell in March by 0.8% which was worse than expected. In the UK, the services sector PMI hit an eight-month high of 59.5 when it was expected to have fallen to 58.6 from 58.9 previously. All in all, it was a decent day for the European data and correspondingly the stock markets have risen slightly. Now the attention will turn to the US where the APD private sector jobs report will be published at 13:15 BST. The ADP will provide one of the biggest clues for the official jobs numbers on Friday, so has the potential to move the markets quite dramatically. The report is expected to show that the private sector, excluding the farming industry, added some 200,000 jobs into the world’s largest economy last month. If confirmed, or better, this should be good news for equities across the board as the US is one of the biggest export destinations for many countries.

Following the sell-off on Tuesday, some of the major European indices have now arrived at key technical junctures. Take the CAC as an example. Yesterday saw the French index initially climbed above its 50-day moving average but then sold off sharply once it hit 5130. This was a broken support level, which unsurprisingly turned into resistance upon re-test. Consequently, the CAC has dropped all the way to the next logical support area around 4930/40. As can be seen from the chart, this is where a number of technical factors converge: previous support, a bullish trend line and a Fibonacci retracement level (23.6% of the AD upswing). Clearly, traders have noticed the importance of this area today which is why the index has bounced here. But whether or not this bounce will turn into a significant bullish development remains to be seen. We will certainly be extremely cautious until it surpasses the old support-turned-resistance level of 5130 now. Indeed, if it breaks below the aforementioned 4930/40 support area then there would be nothing significant on the way down until the 38.2% Fibonacci retracement at 4710/5 or the horizontal support at 4600. In other words, the potential for a sharp correction is there should the 4930/40 support level breaks down. But until and unless that happens, we remain neutral for as long as the index holds between the 4930/40 support and resistance at 5130. A potential break above 5130 would thus be very bullish in our view. 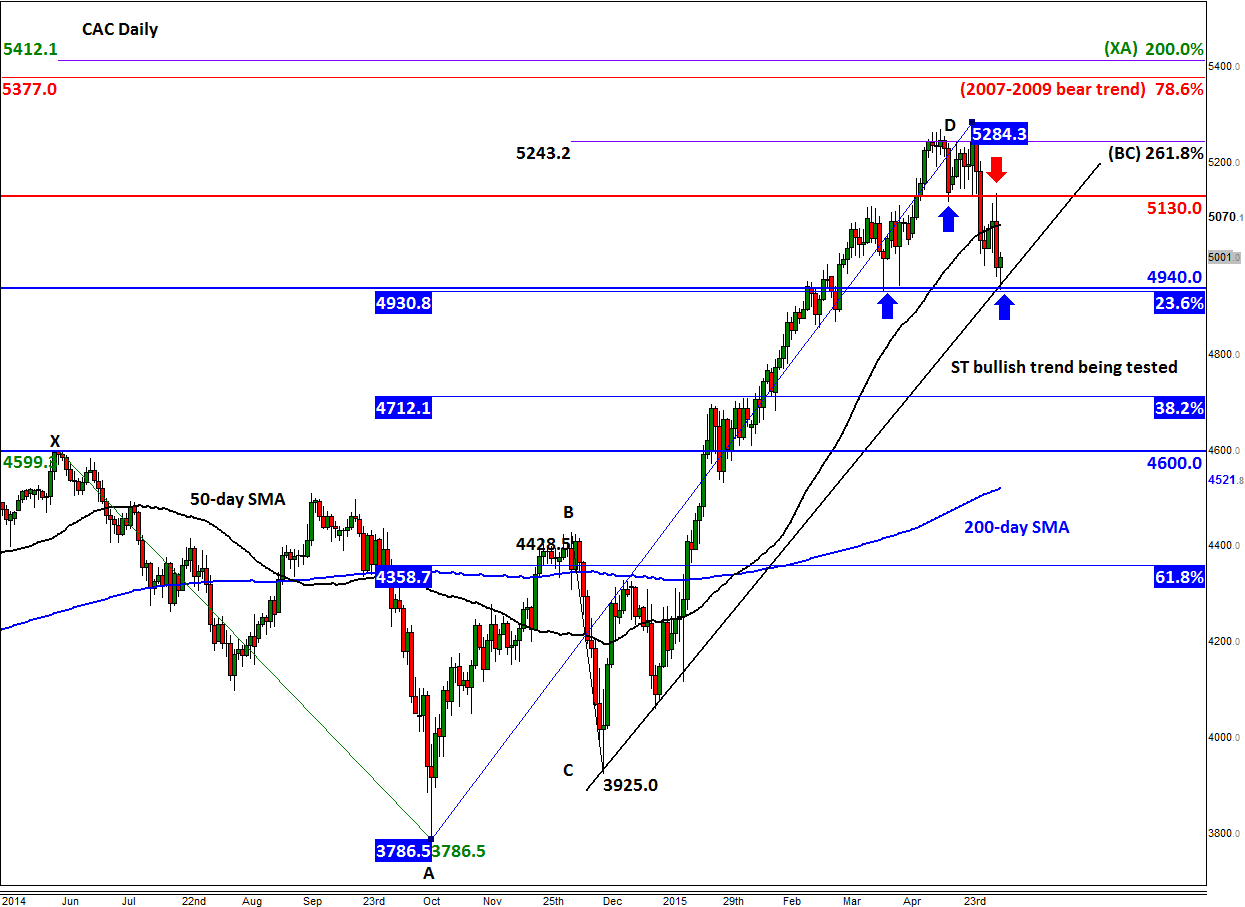