US dollar bulls took one on the chin this morning with the release of the April ADP Non-Farm employment report. While not as widely-watched as the Friday’s marquee NFP report from the BLS, ADP’s report can still provide an accurate view of the health of the labor market, and based on this morning’s release, it looks like the labor market may be coming down with a bug.

The report showed just 169k net new jobs created in April, below the 199k reading expected by traders and economists; this marked the fourth consecutive miss in the report. Adding insult to injury, the last month’s reading was also revised down by 14k to just 175k. Dollar bulls, as well as the Federal Reserve, are anxiously watching for a spring thaw in economic data and today’s disappointing data further raises the stakes for Friday’s NFP report.

Turning our attention to the chart of USDCHF, the pair is edging below key support at .9240 (the 50% Fibonacci retracement of the post-SNB rally) as of writing. Yesterday, rates carved out a Bearish Engulfing Candle*, signaling a clear shift to selling pressure that has now gained strength from the disappointing ADP report and break below support. Meanwhile, the MACD is trending lower beneath its signal line and the “0” level, showing clearly bearish momentum, though with the RSI indicator is approaching oversold levels for the first time since the SNB debacle, the bearish trade may be getting a bit crowded in the short term.

Assuming USDCHF manages to close below the .9240 level, a continuation lower will be favored heading into the weekend. If we see a weak NFP report confirm today’s ADP data, USDCHF bears could seek to push the pair down to the next level of Fibonacci retracement support at .9030, which conveniently comes in near the psychologically-significant .9000 level. At this point, only a break back above previous-support-turned-resistance around .9240-50 would put the bearish bias on hold. 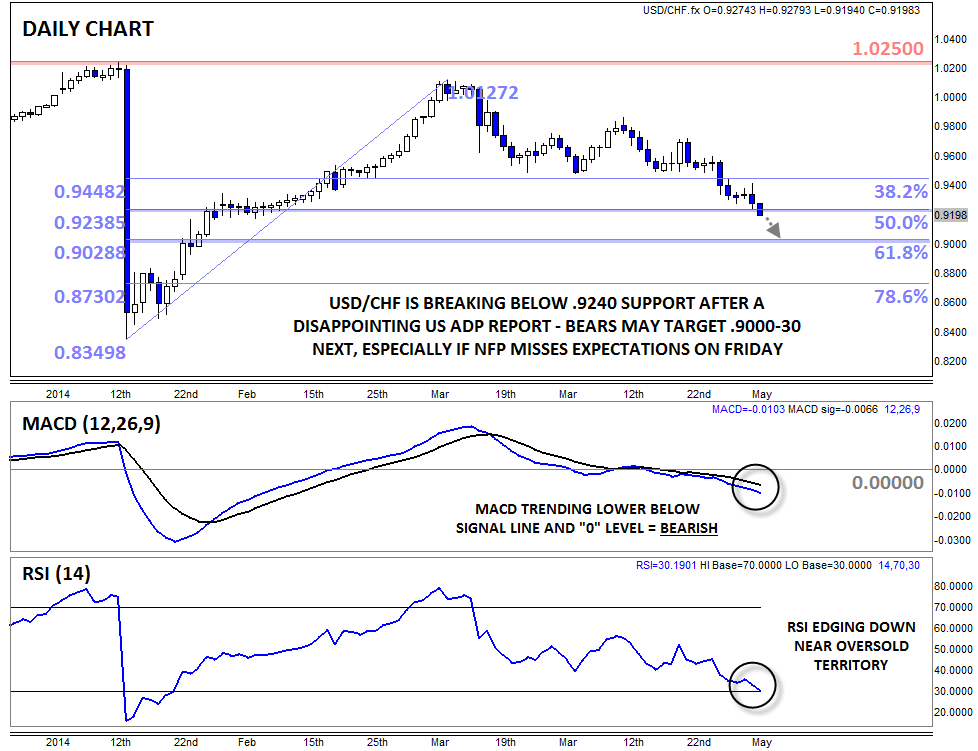