DJIA: stuck between a rock and a hard place

The US stock markets are a touch lower today, extending their declines from the day before. Overall, there is no strong sense of conviction from traders to commit in one or the other direction at this stage and the major indices are correspondingly trading in ranges. As things stand though, sentiment does appear to be moderately bearish. This is understandable following the recent soft patch in US data and raised concerns about Greece, among other things. The April APD employment report, which is among the key leading indicators for the official nonfarm payrolls data, was expected to show that the private sector, excluding the farming industry, had added some 200,000 jobs into the world’s largest economy. However as it turned out, this wasn’t the case as only 169,000 jobs were created last month. Adding to the negative sentiment was comments from the Fed Chair Janet Yellen, who said that equity valuations are “quite high” and that there are “potential dangers there.” Nevertheless, the losses have thus far been limited, helped in part by the release of mostly better-than-expected European data, and caution ahead of the US nonfarm payrolls report on Friday. The latest services PMI figures out of Spain and Italy topped expectations this morning while the final version of the euro zone PMI was also revised higher. However the German services sector PMI was revised down slightly. Meanwhile retail sales in the euro zone fell in March by 0.8% which was worse than expected. In the UK, the services sector PMI hit an eight-month high of 59.5 when it was expected to have fallen to 58.6 from 58.9 previously.

But despite the recent weakness, the long-term outlook for the global stock markets remains bullish due, above all, to the record low interest rates across many western central banks and a slowly improving Eurozone economy. Thus once the dust settles down, we could see a sharp rally across the equity markets. In the short-term, however, there are increased risks for a sizeable pullback.

Indeed, like most other global indices, the technical picture on the Dow is looking shaky. That said however, the index has not created a confirmation signal yet that would suggest a sharp correction is on the way; thus at this stage the bears will need to proceed with extra caution. As can be seen on the chart, the index continues to find support around its 100-day moving average, even if on occasions it spikes below it. But the corresponding rallies have also been short-lived with the area around 18135 providing stiff resistance. Eventually the index will break out of this range in one or the other direction and this could pave the way for a sharp move.  The bears are probably waiting for a closing break below the 100-day average or support around 17765 before showing their presence, while some of the potential buyers are probably waiting for a closing break above the 18135 resistance area. If the bears win this battle then we wouldn’t be surprised if the Dow were to make a move towards at least the next horizontal support at 17600. Indeed, it may even go for a test of the 200-day moving average, at 17485, before deciding on its next move. But if the bulls win the battle then we may well be talking about fresh record highs very soon. At the stage however the bears appear to have the upper hand. 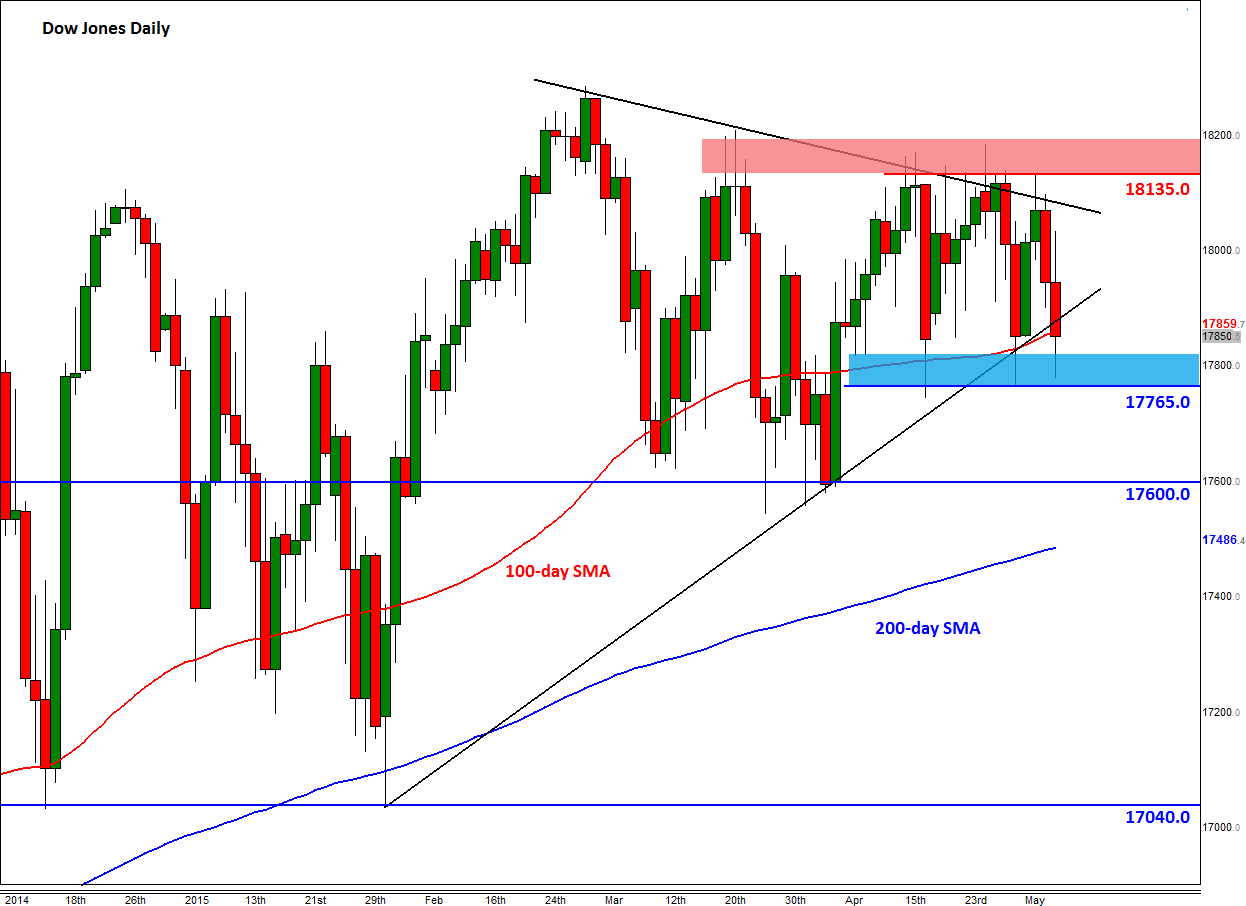