Crude oil is lower today, extending its decline from yesterday afternoon when the EIA published its latest supply data. Although crude stocks fell by a good 3.9 million barrels last week, which was meanwhile the first decline since early January, oil prices were unable to advance further than they already had. As well as for technical reasons (see below), speculators were happy to take advantage of the news to book profit as they had already expanded their bullish positions significantly in recent times. They had actually started to reduce their bullish bets the week before as highlighted by positioning data from the CFTC (published on Friday), which showed net long positions had dropped for the first time in five weeks, by a good 3.5%. Oil traders are probably not convinced yet that last week’s drop in crude stockpiles would mark the start of a major destocking cycle, for after all the decline was mainly due to a sharp fall in imports. But the refinery utilization rate has risen above the normal level for this time of the year. This suggests that demand for oil is high and points to lower stockpile levels in the coming weeks. Indeed, the global demand for oil does appear to be stronger than had been expected, which is probably why Saudi Arabia recently hiked its prices to customers in Europe and North America. So, oil’s recent rally is not totally unjustified but it probably got a little ahead of it itself and is now pausing for breath. Also weighing on oil prices is the rebounding US dollar which has found some support today from a smaller-than-expected increase in claims for unemployment benefits. Claims rose to 265,000 last week from 262,000 previously (which was the lowest level in 15 years), easily beating expectations of a rise to 277,000. The data bodes well for the official jobs report tomorrow which is now the main focus for the market this week.

From a purely technical point of view, the crude oil rally appears to be on the verge of a collapse – at least in the near term anyway. Following the publication of the weekly inventories report yesterday, oil initially rallied before heading south. The resulting price action created a bearish-looking candlestick pattern on the daily chart, namely an inverted hammer (see the inset on the 4-hour chart, below). This formation is typically found at the top of upward trending markets and usually, but not always, signals major turning points. Given the technical importance of this candlestick formation, bullish oil speculators may rush for the exits in order to protect profits they have accumulated thus far in the year. In addition to the candlestick pattern, the chart shows that the rally has stalled around the 161.8% Fibonacci extension level of the last notable downswing we saw between February and March, around $61.70. In other words, the crude oil rally had already reached an exhaustion area. Going forward it will be worth watching what oil will do around $59.85, a level which corresponds with a bullish trend line. If it closes below this level then it would more or less confirm the end of the short-term upward trend. As a result, the sellers may come back in force and drive oil prices back towards the prior broken resistance levels such as $58.35, $56.00 and maybe even the key support at $54.00. However if the bulls show their presence here and defend the abovementioned $59.85 level on a closing basis then one would have to assume that the short-term upward trend is still intact. 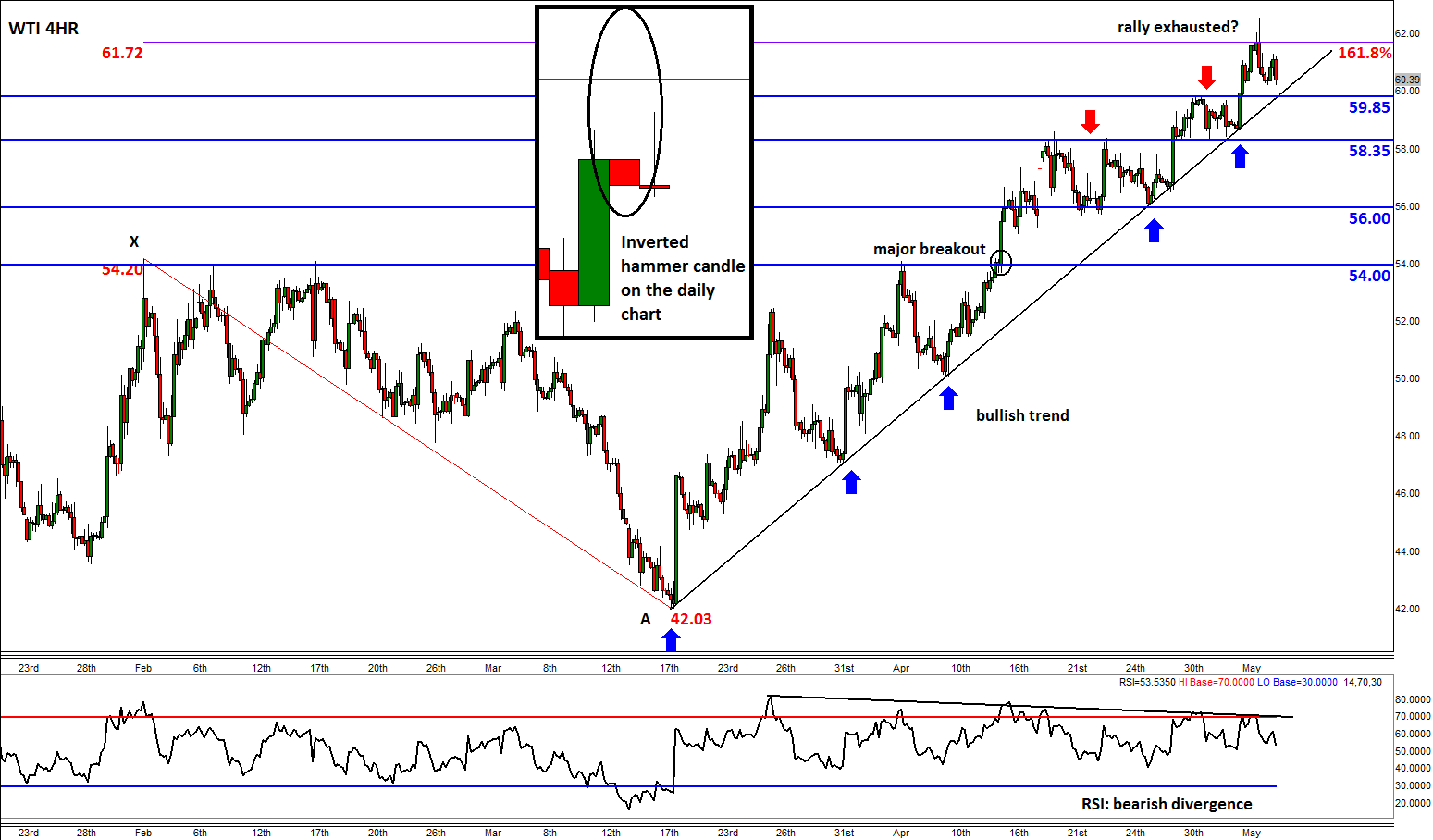