In our stock market report on Thursday we highlighted among other things the fact that the FTSE was under increased pressure because this general election was among the most unpredictable ones in history. The biggest risk for the FTSE and other UK assets in our view was if we got a hung parliament. We argued that even if this potential outcome had no economic impact, the uncertainty that came with it may well undermine the appetite for risk. Therefore as soon as it became apparent that this was not going to be the case as had been predicted, the UK markets staged a sharp relief rally. The FTSE future spiked overnight and by early trading this morning it was up a cool 150 points as the Conservatives majority victory was priced in, an outcome which has removed the threat of tighter restrictions that were proposed by the Labour party on several sectors of the economy.  These included the energy sector; the housing market, with shares in homebuilders coming under pressure in recent times after Labour said it would introduce rent controls; gambling companies were undermined by the same party’s promise to give local councils powers to ban fixed-odds betting terminals and UK listed banks were held back on concerns about Labour’s plans on the excesses of the City. Shares in these sectors were thus expressing a big sigh of relief on Friday morning. For more on the UK election, read my colleague Kathleen Brook’s article HERE. Preventing an even bigger rally today was the disappointing Chinese trade figures that have largely been overshadowed by the UK election results. Exports in the world’s second largest economy fell by 6.4% year-over-year in April while imports contracted by 16.7%. Both figures were significantly worse than expected, which does not bode well for commodities with China being a major importer of iron ore and crude oil, among other basic materials.  The news could weigh on shares of some mining and energy firms once the UK election euphoria fades.

Indeed, once the election jubilations are over, the domestic focus will turn to the challenges that lie ahead, including the possibility of Britain leaving the EU and Scottish Independence. These concerns may hold UK assets back over the longer term.  Meanwhile in the more immediate term, the focus this afternoon will be on the key US monthly jobs report which is due for release at 13:30 BST. My colleagues Matt Weller and Neal Gilbert have already produced their usual NFP preview, so if interested in their views please follow THIS link. In a nutshell, the market is expecting a sharp rebound in the number of jobs created last month after the headline figure for March took everyone by surprise as it came in at 126,000. This time, the consensus is for about 228,000 jobs gained although given the mixed bag labour market pointers we have already seen this month, the world’s largest economy would have done well to have added more than 200,000 jobs. Anything above 200,000 should be good news for the dollar, especially if there is a sharp upward revision to the prior number. A stronger dollar may weigh on the EUR/USD and maybe even GBP/USD. As a result, it may boost the appetite for stocks of certain European exporting companies.

The FTSE actually managed to hold its own above the trend line we identified on Thursday, and the bulls also defended the key 6900 level on a closing basis. The resulting rally has seen the index jump all the way to 7055, a level which has offered a bit of resistance for now. As well as the high from earlier in the week, this level corresponds with the 78.6% Fibonacci retracement of the downswing from the record high achieved last month. If broken, the next potential resistance areas are the Fibonacci extension levels at 7130, 7215, 7325 and 7420, derived from the XA and BC swings as shown on the chart. Our near-term view on the FTSE will remain bullish for as long as the trend line holds as support. If broken then we wouldn’t rule out the possibility for a sharp drop towards the 200-day moving average at 6720 or the horizontal support further lower at 6670. 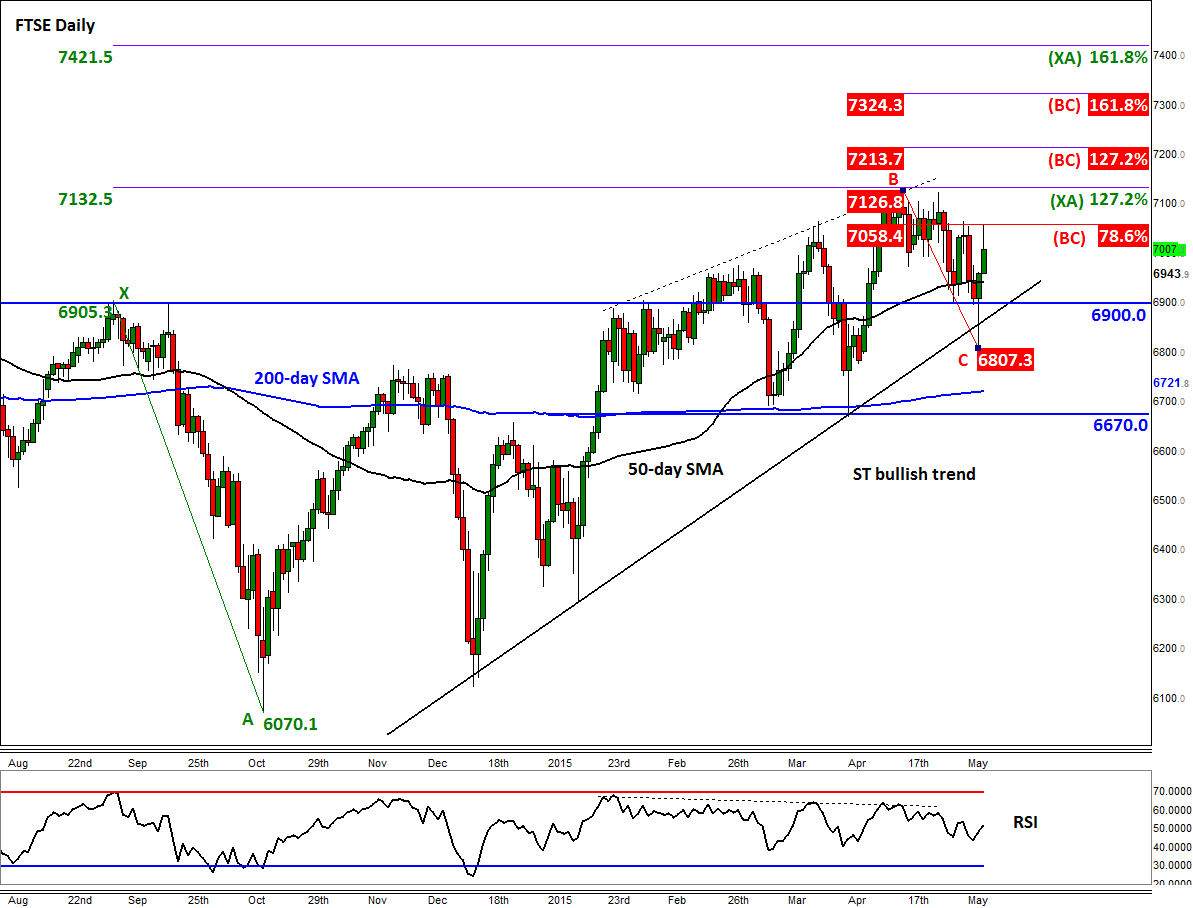