UK election: what now for the pound as UK referendum fears start to rise?

The shock election victory for the UK’s Conservative Party triggered a rally in UK asset classes on Friday; however, in the aftermath of the election questions are being asked about the future of the UK’s EU membership now that the Conservatives are firmly back in power.

Prime Minister David Cameron mentioned his pledge to hold an EU referendum before the Conservative majority had been confirmed and warnings from elsewhere about a potential referendum have started to come thick and fast. The UK’s banking body urged caution and stressed the need to ensure that the financial sector is protected if the UK leaves the EU. Credit rating agency Moody’s released a statement earlier and said that a referendum could have implications for the UK’s credit rating. Thus, just because the Conservatives have a majority in the UK and it is considered a “business-friendly” party does not mean that financial markets will stay sanguine with Cameron for the long-term.

But are markets worrying for no reason? We think that they might be for a couple of reasons:

So what about the pound? After a shock election result, the market may need to rethink its view on the medium-term outlook for the pound. Below are our thoughts:

It is also worth noting the reaction in bond yields. UK 10-year Gilt yields have actually fallen in the aftermath of the election result, in line with global yields which have also fallen back after some large increases in yields earlier this week. However, the decline in Gilt yields/ rise in Gilt prices could also be the market breathing a sigh of relief that political uncertainty in the UK has been eradicated for another 5 years.

Overall, in the short term the election result is positive for sterling, but in the longer term it could struggle to make gains towards 1.60 if the spectre of an EU referendum starts to loom large. 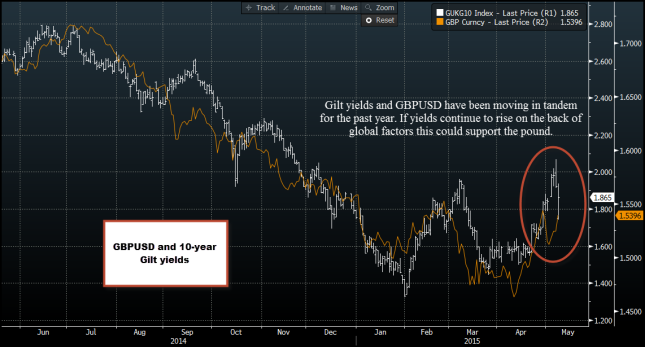 Source: FOREX.com and Bloomberg, these prices do not reflect prices offered by FOREX.com