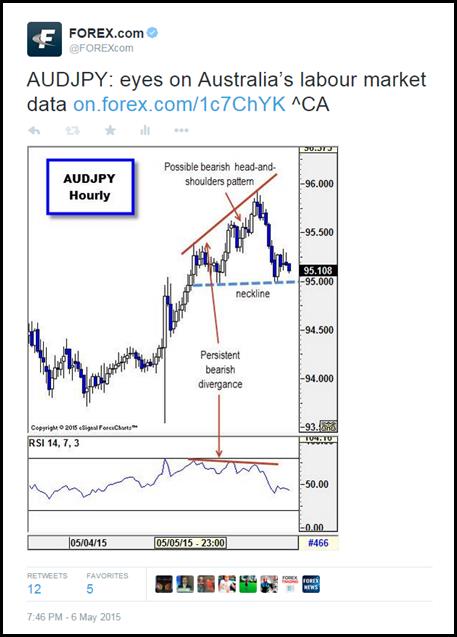 Our countdown begins with a link to an article written by Chris Tedder that warned of the upcoming labor data from Australia.  The neckline that Chris illustrated did eventually get broken as the AUD/JPY fell down to 94.30 before bouncing to end the week. 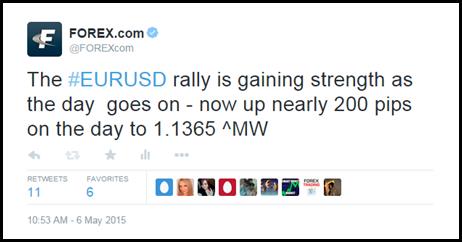 Making his first (but not last) appearance on our countdown, Matt Weller offered some commentary on the strength of the EUR, or weakness in the USD, mid week.  The EUR/USD made even more hay after Matt’s tweet as it nearly touched 1.14 before all was said and done.  However, the lead up to Non-Farm Payrolls and next week’s Eurogroup meetings perhaps calmed the bulls to take a little profit ahead of the weekend as the pair retreated to 1.12. 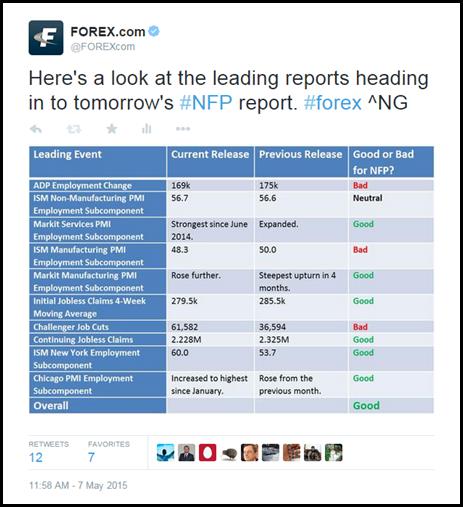 Proving that NFP gets a lot of attention, Neal Gilbert gave us his table of employment releases that helped him predict a 205k result for NFP, not far off the 223k actual figure.  While it was encouraging to see NFP get back to the 200k territory, the lack of Average Hourly Earnings didn’t do the USD any favors as it spent most of the day retreating against its rivals. 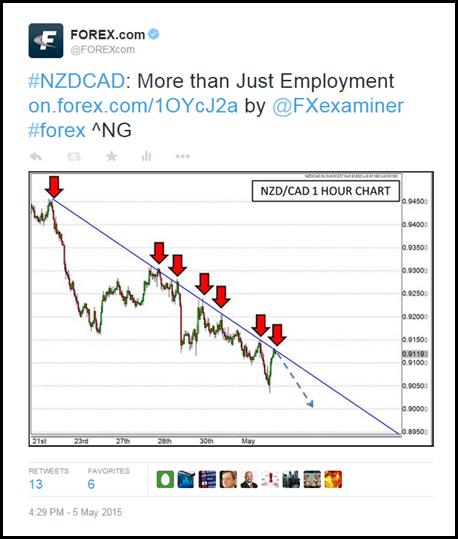 Neal’s second, and final, entry on our countdown highlighted the trend in the NZD/CAD, but also the importance of secondary employment figures for New Zealand.  Much like Average Hourly Earnings are gaining importance in the US, Labor Cost Index was doing the same in the land of the Kiwis.  Upon release of the employment data in New Zealand, the NZD ended up falling against the CAD almost precisely as Neal’s image indicated. 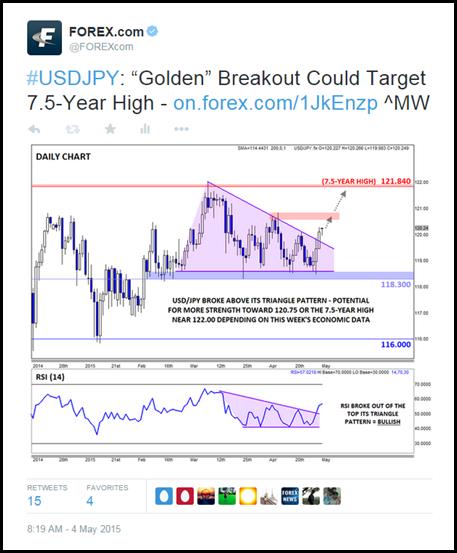 Matt’s second entry on our countdown will end up taking a bit more time to come to fruition due to its daily time frame, but it appears to be well on its way.  Previous to the NFP release, the USD/JPY began rallying above 120, but turned below soon after.  If Matt’s image is telling though, the breakout higher may have only just begun. 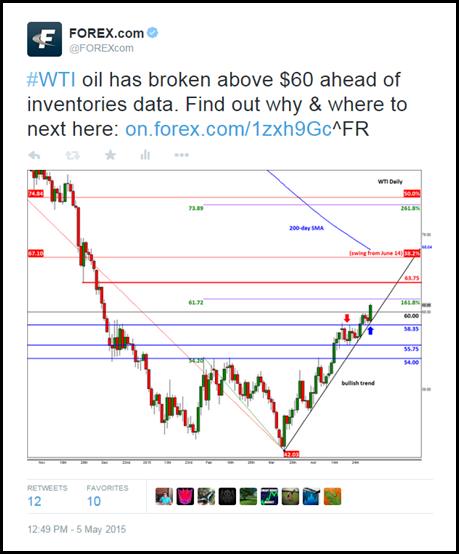 Fawad Razaqzada makes his first appearance on our list with his take on price action in oil.  The trend line in Fawad’s image failed to prevent WTI from falling the last few days of the week, but the support at 58.35 held, and potentially stands as a gathering place for a further rally next week. 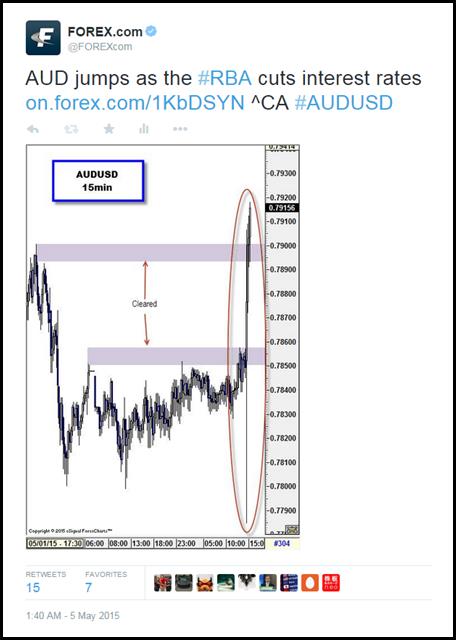 The price action in the AUD/USD was pretty crazy after the RBA decided to cut rates down to 2.00% early in the week as Chris illustrated in this tweet.  The cut ended up being a foregone conclusion, but the failure to indicate further cuts down the road led investors to feel better about the Australian economy than they had heading in to the meeting, hence the whipsaw price action. 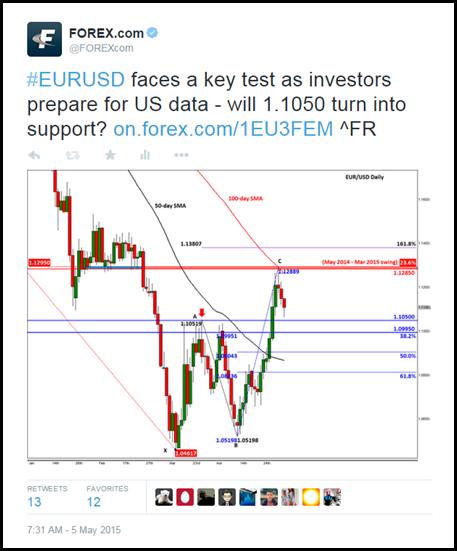 Fawad posed the question about 1.1050 in the EUR/USD turning in to support in this popular tweet, and boy did it ever!  The bounce off that support early in the week sent the pair to nearly 1.14 before settling down to end the week.  If the situation in Greece isn’t resolved to investor’s satisfaction this next week though, that support may end up being tested again by the time we reach mid-week. 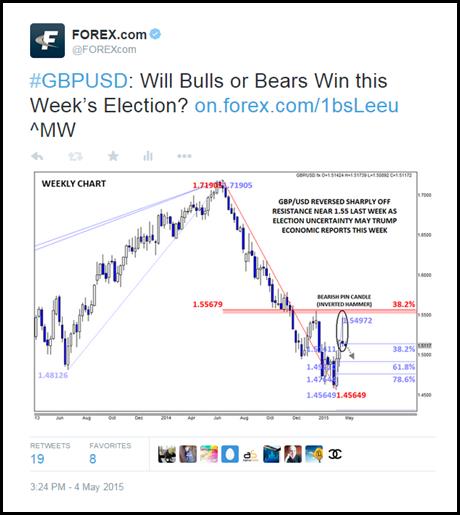 Matt provided the most popular tweet of the week for us with his query about the UK election.  As it turned out, the conservative Torries were the overwhelming victor in the election which helped the GBP/USD rally all the way back up to 1.55 before succumbing to profit taking.  Now that the election uncertainty is out of the way, will the GBP become a more popular destination for currency traders, or will the slide resume?  Perhaps Matt will give us his thoughts via tweet in the coming week.