GBP/JPY: on the verge of a major breakout?

The pound is little-changed ahead of the Bank of England’s latest policy decision, due at 12:00pm BST, in which the central bank is expected to hold monetary policy unchanged for an umpteenth time. Against the dollar, the pound has lost a bit of its post-election rally momentum after it was unable to hold ground above the 1.5500 resistance level on Friday, as my colleague Kathleen Brooks pointed out HERE. A decent US jobs report encouraged traders to book some profit on their GBP/USD positions on Friday. Although the near term outlook on the GBP/USD will depend at least partially on its ability – or lack thereof – to break above the 1.5500 level, the GBP is nonetheless showing strength against many non-USD currencies, such as the EUR/GBP, NZD/GBP and GBP/JPY crosses. The latter is our featured chart in today’s report.

The last time I covered the GBPY/JPY currency pair was about a month ago, on April 13. Then, as you may recall, the cross was testing a key support area around 175.50-176.30, where the prior low converged with a 61.8% Fibonacci retracement level. We said that, given the technical importance of that area, what the GBP/JPY did next there “could potentially determine the direction for the remainder of the week.” But as can be seen from the updated chart, below, not only did it bounce back strongly from there, as we had envisaged, it went on to clear all the resistance levels we had identified on that chart. Whereas then it was testing a key support area, now the GBP/JPY is testing a key resistance area around 184.25 to 185.00. Once again, a 61.8% Fibonacci level converges – but this time – with a prior high (rather than a low) in close proximity here. Therefore, what happens next could determine the direction for at least the near term.

Although the GBP/JPY did try to break out on Friday, profit-taking ahead of the weekend prevented it to post a decisive close above the upper end of the 184.25-185.00 resistance level. In fact, it closed right at 185.00. Nevertheless, we think that the GBP/JPY may have paved the way for a move to much higher levels now, although a potential break below the lower end of the aforementioned range (i.e. at 184.25) will invalidate this view in the short term. But our slightly longer-term bullish view will still remain valid for as long as the 181.00 support level holds on a closing basis. If the bulls win the battle again here and push rates decisively above 185.00 then it is worth watching levels where they are likely to take profit, as the rally could potentially fade around such levels. Typically, profit-targets are based around Fibonacci levels or levels that had been support and/or resistance in the past.  As such, it is particularly important to watch the December high of 189.70, should we get there, along with the several Fibonacci levels around that high as shown on the chart. If you would like to learn more about Fibonacci, please refer to our recently-written Fibonacci guide HERE . 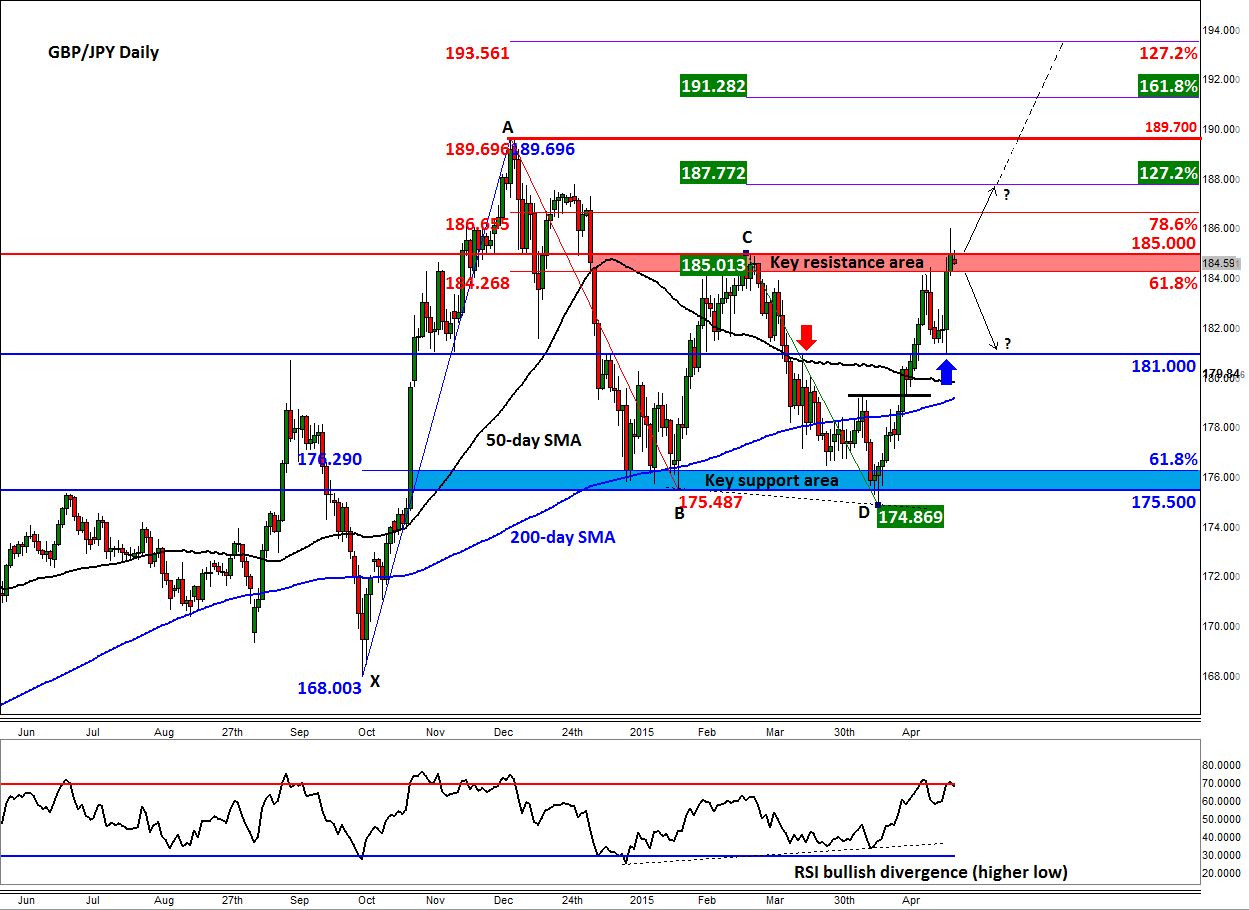