European stocks drifted in a quiet session on Monday with shares in Greece underperforming as its government tried to reach an agreement with the Eurozone finance ministers for a deal that would release bailout funds that the debt-laden nation desperately needs. Greece needs to pay the IMF €750 million by Tuesday with another €1.5 billion payment due in June and a further €3 billion to the ECB in July. So far, no deal has been struck, but there has been progress made in the talks according to some media reports. A failure by Greece to repay its lenders could send shockwaves through the financial markets, a risk which currently looks to be underestimated. With the major European indices holding near the record or multi-year highs achieved last month, investors evidently expect some sort of a deal to be reached soon.

Of course, it is not all about Greece and the hesitation today is in part due to the lack of any major economic news. But volatility should pick up as the week progresses with the latest industrial production number from China and the first quarter GDP estimates from Germany and the euro zone, all due out on Wednesday.

From a technical perspective, the Euro Stoxx 50 managed to remain inside its bullish channel despite the sharp sell-off at the start of last week. The index found strong support on Thursday from the 38.2% Fibonacci retracement level of the last significant upswing (point D to point E on the chart) around 3485. Consequently, it took out resistance at 3565 without much effort before rallying to – and stalling at – 3655 on Friday afternoon. This 3655 level was formerly a key support area, so the hesitation below this level today should not come as a major surprise. Going forward, it will be vital to watch the 3655 with keen interest because a potential break above this level could encourage fresh buying interest in our view.

However, if the Euro Stoxx 50 fails to find much follow-through in buying pressure around these levels on Tuesday then we may see a more profound correction later in the week. The pivotal levels to watch are again 3565 and 3485. If the latter fails to hold this time, the index could easily drop all the way back to the major support around 3300, which is where the 200-day moving average converges with a prior resistance-turned-support level. 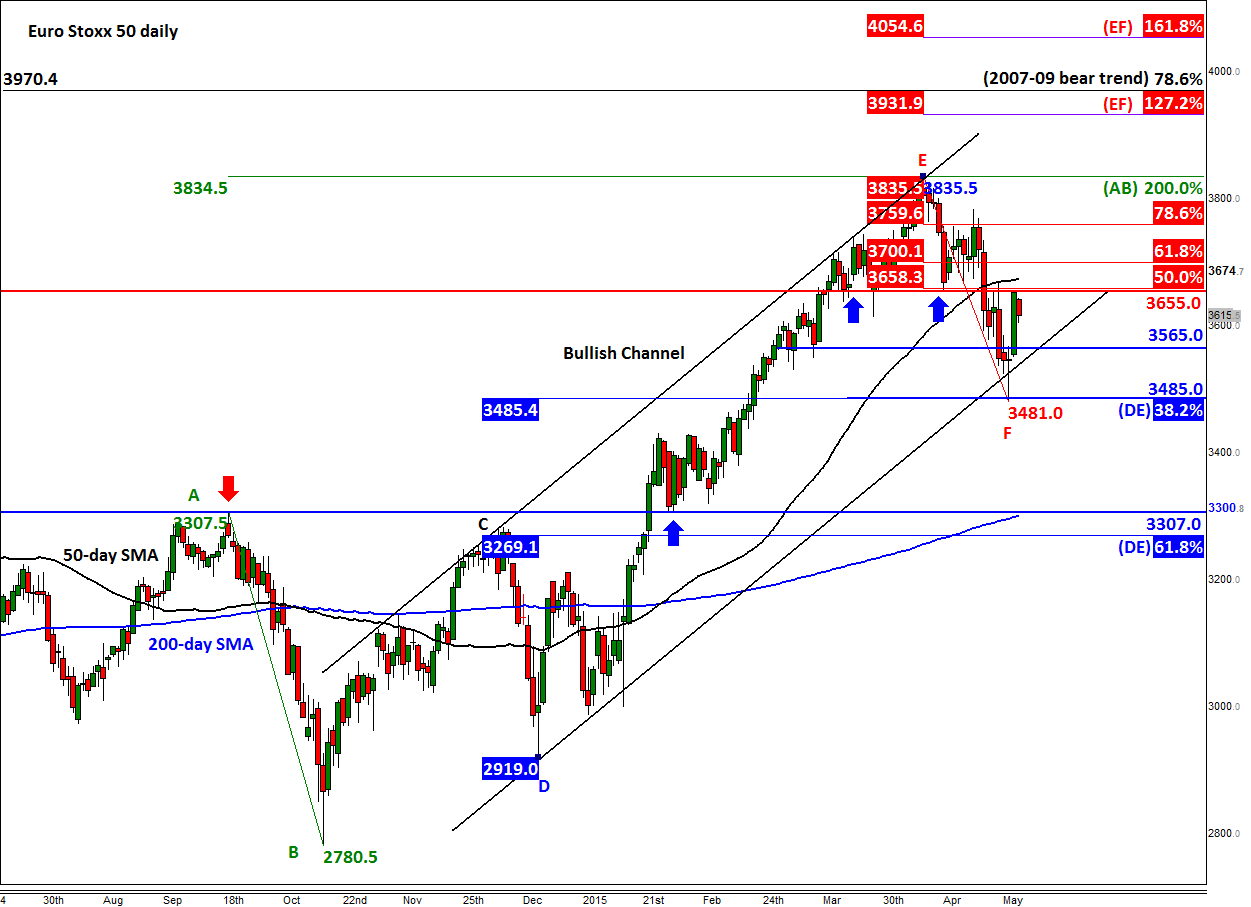