By definition, emerging market economies are smaller and more vulnerable than their developed market peers. As a result, EM economic performance can occasionally provide a leading indicator for growth issues that may eventually impact the global economy as a whole. In aggregate, EM economies have been growing consistently at about a 4.5% rate since mid-2012 and haven’t grown at a sub-4.0% rate since the depths of the Great Financial Crisis in ’09-10, providing a strong tailwind for overall global growth over the last 5 years. Unfortunately, this streak may soon come to an end, as early indications suggest that the annualized rate of EM growth dipped below 4.0% in the first half of this year. While this slowdown is likely temporary, especially as the impact of lower, more stable oil prices filter through the economy, it does have big implications for EM FX.

Most obviously, a potential slowdown in global growth could prompt EM central banks to hold off from raising interest rates. While this is hardly any different than the monetary policy expectations of most DM central banks, it does mean that yield-starved carry traders will plow money into any central bank that even hints at hiking rates; in other words, the “cost” (in terms of a rising currency) for central bank hawkishness is likely as high as ever and may lead central banks to continue to favor a “lower for longer” perspective on interest rates.

Russia’s central bank cut interest rates by a full 150bps just two weeks ago, but policymakers are no doubt uncomfortable with the continued strength in the ruble stemming from the central bank’s still-elevated 12.5% interest rate. In its most recent statement, the Bank Rossii expressed some concern with the elevated inflation rate (16.5% annualized in April), but stated that it expects inflation to drop back to its 4% target by 2017 and is ready to ease monetary policy further.

While Russia’s current high yield is attractive to carry traders, the central bank’s increasingly dovish outlook has caused the ruble to lose some its luster. USDRUB has consolidated just above support at the 50.00 level for a full month now, and as of writing, the pair is breaking above the top of its bearish channel at 51.00. Both the MACD and RSI indicators bottomed back in early April and are trending back to neutral territory, suggesting that the momentum is turning in favor of ruble bears (USDRUB bulls). As long as USDRUB holds above support at 50.00, a near-term rally toward 54.25 (the 23.6% Fibonacci retracement) or 57.50 (the 38.2% Fibo and 200-day MA) is favored. 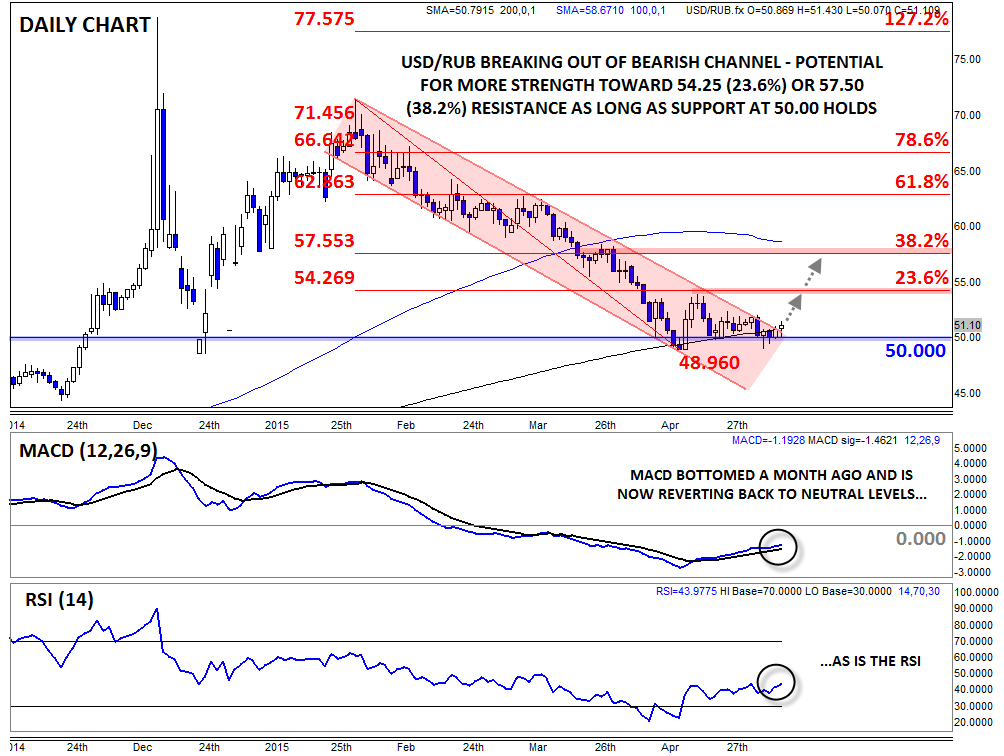