It seems the ASX200 may have found a short-term bottom around 5,600, after sliding around 400 pips since the end of April. The index was rejected around 6,000 numerous times in March and April before bears finally overpowered bulls. The ASX200 is eyeing off resistance around 5,700 at the time of writing (it’s up around 0.85% at the time of writing), but today’s modest rally isn’t enough to suggest that bulls have regained control of price.

• Leading the market higher is Qantas, which is up around 8.7% at the time of writing due to some well-placed words from CEO Joyce at an investor Briefing in Sydney, putting the stock at its highest level since September 2008. He highlighted the benefits to the airline from lower fuel prices and noted how the company is benefiting from its cost cutting program. The airline estimates that its fuel bill this FY will be $550m lower than it was in FY2013-2014 and it will benefit from $875m flowing from its ‘transformation’, while also noting that the softer Australian dollar is helping its international arm.

• In other news, NAB returned after a three day hiatus, briefly trading higher after its successful $5.5bn capital raising. Around 97% of eligible institutions had taken up their shares in the 2/25 renounceable rights issue at $33.80, amounting to around $2.7bn – the remaining retail component is on offer tomorrow. The shares briefly hit $34.83 before retreating to support around $34.50 – price at the time of writing is $34.60.

Big banks and miners are mostly up

• The remaining three big banks have been pushed into the green by bargain hunters. ANZ is leading the pack with gains or around 1.3%, with Westpac just trailing at 1.2% - CBA is up around 0.75% at the time of writing. Nonetheless, it’s the materials sector that is driving the market higher, with the big miners leading the charge on the back of stronger iron ore prices. BHP and Rio are up around 1.8% and 0.5%, respectively, at the time of writing.

• Telstra is a victim of the recent bond market rout, as the yield play dipped below $6.00 for the first time since January. Given the volatile conditions and the loss of yield appetite in the market, it would may be worth waiting a little longer before becoming bullish on this stock, even if it’s sub-6.

Has the ASX200 carved out a bottom?

The next big event for the market is the release of the Federal Budget tonight. Unlike last year’s budget, we aren’t expecting many surprises this time around. A lot of the meat of the budget has already been leaked/released, under an overriding theme of a retreating austerity narrative. So, this shouldn’t stifle any attempt by the bulls to regain control and may help return some confidence to the market. From a technical standpoint, it may be too early to get excited, at least while the pair is below 5,690/5,700 – this has been an important resistance zone in the past. 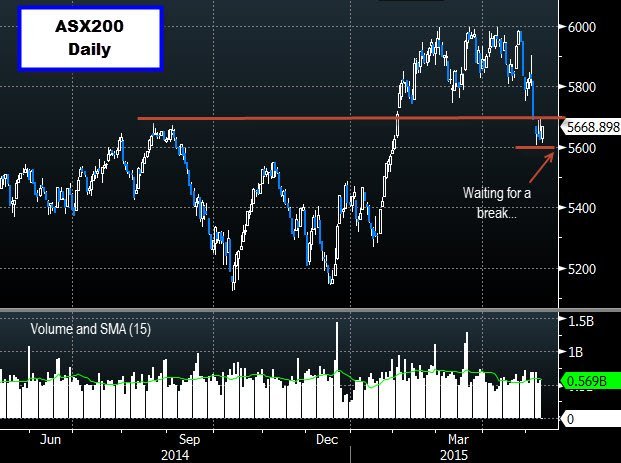