DAX: where to next for European stocks?

European stocks dropped sharply this morning, driven by another sell-off in European bond markets and a rally in the euro. Yields on the benchmark German 10-year bunds have risen sharply to 0.72%, a move that is unnerving investors involved in other assets too, including equities. But the sell-off in bond prices is not a major surprise to us, for after all yields were driven to extremely – and probably unjustifiably – low or even negative levels in recent past and were thus unsustainable at those extremes. On top of this, deflation risks have been reduced somewhat because of the rebound in oil prices, which reduces the appeal of safe haven government bonds. That said however the extent of the bond market sell-off is surprising nonetheless. After all, the ECB has only just started its colossal bond buying programme, which should keep yields under extreme pressure for another 1.5 years at least. Indeed, we are of the view that bond yields will probably head back lower soon, and this in turn may result in a rebound in European stocks.

Yesterday, we highlighted the fact that most of the European indices, including the Euro Stoxx 50, have managed to maintain their bullish trends despite the recent sell-off. The DAX index is no different. On Thursday of last week, the German index managed to bounce back as the buyers successfully defended the medium term bullish trend line around 11165. The resulting rally saw the index make back some 500-plus points as it hit a high of 11730 before pulling back over the next couple of trading days. It was thus unable to break above the upper end of the key resistance area between 11625 and 11750. This area was previously support. In addition, a short-term bearish trend line went through this region. Therefore, as things stand, the near term trend is still not very clear with the bears appear to be having the upper hand as far as the very short term direction is concerned. But as the medium-term bullish trend line is still intact, the bulls are not defeated just yet. Indeed, it is possible for the DAX to stage an equally sharp rally later on in today’s session or tomorrow as it arrives at key technical support levels. One such level is being tested at the time of this writing, namely 11380. As can be seen on the chart, this level corresponds with the 61.8% Fibonacci retracement of the upswing from last week’s low. Given the DAX’s tendency to react around the 61.8% retracement level, we wouldn’t be surprised if it were to form a base here. Beyond 11380 is the bullish trend line which comes in somewhere around 11240 and then last week’s low at 11165. A potential break below the latter could pave the way for the 38.2% Fibonacci retracement level of the last major upswing from the October low, at 10855. Alternatively, if the DAX stages a rally here and eventually breaks through the aforementioned resistance range between 11625 and 11750 then we could be talking about fresh records soon. 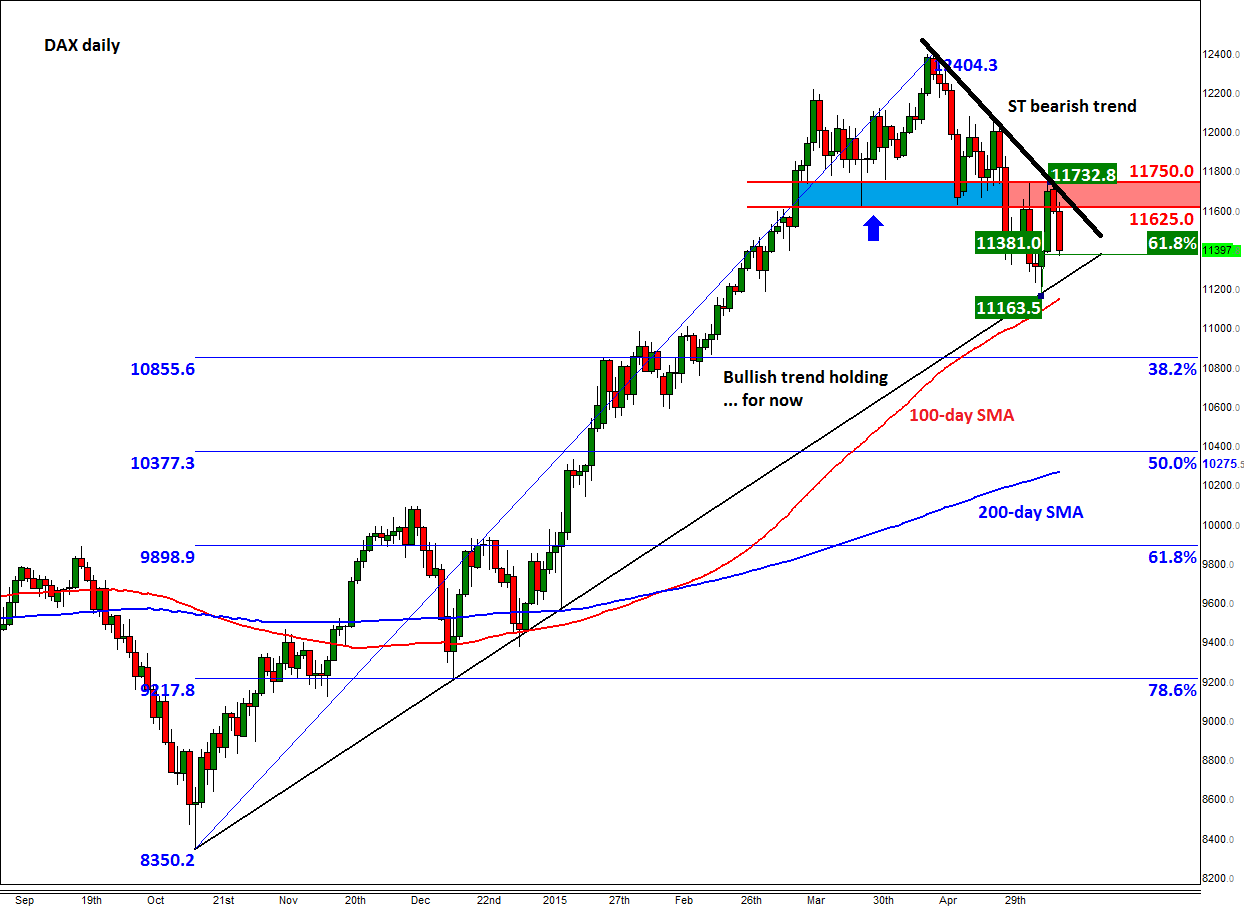