USDCAD: Ominous Clouds on the Horizon?

Beyond the relentless rise in global yields, there have two major themes to today’s global market trade: a drop in the value of the US dollar (see this morning’s report on NY Fed President Dudley’s comments for more) and a rise in the price of oil. Beyond the direct impact of the decline in the value of the dollar, today’s rise in oil has been driven by (who else?) OPEC, which raised its forecast for oil demand this year by 50,000 to 92.5M barrels per day. This rosier view of global energy demand was confirmed by the US Energy Information Administration, which increased its forecast for global energy demand by 190,000 barrels to 93.28M barrels per day in a separate report. The EIA’s rationale for the upgrade was that lower oil prices would stimulate demand growth more than previously expected.

Of course, any time oil prices change, traders draw a straight line to the movement in oil-dependent currencies like the Canadian Dollar, Norwegian krone, and Russian ruble, each of which is rising against the greenback today. As we go to press, USDCAD is showing a particularly interesting technical setup.

Two weeks ago, we highlighted the importance of the 1.20 support level in USDCAD (see “USDCAD: Why Today’s Integral (W.T.I.)” for more) and beyond two brief intraday dips, bulls have been able to defend that level. However, the pair has put in lower highs on each of its recent rallies, stalling out near 1.2200 in late April and then 50 pips lower around 1.2150 last week (see 4hr chart below). This price action has created a bearish descending triangle pattern on the 4hr chart. Adding to the ominous storm clouds for bulls, the 4-hour RSI indicator has broken below its corresponding symmetrical triangle pattern, foreshadowing a possible break below 1.1940 support in USDCAD itself.

In the short term, a neutral outlook on USDCAD is appropriate, but if oil prices continue to rise, the pair could break below the critical floor at 1.1940; in that case, a continuation down to the 200-day MA (not shown) near 1.1760 could be in play. Though it’s not our base case at this point, USDCAD could still break above the top of its descending triangle, especially if WTI drops below support at 58.00, potentially opening the door for a USDCAD rally toward 1.2200 or 1.2300. 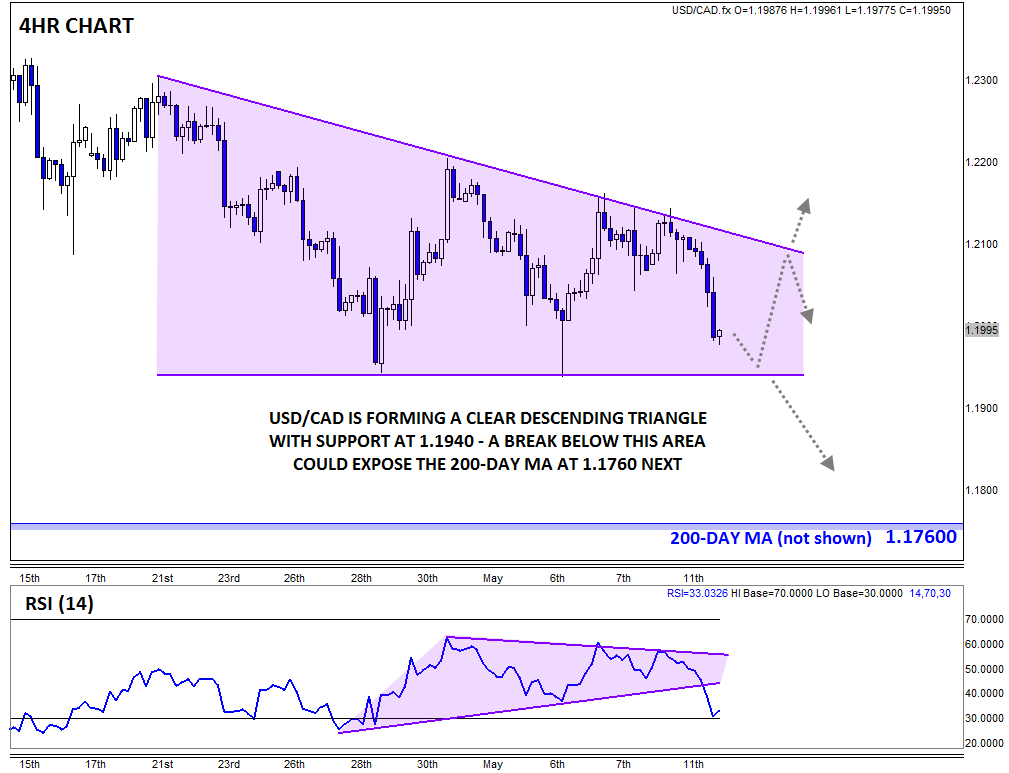