NZD is clutching at straws

The Reserve Bank of New Zealand (RBNZ) has announced plans to introduce lending restrictions for Auckland’s overheated property market. Investors who want to purchase residential property in Auckland will have to fork out at least 30% as a deposit to access any bank loan from October 1. The move is designed to cool Auckland’s rampant property market, home to a third of NZ’s 4.5 million residents, after the RBNZ ruled out raising the official cash rate due to soft price growth in the broader economy. In fact, we have always stated that the use of macro-prudential tolls, such as the ones just announced, to cool the property market will open the door for further easing to support the broader economy.

The NZD initially had a negative reaction to today’s announcement, before the currency rallied. This is becoming a common sight in the aussie and kiwi, whereby the currency does one thing on the back of data or a central bank related event, before reversing its course (watch stop placements in this kind of unpredictable environment). However, we still the risks are tilled to the downside for the kiwi on the back of looser monetary policy beyond the market’s expectations, or at least a cut sooner than the market expects. Today’s rally can be partly explained by a US dollar sell-off and some concerning comments from Wheeler about Auckland’s housing market.

From a technical perspective, NZDUSD remains in an overall downward trend and our bias is lower whilst it’s in this trend. In the near-term, it’ll be interesting to see if price can hold a break of its 100hr SMA and an important horizontal support, turned resistance zone. On the downside, we’re watching for a possible break of 0.7320 to instigate a push towards an all-important support zone around 0.7200. 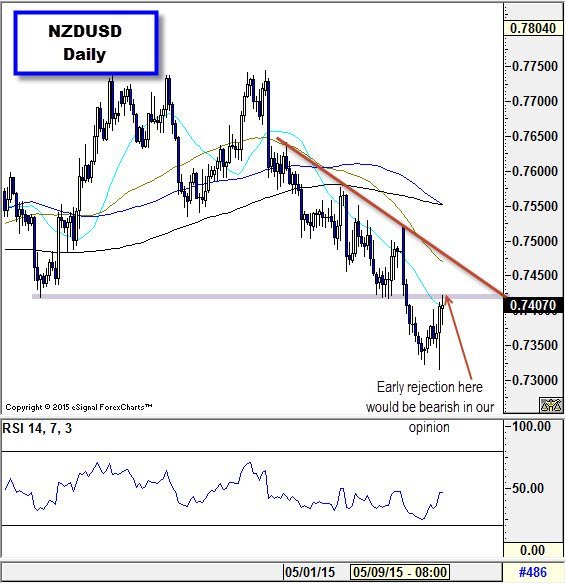