GBPUSD’s fortunes rest with the BOE

The labour market in the UK continues to deliver good news. The level of unemployment fell for another month, while the employment level continued to rise. To put this in perspective, the unemployment rate was 6.8% a year ago; today it stands at 5.5%. Pay also rose by 2.2% excluding bonuses, which is the fastest rate of pay growth since June 2011.

A strong labour market has helped GBPUSD to extend recent gains above 1.5700, and GBPUSD is still comfortably above the 200-day sma as we lead up to the Quarterly Inflation Report later this morning. Whether or not the pound can sustain its recent uptrend could depend on what is included in the QIR. The pound seems to be expecting a hawkish tone from the BOE, but we think that the market could be disappointed, and the BOE may err on the dovish side for a couple of reasons including:

A neutral/ dovish stance from the BOE could knock sterling off its perch later today, especially since the UK’s Gilt yields have been outpaced by German and US yields in recent days. Key support lies at 1.5619 – the 200-day sma – and then 1.5525. We don’t think that a more neutral stance from the BOE will trigger a prolonged sell-off in GBP, rather a bout of profit taking, before the market makes another attempt at 1.57. Momentum seems to be on the side of the pound right now, which could lead back to 1.60 in the next few weeks.

Elsewhere, Germany had a double whammy of bad news in the last 24 hours. First off Bayern Munich were knocked out of the Champions League semi-finals by Barcelona last night, then this morning Q1 GDP disappointed expectations, rising by 0.3% in the first three months of the year. Germany was the weakest link in the Eurozone with France, Portugal, Italy and Spain outpacing German growth. Even Greece managed to surprise on the upside, even though growth fell by 0.2% in Q1, which means that Greece is back in a technical recession.

Stocks are making hay while the sun shines (quite literally in London). Stocks are clawing back some of the week’s earlier losses as global bond markets stabilise. This is not to say that stocks do not remain at risk. The 10-year UK Gilt yield fell 5 basis points earlier today, but is back testing the 2% mark after the better than expected labour market data, if this continues then stocks may struggle this afternoon. As you can see in the chart below, yields and GBP tend to move in the same direction, thus continued upward pressure on the Gilt yield could lend support to the pound. 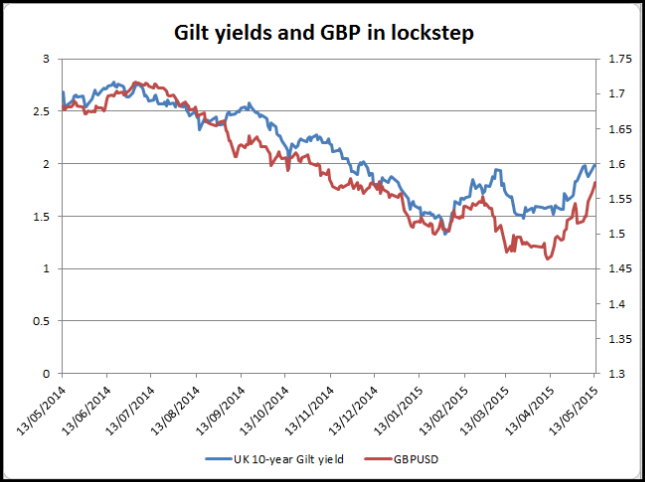