Precious metals are trading higher across the board today, supported in part by a slightly weaker dollar. The US currency has fallen back in part because of the recent strong rally in the British pound, as result of the surprise outcome of the UK election, and as the euro rebounded yesterday following a three-day sell-off. But both the euro and the pound could come under pressure again, which could lend some support to the dollar and in turn weigh on buck-denominated precious metals. The latest data out of the Eurozone has been far from impressive, with economic growth in both Germany and the euro zone missing expectations. Despite a generally weaker euro, the German economy grew just 0.3% in the first quarter compared to 0.5% expected. This meant that the euro zone economy as a whole would expand by a less-than-expected 0.4% in the first three months of the year. On top of the GDP miss, the latest industrial production figure for the single currency bloc showed a negative 0.3% change month-over-month this morning, when a small positive reading was expected. The dollar will be in focus again this afternoon as we have the key US retail sales data to look forward to at 13:30 BST (0.8:30 ET). If the dollar fails to find support from the data, then commodities that are priced in the US currency may consequently rally. Gold and silver may find additional support from safe haven buying if the stock markets sell off, which does not look too improbable, given, for example, the on-going situation in Greece.

Meanwhile the latest economic data from China missed expectations overnight, which points to a somewhat weaker-than-expected demand for commodities from the world’s second largest economy and industrial powerhouse. But that being said the 5.9% year-over-year increase in industrial demand last month was not too far off the expected reading of 6.1%. More importantly, it actually represented a growth from the prior reading of 5.6% in March. Nevertheless, the generally weaker Chinese macroeconomic pointers of late, in particular factory data, do not bode well for silver because of the precious metal’s other main usage i.e. as an industrial material. If economic data continues to deteriorate in China then this may expert renewed downward pressure on the price of silver.  But in the very long-term outlook, silver remains one of my favourite commodities as I expect a considerable price increase when the global economy and inflation return to normal levels. Jewellery demand for the metal is likely to increase further as the world’s population grows and gets richer. Meanwhile silver’s recycling rate will likely remain low and this will put pressure on the above-ground supply of the metal in the long-term. The trick, as always, is to know when prices have bottomed.

Anyway, swinging back all the way to the immediate outlook for silver, the metal’s next move may become somewhat more predictable depending on what it does around the key resistance level of $16.70, which is being tested as we go to press. This, as can be seen on daily the chart, is where a long-term bearish trend line meets the recent range highs and the 61.8% Fibonacci retracement level of the downward move from the March high. Thus, if this level gets broken, it would mark a significant bullish development in the near-term outlook. As a result, silver may then easily rally towards the next logical resistance levels around $17.00/05 – the 200-day moving average – and $17.30/40, which corresponds with the March peak and the 61.8% Fibonacci retracement level of the downswing from the January high. However, if the bearish trend holds firm once again, which is our base case, then silver may drop back towards it 50-day moving average at $16.30, horizontal support at $16.20 or even the short-term bullish trend line around $16.00, before deciding on its next move. 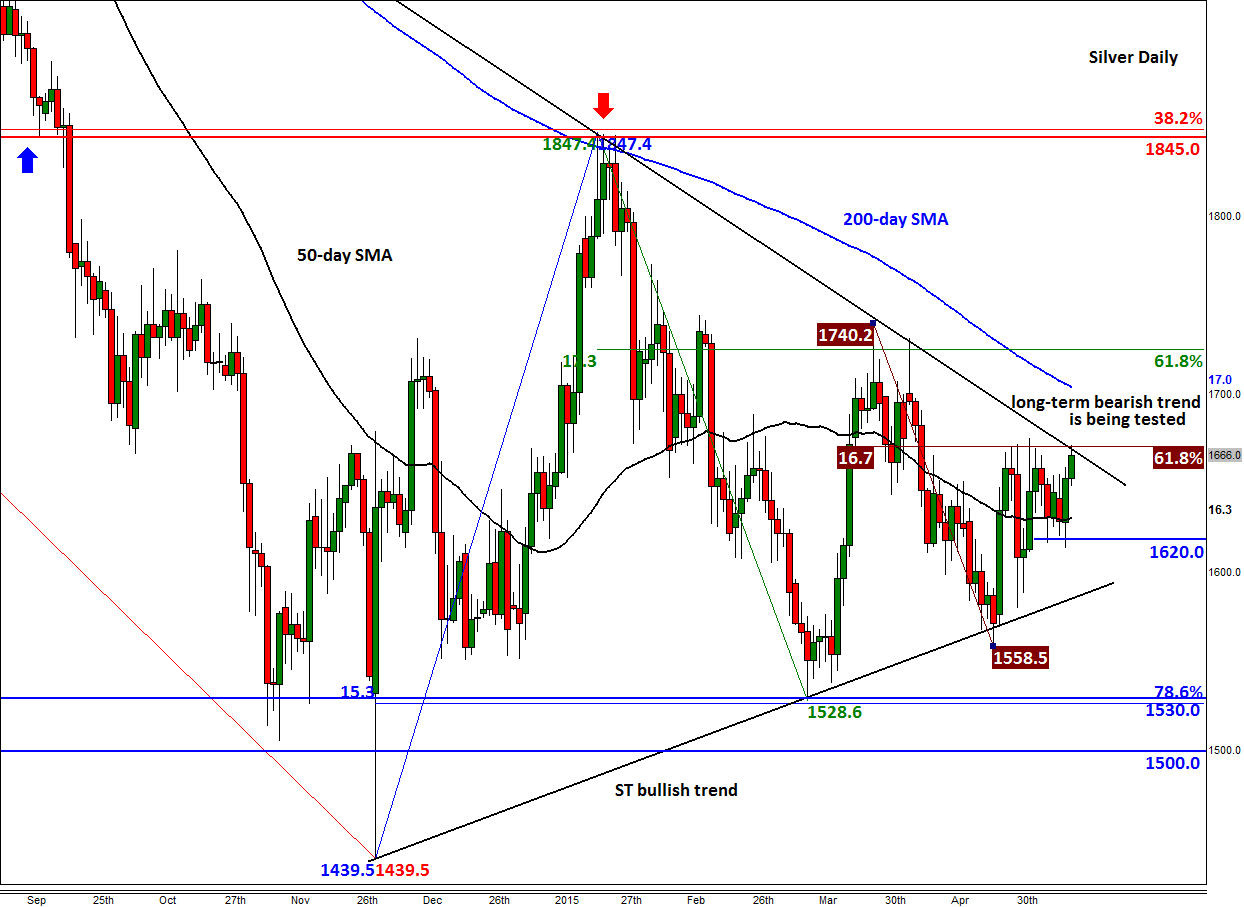