The US stock markets have surged today, tracking gains seen across Europe. It is not clear why sentiment has turned this bullish all of a sudden, but the unexpected drop in the weekly jobless claims to 264,000 may have been a factor. The 4-week moving average of claims has consequently fallen by a further 7,750 to 271,750, which is the lowest level since the year 2000. This has undoubtedly removed some pessimism about the health of the world’s largest economy, giving rise to a relief rally in stocks. On top of this, the European Central Bank president, Mario Draghi, has played down talks that the ECB could slow the pace of its €60 billion asset purchases program before the planned end date of September 2016. Given that inflation in the euro zone is literally non-existent at the moment and therefore very far from the ECB’s target of below but close to 2%, QE is likely to remain in place for some time yet. Indeed, Mario Draghi said that the ECB “will implement in full our purchase programme as announced and, in any case, until we see a sustained adjustment in the path of inflation.” This is music to the ears of the European stock market bulls, make no doubt about it.

But the key question is whether this latest rally in the US markets can be sustained, or once again falter as the major indices near their previous record highs. As the 4-hour chart of the S&P 500 shows, below, every time the index has tried to break through the sturdy resistance area around 2120, it has simply been thumped back down. But clearly, the bears have thus far been reluctant to increase their positions meaningfully when a key support level has been broken. One recent example of this was the temporary breakdown of the 61.8% Fibonacci retracement level at 2072, which only led to a continuation to 2062 (point A on the chart), before the bears retreated en masse. Similar bearish moves since then have likewise lacked any major momentum – the last notable downward move from point B ended (at point C) near the 61.8% Fibonacci retracement of the AB swing.  The resulting price action in this large consolidation pattern has created a series of higher lows in what essentially has been a messy bull-bear battle. Thus, the longer term upward trend has been maintained for the time being. As a result, the S&P may after all be able to rally to fresh all-time highs soon. Indeed, if it does break higher, the next move could potentially be explosive due to the significant amount of time the index has spent in consolidation. Undoubtedly some bullish speculators are also waiting on the side lines until the index breaks decisively higher; this would effectively fuel the potential rally. Likewise, if the index fails to break higher and eventually takes out the bullish trend line, the potential move beyond that could be equally sharp as the exiting bulls rush for the exits and new sellers join in. 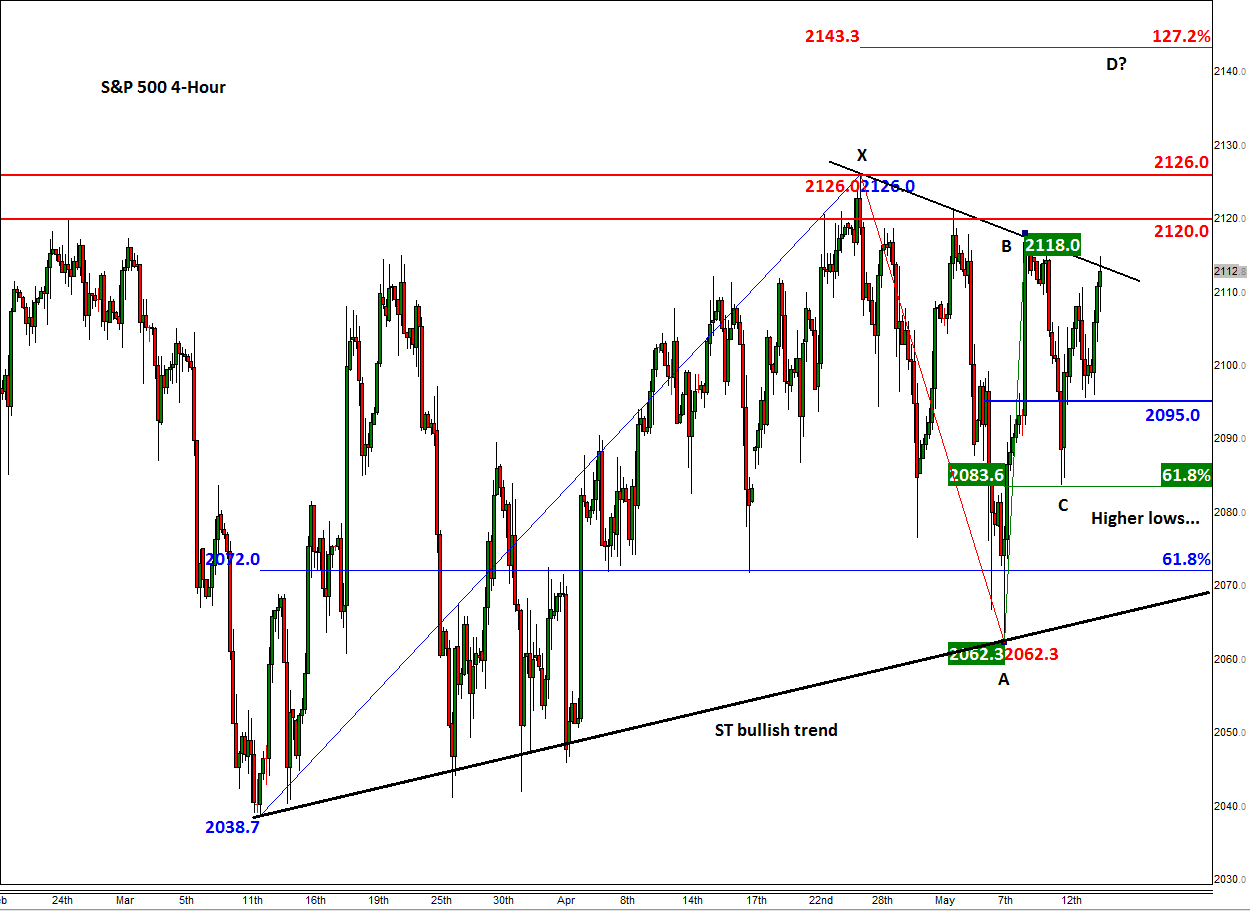