The People’s Bank of China is attempting to balance the needs of China’s export market with the need to stem capital outflows from its capital markets. It’s a delicate game and a misstep in either direction could severely harm China’s fragile planned economic deceleration, triggering an economic crisis in the world’s second largest economy.

Recent trade figures highlight how soft China’s export market has become, with exports falling 6.4% y/y last month, completely missing an expected 1.6% gain, and imports falling 16.2% over the same period, also missing expectations. While earlier soft trade numbers can be blamed on Chinese New Year celebrations, we’re too far past it for it to be a dominating factor anymore.

Meanwhile, around $300 million has left China’s economy in the last six months. China had looked like an attractive place for hot money – investors seeking quick gains in stock and bond markets - but it isn’t anymore. The government’s anticorruption crackdown and fears about its economy has sent money pouring out of China. While we’re not at crisis levels yet, it’s still concerning as it raises even more questions about the health of China’s real economy.

The PBoC could counter these outflows by tightening monetary policy, but that’s not really an option at the moment. The bank has a clear easing bias – it has cut interest rates three times in the last six months – as it attempts to stimulate domestic lending and demand. To avoid some of negative implications of lower interest rates the PBoC can cut the amount of capital that banks are required to hold in reserve (RRR), which it has, but this doesn’t encourage capital to stay.

Another option is that the PBoC can strengthen the exchange rate to deter capital outflows, but it risks placing even more pressure on China’s already vulnerable export market. The decline of the euro and the yen have been a major problem for Chinese exports, thus if it were to significantly strengthen the yuan against the US dollar as well it may doom trade exposed sectors of the economy.

The PBoC has been lowering USDCNY’s reference rate since around mid-March but the spot rate remains around the same level, apart from a big slide which kicked-off the aforementioned reference rate tightening cycle and looked suspiciously like PBoC intervention to us. This is bringing the spot rate closer and closer to the pair’s artificial ceiling – set by the PBoC 2% away from its reference rate (see figure 1). The market has been balancing looser monetary policy in China with US dollar weakness on the back of a more dovish Fed. 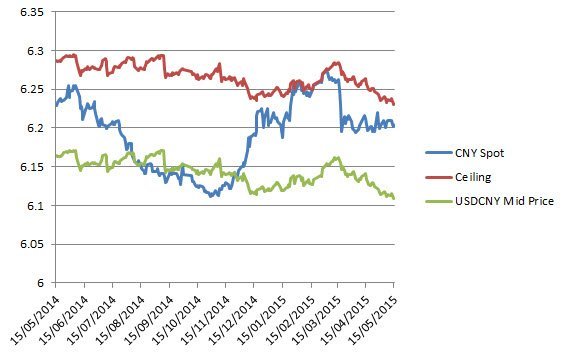 At the beginning of the year the market wanted a weaker yuan than the PboC would allow. As we can see in figure 1 the CNY spot rate was continuously testing the top of its trading band and figure 2 shows us that CNH spot (offshore yuan) was consistently above CNY spot. This pressure eased as the market pushed out its expectations for tighter monetary policy in the US, which has weakened the US dollar, and weighted the possibility of the PBoC intervening to strengthen the yuan. 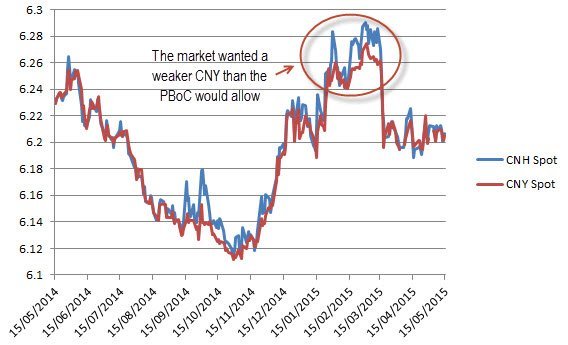 It appears the PBoC is more concerned about capital outflows that it’s willing to admit. It continues to drive USDCNY’s midpoint lower, despite the market’s resistance and the threat this possess to its export market. So, while we see weaker fundamentals for the yuan on the back even more policy loosening in China, the PboC may not allow USDCNY to appreciate much. Accordingly, we may see USDCNY retest the top of its trading band soon…