European stocks markets are higher across the board today, tracking the sharp gains seen on Wall Street yesterday when the S&P 500 closed at a fresh record high. Sentiment has been soothed by Mario Draghi’s comments regarding QE, namely that the ECB will "implement in full" its bond-buying programme and that it will stay in place "as long as needed."  As well as stocks, government bond markets are also calmer following the recent turmoil. The benchmark German 10-year bond yields have dropped by 6.4 basis points, although at 0.63% they are still much higher than 0.16% recorded before the sell-off that began at the end of April. As we have said previously, the extent of the bond market sell-off was surprising. After all, we argued, the ECB has only just started its colossal stimulus programme, which in theory should keep yields under extreme pressure for another 1.5 years at least. Indeed, I still hold the view that bond yields will probably head back further lower soon not least because of the lack of inflation in the major economies (inflation being  zero in the single currency bloc), and this in turn may result in a sharp rebound in European stocks. Sentiment also got a boost yesterday from news US unemployment claims fell unexpectedly to 264,000, which pushed the 4-week average to a fresh 15-year low. As this is a leading indicator for employment, it has undoubtedly removed some negativity about the health of the US economy, hence the record closing high on the S&P yesterday and the rebounding dollar today. If the UoM consumer sentiment also shows a surprisingly good reading this afternoon (it is expected to print 95.8 vs. 95.9 last time) then these assets could extend their gains further.

The sharp rebound in the stock markets has caused the European indices to post interesting reversal-looking patterns on their chart. That said however, some of these indices are yet to clear their respective key resistance levels, which must be cleared first in order for fresh buyers to take notice. Take the DAX as example. As we have reported previously, the German index has managed to bounce twice now from its medium term bullish trend line, finding additional support around 11230. But so far it has been unable to clear the resistance trend of an apparent bull flag and resistance area between 11625 and 11750, which was previously support. Therefore, as things stand, the near term trend is still not very clear and what happens next could determine the near-term direction. But as the medium-term bullish trend line is still intact, the bulls are still in charge. Indeed, if the index does break above the aforementioned resistance range then it may go on to rally all the way to the 61.8% Fibonacci retracement at 11930 before making its next move. We wouldn’t be surprised either if the index were to hit a fresh record high, even before the end of this month. But, we would equally not be surprised if the DAX were to head back lower from this 11625 resistance area once again. We are therefore waiting for price action to guide us in terms of near-term direction: a potential break above 11625-11750 would be very bullish in our view, while a decisive break below the bullish trend would be bearish. 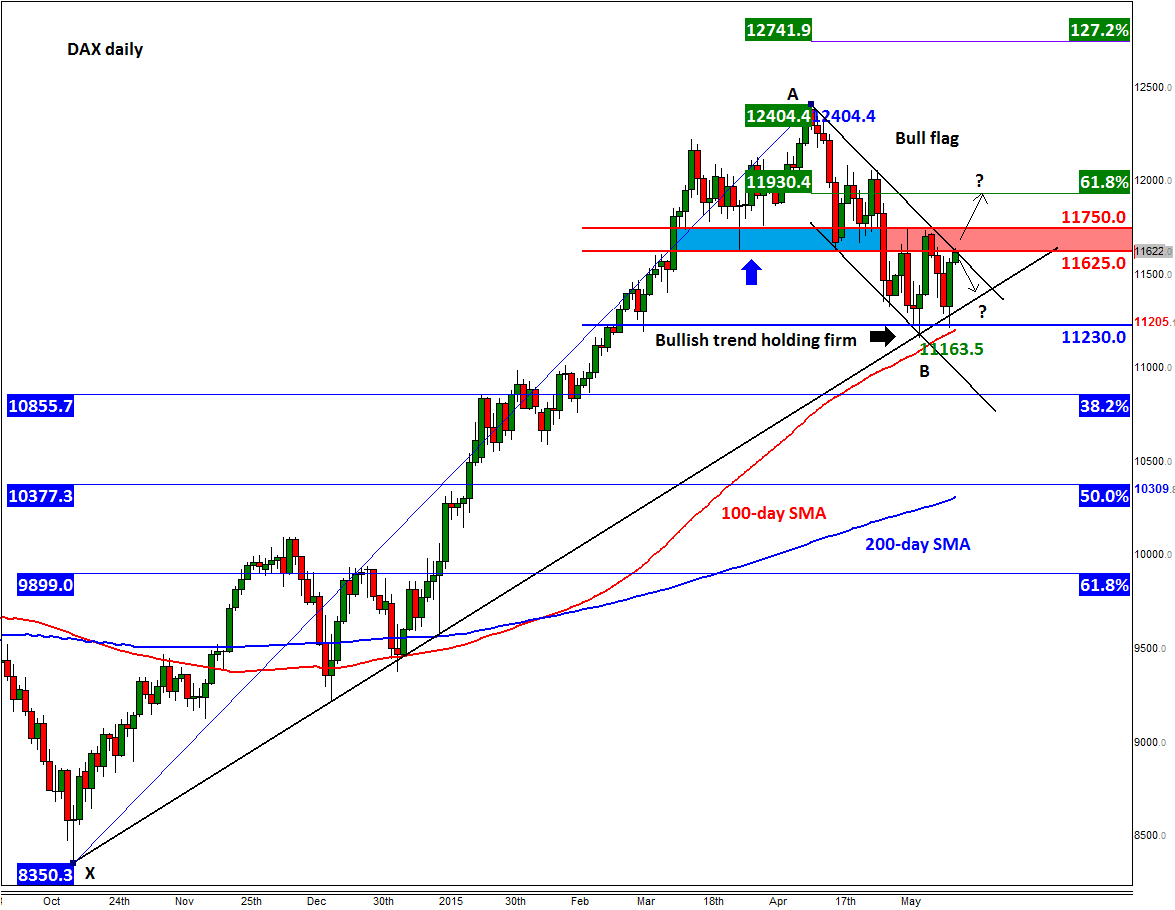