NZDUSD: the kiwi is hit again

The NZ dollar cannot escape the idea that the RBNZ is going to loosen monetary policy. The kiwi has been assaulted by sellers this morning after the NZ government announced new plans to curb property prices, leaving the central bank free to support the broader economy. This resulted in NZDUSD erasing most of its gains on Friday night due to soft US consumer sentiment data.

The NZ government announcement plans yesterday to tax residential property at a rate of up to 33% if sold within two years. This tax is designed to cool property prices in Auckland which have been a major point of concern for the government and the central bank. If this tax is successful in deterring people from speculating in Auckland’s property market, it would free up the central bank to loosen monetary policy to support the broader economy, keeping in mind the RBNZ has already announced plans to introduce lending restrictions for Auckland’s overheated property market and a dovish bias on rates.

NZDUSD dropped around 0.5% at the open, but the pair has since regained some of this lost ground. At the moment it’s testing some resistance around 0.7460, but our bias remains lower in the medium-term. We’re keeping a close eye on the RBNZ’s latest inflation expectations (due out tomorrow) and GlobalDairyTrade’s latest auction results (due out early Wednesday morning). Softer than expected inflation expectations could open the door for a rate cut in NZ much sooner than expected, given the diminishing threat to the economy presented by an overheated property market. 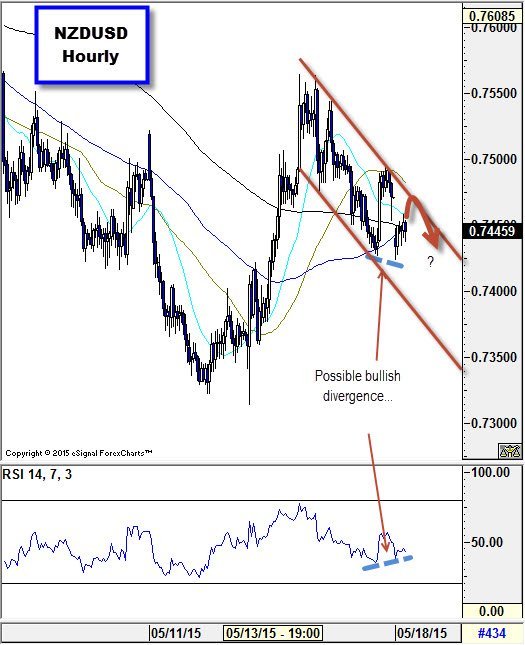