European stocks have extended their gains after yesterday’s key reversal day and as the S&P 500 hit a fresh record high. Today’s sharp rally has been in part inspired by comments from the ECB’s Benoît Cœuré who said that the central bank’s €60bn of monthly bond purchases would be increased slightly in May and June. Last week, Mario Draghi himself had said that the ECB will “implement in full our purchase programme as announced and, in any case, until we see a sustained adjustment in the path of inflation.” With the ECB reaffirming its commitment to QE, this is music to the ears of the European stock market bulls and also the euro bears. We are seeing both assets move sharply in their respective long-term trends today. News that investor confidence in the euro zone’s economic powerhouse has plunged in May, is preventing an even sharper rally: the German ZEW Economic Sentiment dropped 11.4 points – or 21% – to 41.9 in May from 53.3 in April. Needless to say, it easily missed the expected 48.8 reading. Meanwhile the UK economy has fallen into deflation for the first time since 1960 after the CPI unexpectedly dropped to -0.1% year-over-year in April from zero the month before. The news has weighed heavily on the pound, but not so much on the FTSE because of expectations that the BoE may now hold off raising rates even longer than was previously the case.

Nevertheless, the technical outlook for the European indices, such as the Germany’s DAX, is looking rather constructive and point to further gains in the near term. As we reported on Friday, the rebound at the end of last week saw the DAX once again hold above its medium term bullish trend line. This suggested to us then that a potential rally was on the cards, particularly as there was also a clear bull flag pattern visible on the daily chart. Though the index took its time, it has now taken out the upper trend of that bullish flag pattern. In the process, several resistance levels have been broken including 11625 and 11750 – the latter is now the key support to watch in case the DAX falls back. As before, our immediate target is the 61.8% Fibonacci retracement level of the last downswing at 11930. To get to this level, the DAX will first need to climb back above its 50-day moving average at 11835, which it is testing as we go to press. But as the bullish trend line has been successfully defended now, we wouldn’t be surprised if the index were to not only break the 50-day average and the 61.8% Fibonacci level, but rally to a fresh record high soon – perhaps, even before the end of this month. 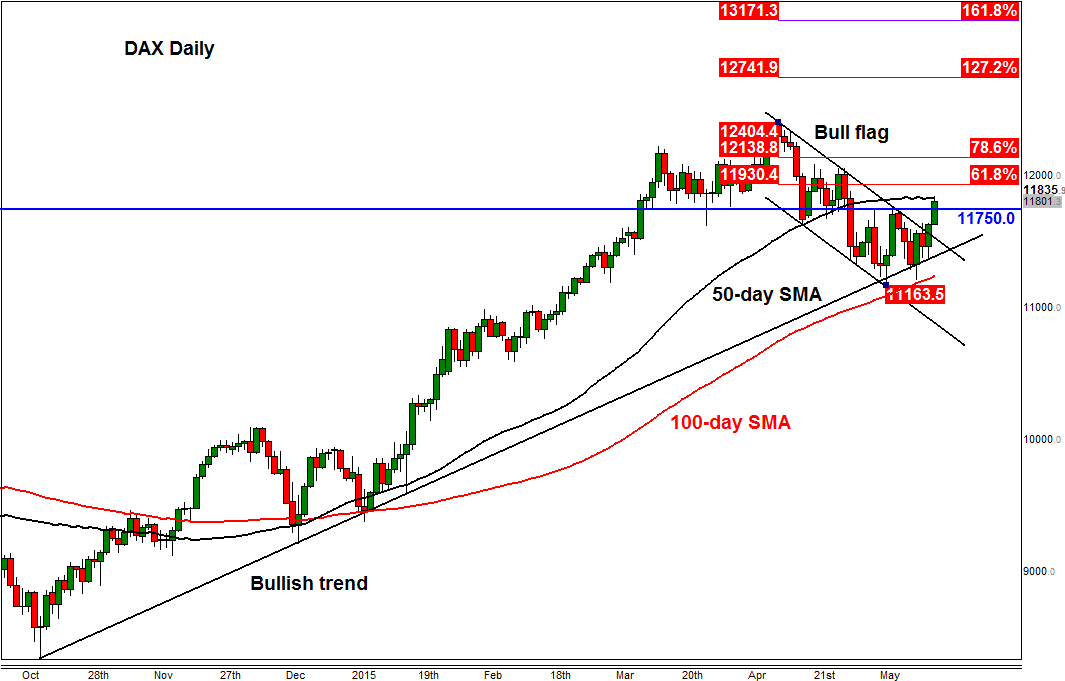