UK vs. US: Who will bite the bullet first?

The timing of interest rate moves from the world’s major central banks is likely to be the key driver of financial markets in the coming months. This could have particular significance for the FX market due to the importance of yields on the value of currencies.

GBPUSD could be significantly influenced by the timing of rate hikes from the Federal Reserve in the US and the Bank of England in the UK. This is because the UK and the US are expected to be the first of the major central banks to hike interest rates in the coming months. The crucial question for GBPUSD is who will hike first?

In recent weeks the prospect of a rate hike in the US has been pushed back. Earlier this year there had been a chance that rates could rise in June, however, after a spate of weak US economic data this has been virtually eradicated with less than 5 basis points of tightening now priced in for July. The market is expecting 30 basis points of tightening by December 2015, which is the equivalent of 1 25 bp hike.

Last week’s BOE Inflation Report suggests that the Bank of England is expecting to make its first rate hike in mid-2016, which would leave the Fed in pole position to hike rates first. This has been supported by recent economic data. After a spate of bad reports, the US economy is showing signs of strength, for example housing starts rose to their highest level since 2007 and employment remains strong. In contrast, the UK economy fell into deflation last month, which could delay a potential rate hike from the BOE.

This is significant for GBPUSD. As you can see in figure 2, the 10-year spread between UK and US bond yields has turned south after moving higher in the past month, which has weighed on GBPUSD. One reason why the spread has moved further into negative territory - where US yields are outpacing UK yields - is because of the recent weakness in UK data, particularly on the inflation front. It is also a reflection of growing expectations that the Fed will hike before the BOE. 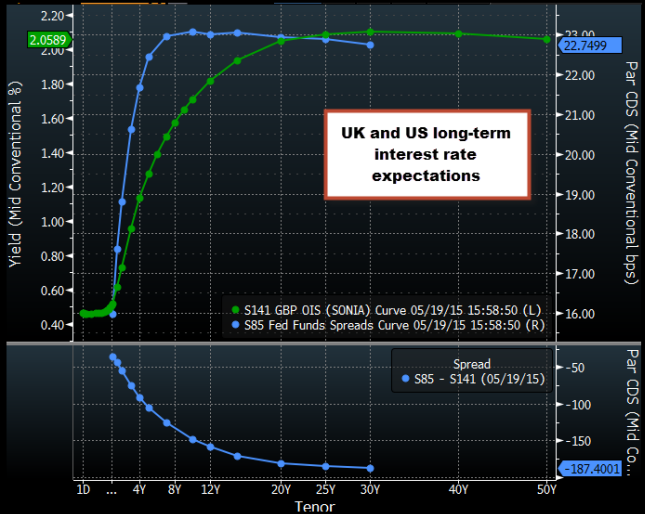 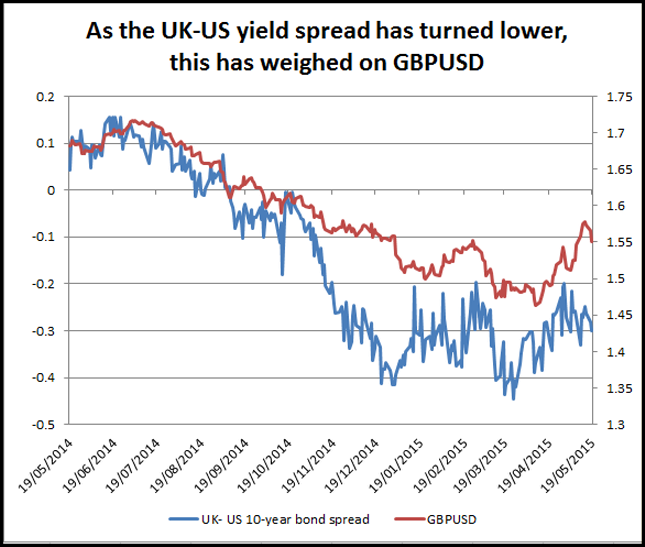