Gold’s Two Fundamental Drivers and the Odds of a Breakout

"The desire for gold is the most universal and deeply rooted commercial instinct of the human race."

For some reason, gold evokes more intense emotions for traders than any other financial instrument. Depending on who you talk to, gold is either the last real store of value amidst the final throes of the central bank driven fiat currency system…or a soft yellow rock with few industrial uses. Rather than dogmatically holding to either a permanently bullish or bearish outlook on any financial asset, we believe that traders that should keep an open mind and try to objectively analyze the fundamental drivers of gold.

Like any commodity, the price gold is determined by the interaction of supply and demand. While the supply of gold is relatively predictable in the short term, the demand for gold is rarely the conventional type of industrial demand that drives most commodities. Instead, gold demand is driven primarily by its attractiveness as an investment, which is in turn driven by real interest rates and the value of the US dollar. 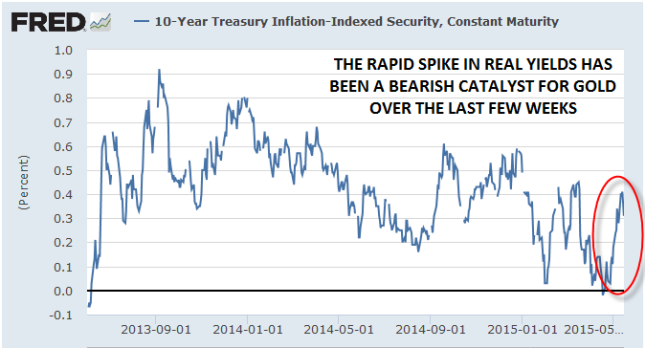 As the chart above shows, real yields have risen sharply after briefly touching the 0% level in mid-April. This rapid rise in interest rates has served as a big bearish headwind for Gold.

Fundamental Driver #2: The US Dollar

That said, the other major driver of gold’s price, the US dollar, has had the complete opposite impact. Of course, gold is denominated in US dollars on the international market, so all else equal, a decline in the value of the dollar would increase the price of gold in dollars and vice-versa. The dollar index, which measures the value of the US dollar against a trade-weighted index of six major rivals, has retreated from a high of 100.00 in mid-April all the way down to a low near 93.00 to start this week. The pullback in the buck has acted to support gold. 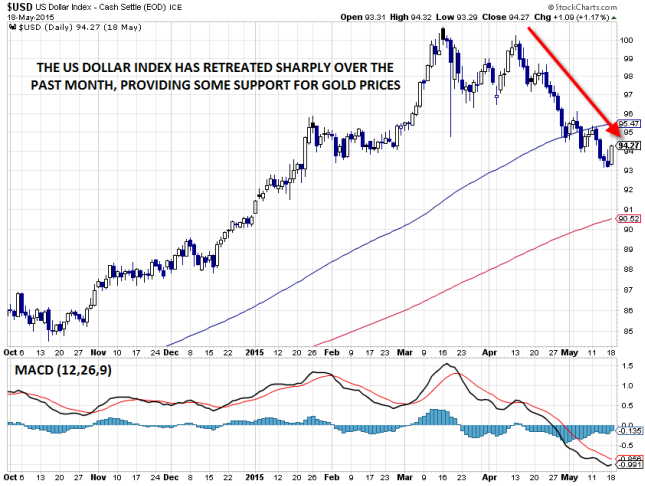 Based on the generally sideways trade in the precious metal over the last two months, the negative impact of rising real yields has been almost perfectly counterbalanced by the fall in the value of the US dollar. That said, we rarely see a prolonged period when US interest rates rise but the value of the dollar falls (see “The Curious Incident of the US Dollar and US Yields” for more), so the two factors will likely come into alignment sooner rather than later, perhaps around the Fed’s highly-anticipated mid-June meeting.

In the short term, yesterday’s Bearish Pin Candle*, or inverted hammer formation, shows an intraday shift from buying to selling pressure and suggests gold could continue to pull back this week. For medium-term traders though, all that remains is to stay patient and wait for a breakout from the recent 1180-1225 range, at which point a clear trend should form. If we see real yields fall back toward 0.0%, a bullish breakout and continuation toward $1245 (the 61.8% Fibonacci retracement) or $1270 (the 78.6% Fibonacci level) is likely; on the other hand, a renewed rally in the greenback could take gold below support at 1180, opening the door for a move down to the 4-year low at near 1130 next.

Either way, prudent traders should let the market help them decide how to trade gold, rather than blindly adoring or despising it.

*A Bearish Pin (Pinnochio) candle, or inverted hammer, is formed when prices rally within the candle before sellers step in and push prices back down to close near the open. It suggests the potential for a bearish continuation if the low of the candle is broken. 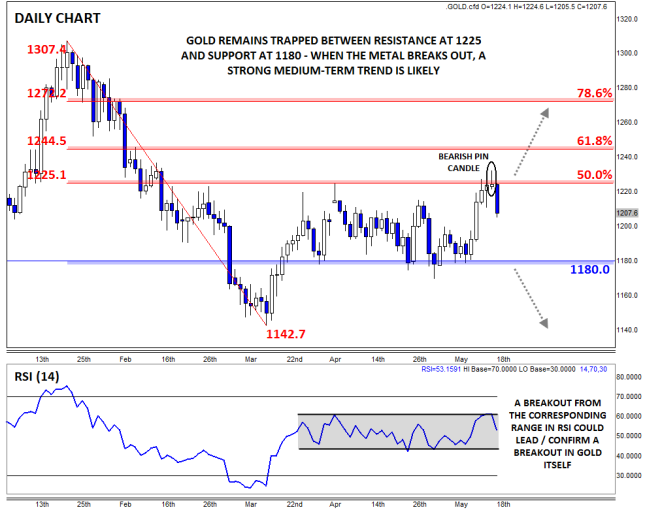