The Japanese economy grew an annualised 2.4% q/q in Q1 (0.6% q/q), beating an expected annualised growth rate of 1.6% q/q (0.4% q/q). This is a significant step-up from a 1.1% growth rate in Q4 and may help to quieten some Japan bears. In saying that, while today’s report will likely keep the prospect of further easing from the BoJ at bay for the time being, it isn’t game changing; Japanese growth figures are historically volatile and it’s too early to get overly excited just yet.

Nonetheless, we think Japan’s economy is heading in the right direction and the recovery should continue. Wage inflation appears to be heading higher as businesses become more confident about Japan’s economic outlook. If this trend continues we may see the market scale back its expectations for additional easing even further.

The yen didn’t react very heavily to Japan’s GDP numbers, although a move towards the US dollar has set some orders loose in USDJPY, with the pair testing resistance around 121.00. JPY doesn’t generally react very heavily to Japanese economic data unless it’s expected to have a significant influence on policy, and the market isn’t expecting much more from the BoJ at the moment.

From a technical perspective, USDJPY is testing an important resistance zone around 121.00 at the time of writing. The pair failed to break through this level in March and has been trading in a fairly tight range since then. A break of 121.00 may open a push towards all-important resistance around 122.00. However, our long-term technical bias remains slightly bearish below 121.00/122.00, with eyes on a key support zone around 118.30/50. A break of 118.00 may trigger further selling. 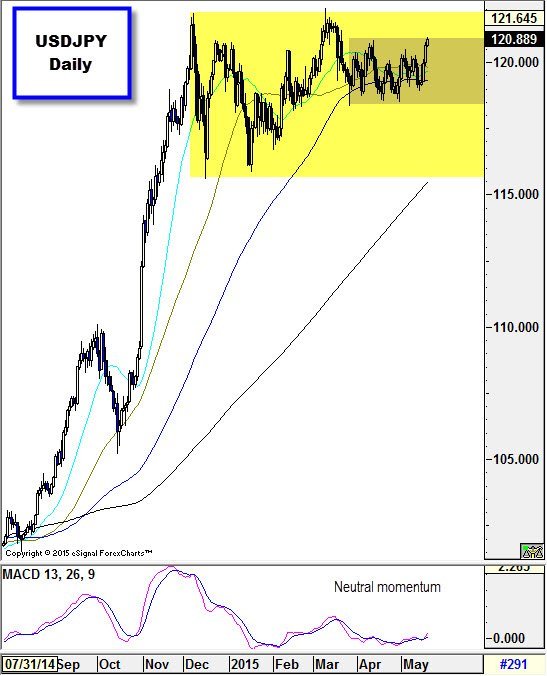