AUDUSD: the aussie lost its footing above 0.8000

It has been a fairly quiet session in Asia, apart from the release of Japan’s unexpectedly strong Q1 GDP numbers. Most of the majors are trading in fairly tight ranges, although a risk-on tone in the market is supporting the aussie and the kiwi. The Nikkei is the big winner in Asia, with the Index surging higher after Japan’s stronger than expected GDP numbers.

AUDUSD bounced off support around 0.7900, before settling around 0.7920. The pair has been on the back foot lately due to widespread US dollar strength and the return of the RBA’s easing bias, and it’s now testing trend line support (see chart). A break here could see AUDUSD test a support zone around 0.7865 and establish the recent high above 0.8150 as a cap.

The RBA used its meeting minutes to reintroduce an implicit easing bias, after removing it entirely from Governor Stevens’ statement following the bank’s policy meeting earlier this month. At the meeting the RBA cut the official cash rate to a record low 2.00% from 2.25%, citing an accommodative inflation outlook. The minutes reveal that the board weighed the possibility of waiting until June to cut interest rates, before ultimately deciding that sooner was better. The door is now re-opening to the possibility of even lower interest rates in Australia.

There has also been a push towards the US dollar, sparked by a sell-off in the euro. The spill over into the broader market has helped establish AUDUSD below 0.8000 and turn some technical indicators bearish. However, anything could happen with the release of the FOMC’s meeting minutes later tonight. Any indication that the Fed is looking more hesitant about raising interest rates than the market currently expects may encourage dollar bears.

The techs in AUDUSD aren’t overly bearish, but our bias it to the downside in the near-term if price breaks through trend line support (see chart). Beyond here we’re eyeing support around 0.7865 and then 0.7785. On the upside, a push above 0.8010 may inspire price over the medium-term. 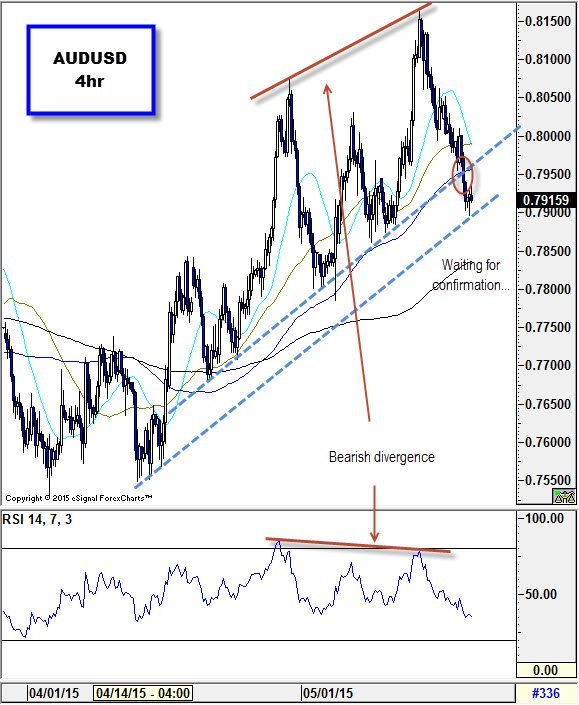